Given Americans' obsession with social media and general tendency to share, you'd think more people would be open to the idea of talking money. But apparently most U.S. adults feel more comfortable discussing religion, politics, and health issues than they do divulging details of their personal finances, according to a new TD Ameritrade survey.

Specifically, Americans are most skittish about discussing student loan debt, despite the fact that it's something that affects nearly 45 million borrowers of all ages nationwide. Second to that, U.S. adults are loath to talk about child care expenses, living paycheck to paycheck, credit card debt, and not having an emergency fund. 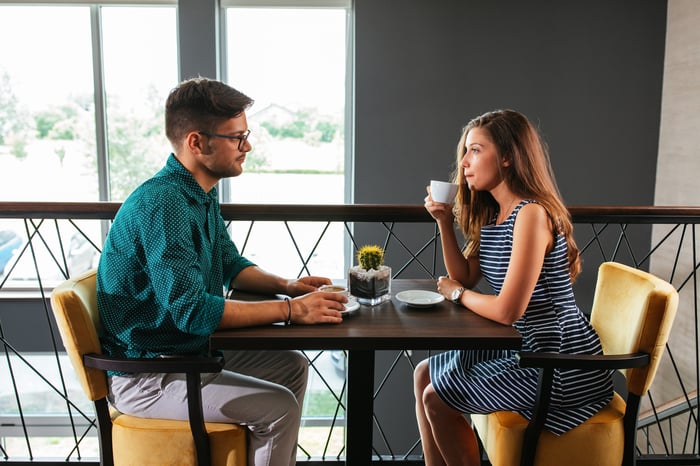 The problem, however, is that by keeping these topics under wraps, Americans lose the opportunity to seek out advice that could help them get their finances in order. And that's just not helpful.

The decision to keep money matters private boils down to a number of factors. In the aforementioned survey, some of those who don't talk about money stick to that rule because they don't want to come off as boastful. Others shy away from discussing finances because they don't want their peers to think of them as failures. And many feel it's just not polite to bring up finances in social settings.

The problem, however, is that a large chunk of Americans want to talk about money openly. That holds true for 37% of all U.S. adults, and for 63% of millennials. And 51% of all Americans and 71% of millennials think society would be healthier on the whole if people felt free to discuss personal finances openly.

If you're of the belief that there doesn't need to be a stigma attached to talking money, then why not start having those conversations with trusted people in your life? This especially makes sense if you're struggling and are seeking advice on how to get your finances in order.

If you're married, the best person to start with is your spouse. While Americans across the board are relatively open to the idea of talking to their partners about topics like cost of living, housing expenses, income, and retirement planning, they're less keen on divulging details related to student loan debt and child care expenses. But if you can't freely talk about money with a person with whom you're conceivably sharing bank accounts and expenses, then you're not doing either of you any favors. By being more open with your partner, you might manage to help each other tackle financial issues and meet individual and shared goals.

It also pays to discuss money matters with people you feel are in a position to help you. Those people could be colleagues, friends, family members, or even financial advisors. In fact, it pays to enlist the help of an advisor if you're having a hard time with money, because that person can offer an educated, unbiased, outside perspective that your friends or family members might struggle to provide.

A large number of Americans today are behind on emergency savings, short on retirement funds, and buried in credit card debt. And a frightening 75% live paycheck to paycheck. A good way to break these unhealthy patterns is to get more comfortable with the idea of talking about money freely, and with soliciting and accepting financial advice as needed.