Nearly $150 billion was spent on medicines for treating cancer in 2018, according to the IQVIA Institute for Human Data Science. Overall spending on cancer treatments, including supportive care, appears to be on track to soar to as much as $250 billion by 2023.

Fighting cancer is big business. And it has attracted some big companies. Of the 33 largest drugmakers in the world, 28 have some significant development underway that targets cancer. Other major companies that don't develop drugs are also playing a part in battling cancer.

The 10 biggest cancer-fighting stocks combined have a market capitalization worth around $1.7 trillion right now. Here's what you'll want to know about these top cancer stocks. 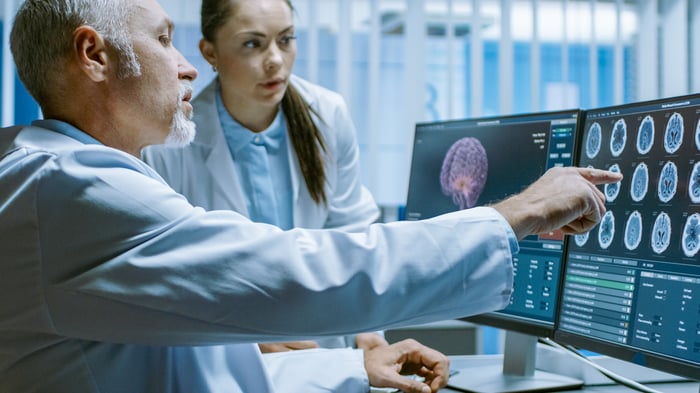 A quick overview of the fight against cancer

It's important to note that there are three primary fronts in the fight against cancer: prevention, diagnosis, and treatment.

Not every type of cancer can be prevented, of course. But the risks can be lowered for several types of cancer, particularly lung cancer. Using smoking cessation products, for example, can help individuals reduce their risk of developing lung cancer. Routine screening for colorectal cancer can help physicians remove polyps before they become cancerous.

Early diagnosis of cancer is also important in saving lives. Medical imaging equipment for CT scans and mammography play an important role in detecting cancer as do devices that help physicians obtain tissue biopsies from patients. Liquid biopsies (blood tests that detect cancer by finding DNA that has broken off from tumor cells) is likely to become increasingly important in the diagnosis of cancer.

Cancer treatments include a wide range of options from prescription drugs to surgery. Chemotherapies (drugs that are toxic to living cells, including cancer cells) have been the primary medication option for treating cancer for decades. However, immunotherapies that harness the body's immune cells to fight cancer have taken center stage in recent years.

What are the biggest cancer-fighting stocks in 2019?

Cancer-fighting stocks include those of any companies that are involved in the prevention, diagnosis, or treatment of cancer. However, this broad definition includes some stocks of companies that don't yet make a significant portion of their revenue from fighting cancer. The top 10 cancer-fighting stocks on this list only include the stocks of companies that report revenue details on their regulatory filings that directly relate to either preventing, diagnosing, or treating cancer. The size is based on a company's market capitalization (the total number of a company's shares outstanding multiplied by the stock's market price).

Here's what you need to know about each of these big cancer-fighting stocks.

Johnson & Johnson's oncology franchise generated $9.8 billion in sales in 2018, nearly one-quarter of the company's total prescription drug revenue and 12% of its total revenue across all business segments. J&J's current product lineup includes four cancer drugs that made at least $1 billion for the year.

Prostate cancer treatment Zytiga has been J&J's top-selling cancer drug. However, sales for the drug are declining as it faces generic rivals. The company also has a newer prostate cancer drug, Erleada, for which sales continue to climb.

Johnson & Johnson co-markets Imbruvica with AbbVie. The drug is approved for several types of cancer, including chronic lymphocytic leukemia (CLL) and mantle cell lymphoma (MCL). Market researcher EvaluatePharma projects that Imbruvica will be the No. 5 best-selling drug in the world by 2024, with annual sales of $9.5 billion. But the cancer therapy delivering the most impressive sales growth for J&J is multiple myeloma drug Darzalex, which could achieve peak annual sales topping $8 billion.

Pfizer made $7.2 billion from its cancer drugs in 2018. In addition, the company made a little over $1 billion from its smoking cessation product Chantix. These products combined contributed more than 15% of Pfizer's total revenue for the year.

The company's top performer in its oncology franchise is Ibrance. Sales for the breast cancer drug continue to grow and should get a boost if it wins approval as an adjuvant therapy in helping prevent the recurrence of cancer. Sales are declining, however, for Sutent, a chemotherapy used in treating several types of cancer including kidney cancer, as newer rival drugs are taking away market share.

Pfizer's prostate cancer drug Xtandi could become the next blockbuster in its oncology lineup. The company also has several new products on the market, including lung cancer drug Lorbrena and breast cancer drug Talzenna. In addition, Pfizer's acquisition of Array BioPharma brings colorectal cancer drugs Braftovi and Mektovi into its oncology franchise.

Roche is a major player in fighting cancer in a couple of ways. The company's diagnostics segment markets next-generation sequencing (NGS) systems used in cancer research and is researching liquid biopsies for detecting cancer. But Roche's biggest contribution is with its cancer drugs, which combined generated more than $26 billion in 2018.

Roche's late-stage pipeline is loaded with promising programs. The company is evaluating already approved drugs including Kadcyla and Tecentriq in treating additional types of cancer. Roche also has new drugs in late-stage testing, including entrectinib, idasanutlin, and ipatasertib.

Keytruda is by far the top-selling drug for Merck. It's also on track to become the biggest blockbuster drug in the world within the next few years. EvaluatePharma projects that Keytruda's sales will more than double to reach $17 billion by 2024.

A major key to achieving that lofty sales level will be for Keytruda to win approvals for treating additional types of cancer. The drug has won more than 20 U.S. Food and Drug Administration (FDA) approvals so far. Merck is evaluating Keytruda as a monotherapy or in combination with one or more other drugs in clinical studies for treating at least 10 other types of cancer.

Merck also teamed up with Japanese drugmaker Eisai on Lenvima, which is approved by the FDA for treating kidney, liver, and thyroid cancers. The company co-markets Lynparza with AstraZeneca. Lynparza is approved for treating breast and ovarian cancers.

However, Novartis has a near-blockbuster with Jakavi. The company's breast cancer drug Kisqali and immunotherapy Kymriah are picking up momentum. Novartis also has 20 cancer programs in either late-stage clinical testing or awaiting regulatory approval.

You might not think of Abbott Labs as a cancer-fighting stock. But the healthcare giant's diagnostics segment markets products that are instrumental in detecting cancer, including its Alinity, Architect, and Cell-Dyn core laboratory systems.

Although Abbott doesn't report specific sales figures for these systems, its overall core laboratory systems revenue totaled nearly $4.4 billion in 2018. This represented more than 13% of the company's total revenue for the year.

The Alinity family of instruments is a primary growth driver for Abbott's core laboratory systems business. These systems can be used to detect multiple diseases using blood samples, including cancer and infectious diseases.

The company's specialty diagnostics business generated $3.7 billion in revenue in 2018. This segment includes Thermo Fisher's anatomical pathology offerings that are used in cancer diagnosis. However, the company doesn't provide specific revenue numbers for these products.

Thermo Fisher Scientific's life sciences business made nearly $6.3 billion in 2018. This segment's results include sales of NGS systems used in cancer research, although not at a granular level to know just how much of the company's revenue stems from these systems.

Amgen became tremendously successful through the years primarily through its bone disease and immunology products. But the big biotech is also a leader in cancer drugs.

In 2018, around 38% of Amgen's total revenue stemmed from drugs used in treating cancer. This includes Amgen's second-best-selling drug, Neulasta, which is used to promote the production of white blood cells in patients after they receive chemotherapy. The total also includes Xgeva, which can be used to treat bone cancer and bone problems in patients who have cancer, along with up-and-coming cancer drugs Kyprolis and Blincyto.

Amgen's early-stage pipeline could significantly expand the company's presence in the cancer treatment market. The biotech has 18 oncology candidates in phase 1 clinical testing. In addition, Amgen has a biosimilar (a drug that's clinically similar to an approved drug made from living organisms) in development that could eventually compete against blockbuster cancer drug Rituxan.

AstraZeneca's cancer franchise raked in more than $6 billion in 2018. The company's top star was lung cancer drug Tagrisso, with sales of nearly $1.9 billion, followed by breast cancer drug Faslodex, with sales of a little over $1 billion.

Two of AstraZeneca's cancer drugs appear to be on track to become blockbusters: Lynparza and Imfinzi. AstraZeneca and Merck co-market Lynparza, while the company markets Imfinzi on its own. Imfinzi is currently approved for treating non-small cell lung cancer and previously treated advanced bladder cancer.

AstraZeneca's late-stage pipeline includes 17 candidates targeting cancer. Over half of these programs feature Imfinzi in combination with one or more other drugs. The company also has a couple of promising new cancer drugs, savolitinib and selumetinib.

Cancer drugs generated nearly $3.6 billion for Eli Lilly in 2018, accounting for around 15% of the company's total revenue. Lilly's biggest winner is Alimta, which first won FDA approval back in 2004 for treating mesothelioma. The drug subsequently gained approvals for treating non-small cell lung cancer.

Lilly isn't picking up a lot of momentum with its cancer franchise, though. Sales for Cyramza are growing but not at an impressive rate. Sales are falling for Erbitux, which, like Alimta, first won FDA approval in 2004. The main bright spot is breast cancer drug Verzenio, which continues to experience strong sales growth after winning FDA approval in 2017.

There are only three cancer programs in Lilly's late-stage pipeline. Two of them are pursuing additional indications for already approved drugs Cyramza and Verzenio. The one new late-stage candidate, pegilodecakin, targets treatment of pancreatic cancer. Lilly picked up the drug through its $1.6 billion acquisition of ARMO Biosciences in 2018.

Risks for these cancer-fighting stocks

Each of the 10 biggest cancer-fighting stocks operates in a highly regulated environment. The eight companies on the list that primarily focus on cancer drugs must conduct extensive clinical testing of their pipeline candidates before seeking regulatory approval. It's a similar story for the two companies that primarily focus on diagnostic systems. A major clinical setback could cause any of these stocks to fall.

This is especially a risk for drugmakers. Only around 5% of cancer drugs that begin clinical testing go on to win FDA approval, according to the Biotechnology Innovation Organization (BIO).

Even if clinical testing goes well, it's never a slam dunk for a new product to win regulatory approval. Nearly 18% of cancer drugs that make it all the way through late-stage clinical studies fail to win FDA approval.

Assuming a product sails through clinical testing and wins regulatory approval, it then faces the risk of flopping commercially. Competition is often fierce, particularly for drugs that treat relatively common types of cancer like breast cancer and lung cancer.

Cancer drugs that perform well in the marketplace can even be withdrawn if issues arise later. This happened in 2019 when Eli Lilly announced that it was yanking soft tissue sarcoma drug Lartruvo from global markets after the drug flopped in a confirmatory clinical study following its approval.

Companies also could be subject to litigation if patients experience complications while using their cancer-fighting products. For example, French drugmaker Sanofi is being sued over allegations that its breast cancer drug Taxotere caused permanent hair loss.

There's also a risk that major changes to the U.S. healthcare system could cause problems for the top 10 cancer-fighting stocks. Many of these companies make the majority of their revenue in the U.S. If measures were introduced to limit the ability of companies to price their cancer drugs, it could cause the stocks to fall.

Why invest in cancer-fighting stocks?

Despite these risks, the potential exists for solid returns from many of the top 10 cancer-fighting stocks. Aging populations across the world will almost certainly increase the number of patients diagnosed with cancer over the next few decades. This will create a tremendous opportunity for companies that develop products that are highly effective at diagnosing and treating cancer.

Remember, though, that the war on cancer isn't just limited to the largest companies. Over 700 companies are developing late-stage cancer immunotherapies, according to a report from the IQVIA Institute for Human Data Science. Many of these companies are publicly traded. There are plenty of alternatives for investors looking to buy cancer-fighting stocks.