Thanks to a remarkable operating result and some one-time benefits, CVR Refining (NYSE:CVRR) was able to post its first quarterly profit in a while. For investors in this stock, that would typically mean a payday because management distributes all available cash at the end of each quarter. That wasn't the case this time around, though.

On the company's most recent conference call, CEO Jack Lipinski went into some detail as to why management elected to go against the grain and hang onto all the cash it can right now. Here are some of the most important quotes from the call that explain that decision as well as help investors better understand the broader refining market today. 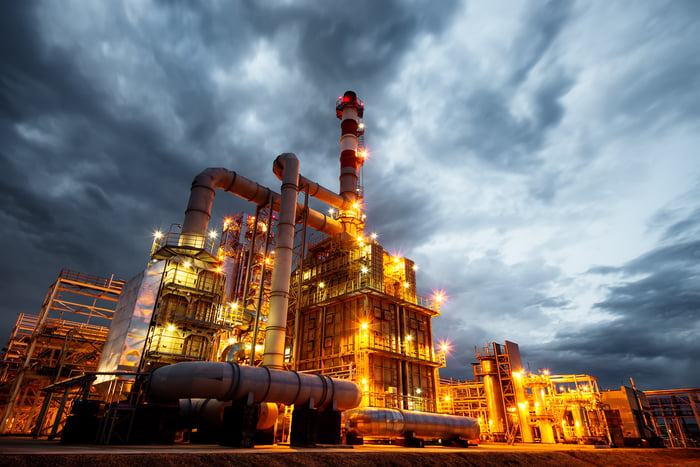 Same as it ever was

Investors have been begging for some signs that the market for refiners would start to improve soon. U.S.-based refiners have been in the doldrums since the fourth quarter of 2015, and stock prices for independent refiners that don't export a lot of product have suffered mightily since then.

According to Lipinski, though, the market hasn't improved much since then. In fact, he thinks we're pretty much in the same place as we were more than a year ago:

On our last earnings call, I commented that U.S. product inventories were looking to be a repeat of 2016. Interestingly, if you look at the data year over year, gasoline, as of the last EIA report, was at the very same level it was a year ago, and distillate is down around 7 million barrels. What's a little troubling, though, is it had dropped in the last two weeks. We've seen it both -- a build in both of these products. And at these product inventory levels, we are at the high end of the five-year range. The change since the end of the year was distillate has dropped about 11 million barrels and gasoline built conversely about 6 [million]. So inventories continue to be high.

And what we find a little bit troubling is that refinery runs that are at our almost all-time highs for this period. We're seeing refinery throughputs over 17 million barrels a day, which is about 95% of utilization. So even though we see exports increasing the amount of U.S. refining, processing has increased to more than offset that. But we are seeing good demand. That's the good side of it. And so maybe what I said will come to pass is that '17 will look an awful a lot like '16. 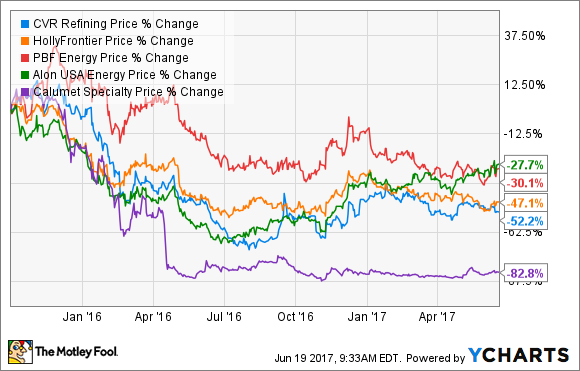 CVR Refining is typically a variable rate master limited partnership, which means it dispenses all available cash at the end of each quarter to its investors. For the past year, though, management has said it is preserving cash as it anticipates some higher-than-usual costs. When asked about this on the call, Lipinski added some color about where CVR was having the problem and why it was preserving cash:

That is the isomerization unit at Coffeyville. During a routine -- during our routine inspection activities, we found some anomalies, and it was prudent to shut down the unit and replace that equipment, some of which is long-lead equipment. And if you take a look at our capital expenditures, Susan indicated that some of our capital expenditures have increased, and actually, the isom[erization unit] is probably the major reason why we did that. We refuse to operate equipment with the -- compromise in any way, shape or form and hurt our employees or our reliability.

Lipinski continued later on that management likes to keep one year's worth of operating expenses in cash anyways, and the volatile markets lately give even more incentive to keep the balance sheet well supplied with cash.

Other reasons for keeping cash around?

[W]e will not be using our cash for any major acquisitions. We have other ways of doing that. We have an ABL. We have an apparent revolver, we -- $250 million revolver with CVR Energy (NYSE:CVI). So major acquisitions will not be done that way. It's just a very difficult time to predict where margins are going to go, where crude differentials are going, where environmental cost will finally shake out. And we just felt it prudent to hold on to that. I mean, if you just simply take a look at -- over a three-week period, we've watched margins drop like $2.50. That's enormous. And so at some point, do I think it's going to stay there? Absolutely, no. I mean, things always correct.

M&A on the horizon?

As you might have guessed, an unprompted mention of M&A from management is always going to get analysts interested. Here's Lipinski's response when asked if the company has any acquisitions on the horizon:

[T]here's nothing that obviously perks up. We are still very interested in growing our logistics business. The Velocity [Midstream) deal was one part of it. We continue to grow our gathering. We are now picking up crude in the Permian at higher and higher levels. And we expect to significantly grow our gathering business this year. And we'll be looking -- we're -- again, we kind of put it on hold for a while. But at some point here, we think it'll be time to spin out CVR logistics. And we're just waiting for the right point, get to right level of distributable cash and see some semblance of order in the refining business, which will give us a runway to do that, and we think that's a lot of value. As far as other opportunities out there, I'm sure you -- everybody's talking to everybody, but I don't see anything happening right now.

There is quite a bit to unpack here. First, a possible spinoff of CVR's logistics business? Refineries spinning off their logistics assets into separate master limited partnerships has been a typical move lately. The question for CVR, though, is what does it accomplish? If the company wants to monetize its logistics assets through an IPO, where will it deploy that cash? This is something worth keeping track of in coming quarters.

Another thing to consider that will make any refining acquisition challenging from here on out is that CVR Refining is one of the smallest fish in the pond now. There has been a slew of deals in the refining industry over the past couple of years that has led to quite a bit of consolidation. As a result, CVR is one of the smallest publicly traded refiners out there. So unless there are some individual refineries that companies want to unload, then CVR is more likely to be the acquiree instead of the acquirer.

The changing market for refiners

If CVR's size weren't enough of a detriment for making an acquisition, the mere fact that the market dynamics for refining have changed drastically also hinders that chance at any deal. As Lipinski pointed out, new production sources and more transportation options make it harder to foresee where the market is going:

[T]he change in the crude markets is making it more difficult to look at M&A. I mean, a few years ago, you would love to have a northern refinery where you could've accessed Bakken at significant discounts. Today, Bakken is no longer that discounted. And as a matter of fact, it's getting pricey. We believe the Permian Basin -- the Delaware and Permian basins are going to be phenomenal producers, and we also believe the same thing in Oklahoma with -- our refinery in Wynnewood is literally sending out a pool of oil. So we think those areas will give us benefit. You have to look, when you do M&A, what is long-term play? What is going to happen? I mean, the guys on the East Coast no longer really have any economic access to Bakken, and yet they spent I don't know how many tens or hundreds of millions of dollars building [railyard]. So you have to have a longer view.

We have already seen a significant refining investment get upended by these changing dynamics. Calumet Specialty Products Partners (NASDAQ:CLMT) tried to build a diesel-only refinery that would serve the North Dakota region. At the time, the economics made a ton of sense: Crude there was much cheaper than in other parts of the nation and diesel to fuel the shale boom was expensive. Unfortunately, that investment thesis blew up when drilling activity ground to a halt and more takeaway capacity narrowed the price spread for Bakken crude.

The oil and gas market in the U.S. is still very much in flux, and until we get a clearer picture of how all this shakes out, it will be hard for anyone to make an investment with a clear view of the future.