There may be a lot of fish in the sea, but wild fish stocks are still a finite resource that needs to be properly managed. In fact, global catch volumes from wild fisheries have remained virtually unchanged since 1988. Civilization has only been able to meet growing demand for fish and seafood by turning to aquaculture, which has accounted for all 60 million-plus tons of production growth in the past three decades.

There's just one problem: Fish raised through aquaculture need to be fed fish oil (Omega-3 fatty acids) and fish meal (protein), which are both traditionally produced from wild fish stocks -- and the world is struggling to keep up. Then again, every problem in food security can also be viewed as an opportunity. These 10 low-key companies are choosing to view the situation through the more optimistic lens and changing aquaculture in the process. 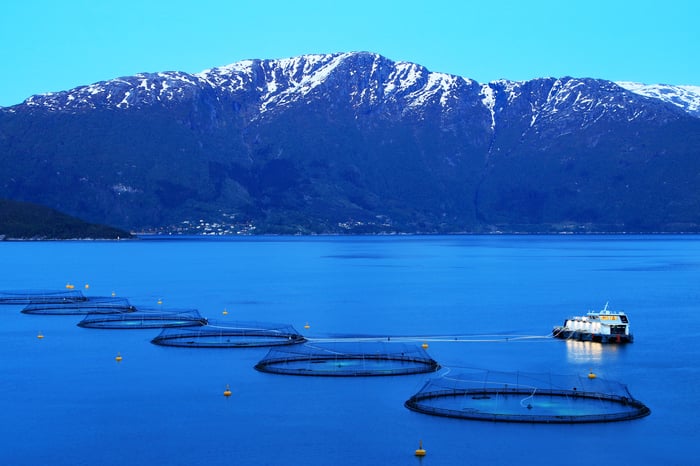 The future of fish and animal feed?

Traditionally, a sizable amount of fish protein and all Omega-3 fatty acid fish oils are ultimately sourced from leftover aquaculture byproducts and wild menhaden catch, which are processed into feed pellets and fish oil products. (Menhaden is a type of fish.) The latter industry is heavily regulated, with catch volumes set for specific years, which has forced feed producers to get creative with their supply chains over the years. However, a fish-eat-fish world can only be sustainable for so long.

That's why these companies are looking to protein and Omega-3 sources that aren't connected to fisheries and aquaculture.

All five partnerships are gearing up to have commercial-scale production of protein, Omega-3 fatty acids, or both online by the end of the decade. Each is launching with a slightly different approach.

For instance, TerraVia and Bunge are offering their AlgaPrime branded DHA ingredient to aquaculture stakeholders throughout the world through a distribution agreement with BioMar, which is the leading fish-feed logistics company. They've also announced that several leading salmon farmers have agreed to adopt the product.

TerraVia and Bunge initially built a 100,000 MT per year facility in Brazil to target food and industrial chemicals, but the pivot to fish feed has helped them be among the first to make moves in the market. The joint venture between the two is expected to generate $25 million to $30 million in revenue this year -- if production issues or bankruptcy for the former don't get in the way.

Archer Daniels Midland and Synthetic Genomics are the only other team on the list that has production available today. That's because they're able to utilize existing fermentation assets from Archer Daniels Midland (which were formerly leased to TerraVia) as well as the giant's global distribution network. 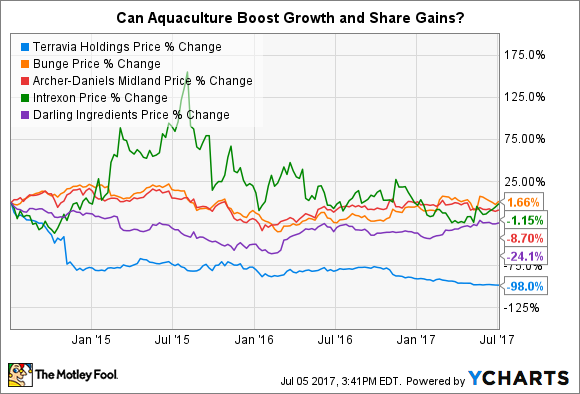 Meanwhile, Intrexon and Darling Ingredients are taking a totally different approach. Rather than replacing Omega-3 fatty acids traditionally sourced from fish oils with algae oils, the pair are taking aim at replacing fish meal with insect protein. The technology platform, which grows commercial quantities of black soldier fly larvae and processes them into protein pellets, will be deployed in a modular production process that should be relatively easy to scale.

Both companies will provide funding, while Darling Ingredients also brings invaluable experience with commercial production processes and a leading distribution network for natural ingredients. Production is expected to begin by 2018 and grow over time. It will provide a critical early source of product revenue for Intrexon, which desperately needs to diversify its top line. 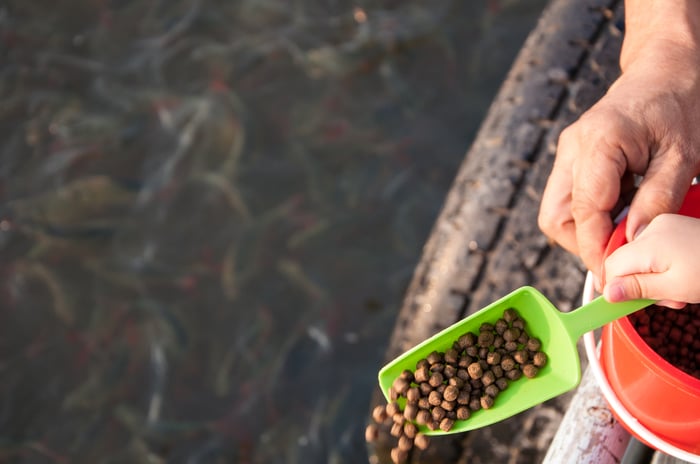 The remaining two partnerships are eyeing massive production facilities and taking unique approaches as well. Cargill and Calysta will feed methane in cheap American natural gas to grow algae biomass rich in protein (really). Their facility in Tennessee will be built in two phases, with the first phase due to come online in 2019. One small problem: Their product is approved in Europe, but not yet the United States.

DSM, already the leading producer of algae oils for food and feed ingredients, has partnered with Evonik to offer the industry's first fish oil product that contains both DHA and EPA Omega-3 fatty acids. If combined with a meal product, then the ingredient could supply all three ingredients. Their production facility, slated to come online in 2019, will provide 15% of global fish oil needs at full tilt.

The market opportunity for supplying nutrients to the aquaculture market is large and ripe for the taking -- and these 10 low-key companies aren't sleeping on it. In fact, all of the products mentioned here could be used as ingredients for the fish feed, animal feed, and even pet food markets. The total opportunity is over $60 billion per year. If you want a piece of the action, then take a closer look at these innovative partnerships.