From June 2014 to January 2016, Brent crude futures would fall from over $113 to almost $26 per barrel; a 77% drop that played havoc with private companies and entire nations counting on oil revenues.

Fast-forward to today, and oil has surged more than 200% from the 2016 low and hit $80 per barrel this week. The companies that survived the downturn now emphasize profitable production after the "drill, baby, drill" years that brought on the downturn.

Will oil prices surge back to $100? It's no sure thing, but it may be more likely than many realize. Underinvestment in the oil patch has resulted in the weakest new oil discoveries in decades, and exploration & production spending has been very slow to recover as oil companies focus on profits. According to the International Energy Agency, oil and gas spending budgets were only increased about 6% in 2018, after multiple years of huge budget cuts.

Add it all up, and the combination of steadily increasing demand and years of weak investments in the oil patch could result in triple-digit oil prices once again. 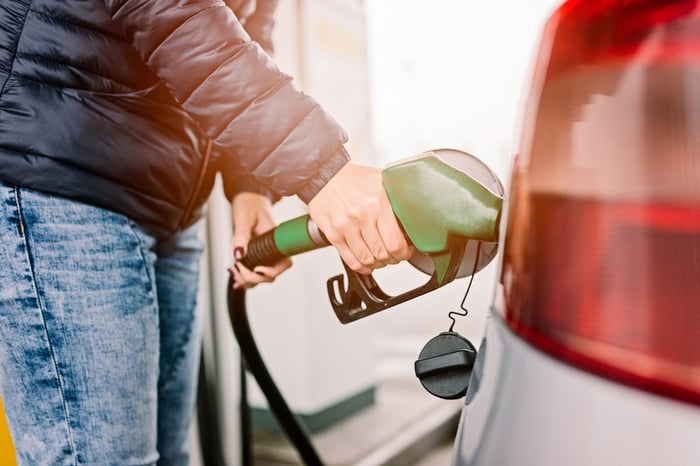 You'll feel $100 oil at the pump, but you can also use it to boost your portfolio. Image source: Getty Images.

Why Total and Shell are ideal for the upside, while offering protection on the downside

Since oil prices peaked in 2014, both Total and Shell have managed to generate positive total returns for investors who held through the downturn, in large part because of their diverse operations. Neither has come close to outperforming the S&P 500, but it could have been far worse; one only has to look at some of the biggest independent oil producers, including Apache Corporation (NASDAQ:APA) (down 53%), Anadarko Petroleum Corporation (NYSE:APC) (down 33%), and Continental Resources, Inc. (NYSE:CLR) (down 12.3%) to appreciate the benefit of Total's and Shell's more diversified operations.

Combine that downside protection with the profit-boosting power of higher oil prices from their production units, and you'll see why both are attractive.

Last quarter, Shell's earnings surged 52% to $5.9 billion, with its upstream segment delivering $1.9 billion of that amount. Total reported a 58% surge in exploration and production segment profits. Here's the really interesting bit: Both companies delivered these big profit increases while realizing barely over $60 per barrel.  Total and Shell may be the best-positioned oil majors to profit from higher oil prices in the next few years, even if we don't see $100 over that period.

The best risk-reward play in oil

Trading for about half the tangible book value of its assets, offshore drilling contractor Transocean could very well be an incredible bargain, particularly if crude prices continue to climb. This is because few offshore drillers have the same combination of a high-specification fleet, strong liquidity, and a solid backlog. At the end of the first quarter, Transocean had over $3.3 billion in cash and investments, $12.5 billion in contracted backlog, and has produced positive operating cash flows every quarter through the downturn.

But there are some risks: It has $1.9 billion in debt due in the next year, and the offshore market remains oversupplied with drillships. But with a solid operating record in recent years and more than enough cash to cover its near-term debt, Transocean should be able to continue riding out the choppy seas offshore. And if oil prices do continue climbing, offshore investments would be certain to increase. Few companies would be as well-positioned as Transocean to profit.

During the oil downturn, many people expected Clean Energy Fuels to struggle mightily. And if you look only at its stock price, one might assume that's been the case. Since the 2014 oil peak, Clean Energy shares have fallen a painful 78%. But at the same time, the company has increased the volume of fuel it sells by 33% while cutting operating expenses by 21% and debt by almost 60%. Today's Clean Energy is well-positioned to turn growth into profits and is compelling enough for Total to buy a 25% stake in the company.

It may not directly benefit from $100 oil, but there's little doubt that higher oil prices would pave the way for growth, particularly as heavy-duty vehicles like tractor-trailers, buses, and garbage trucks feel the pain of higher prices at the pump. Diesel is up 66% in the past 15 months, while the "at the pump" price of natural gas has hardly changed. If we see $100 oil, natural gas could be as much as $2 per gallon cheaper than diesel in some places, worth thousands of dollars per year in savings -- per vehicle -- for many fleet operators.

With the biggest network of natural gas refueling stations in North America, Clean Energy is set to win a lot of new customers making the switch from diesel to natural gas if oil prices continue to march higher.