Recent tests show lasers are a viable weapon for defense against drones -- but are they a viable revenue stream for Raytheon?

All across the military-industrial complex, lasers are gaining popularity as weapons systems that could one day protect U.S. forces from rockets and missiles, and destroy hostile aircraft and drones at a distance. But just how effective are lasers in engaging moving aerial targets? 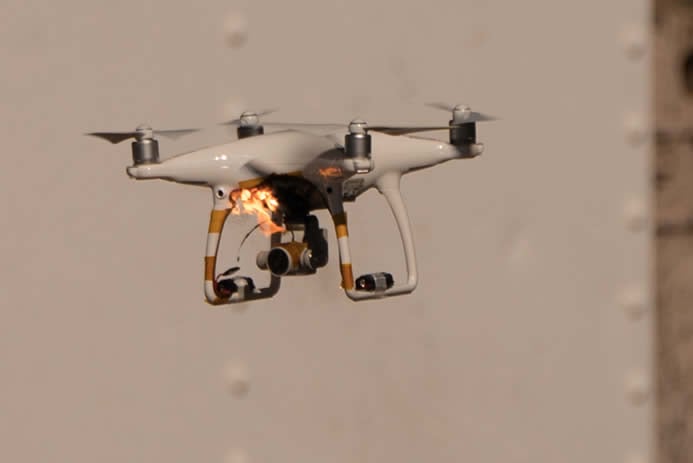 If you want an answer to that question, check out this latest video from Raytheon Company (RTN) showing the company's newest high-energy laser (HEL) shooting down small unmanned aerial vehicles in a series of tests.

In 2014, the Navy hired Raytheon to build a "high power," "light-weight," and "rugged" laser cannon small enough to be mounted on a small ground vehicle but powerful enough to knock UAVs out of the sky. Raytheon calls the end result its "Laser Dune Buggy" -- actually, a Polaris-built MRZR all-terrain vehicle with a Raytheon laser cannon taking up most of its trunk space. If you're wondering why the Navy would be interested in something with wheels, it's because the Pentagon runs funding for the Marine Corps through the Department of the Navy. (Raytheon also says, by the way, that the Army is interested in this project as well.)

In multiple tests, Raytheon's laser -- believed to be capable of 25 kilowatts of throughput -- locks on to and engages small quadcopter drones similar in style to commercial drones built by DJI. In the space of what looks like 10 seconds in one instance but only two or three in other tests, an infrared video shows the drone glowing hotter and hotter, then suddenly keeling over and careening to the ground.

It's not entirely clear what the laser is doing to the drone, whether it's disrupting its guidance or burning through its engine or rotors. What is clear is that in just seconds this rather modest-sized laser (Lockheed is working on one with half a megawatt of throughput, or roughly 20 times more power) is capable of engaging and destroying a drone in flight, in one case at a range of 145 meters.

Admittedly, 145 meters isn't a huge range for Raytheon's laser -- only about one-and-a-half times the length of a football field. And there's a big difference between building a laser that can shoot down a toy drone and building one that can incapacitate a Scud missile, an attacking fighter jet, or a Predator-size combat drone.

It's going to take time to scale up current technology to tackle those larger targets, but Raytheon's laser already has its uses. More and more often, small commercial UAVs jury-rigged to drop hand grenades are being used in asymmetrical warfare against American troops. As Raytheon explains, you can shoot down these drones with existing anti-air defenses, such as Patriot missiles. But Patriots cost more than $3 million each, while a DJI drone costs less than $1,000, meaning, as Raytheon puts it, the "cost-to-kill ratio is high."

In contrast, small, high-energy anti-aircraft laser weapons such as the one Raytheon has built cost as little as "a dollar a shot," and offer a much more economical way to take care of such aerial pests. Raytheon notes that a single charge to its HEL is sufficient to power 20 to 30 shots. So not only is the system cheaper than a traditional projectile-based anti-aircraft system, you can also fit a whole lot more "shots" in the 30-square-foot footprint of the HEL system than you could fit missiles in an equivalent space.

Raytheon says that, when coupled with a generator and a secure fuel source, its weapons offer "virtually infinite magazine depth" -- a capability, I might add, that suggests no lessening in the weapons' endurance as it scales up in power. (Infinite ammo is infinite ammo, no matter how powerful the charge.)

Even at this early stage, most researchers agree that the market for military lasers is growing healthily -- perhaps as much as 8% annually through 2020, by which time it might be worth $4.6 billion. That's impressive for a weapons system that's only been employed in a very few isolated instances outside of testing ranges so far. It's difficult to say for certain if these estimates are accurate, although given how many laser contracts we've seen awarded by the U.S. (and non-U.S.) militaries in recent years, I'd say there's at least some basis for optimism.

One thing seems certain: The market should be a whole lot bigger for a company like Raytheon, which can build lasers sized to fit onto a Jeep, than it will be for companies focusing on monster laser cannons that require ocean-going destroyers to carry them. (To give you a sense of the scale, the Army has 120,000 Humvees in service; the Navy has fewer than 300 warships.)

Miniaturization is thus going to be key for this market. For that matter, even more powerful lasers will benefit from miniaturization, as it will permit their use aboard aircraft, multiple emplacements aboard warships, and so on. Fortunately, most of the laser companies named above, Raytheon included, have vehicle-sized lasers in the works.

It's similarly too early to say which company will ultimately emerge as the winner in military lasers -- or even if there will be only one winner, for there could be several, just as the Pentagon currently has several manufacturers of different kinds of missiles, of bombs, and even of different calibers of bullets. The important thing is that, as Raytheon's most recent test demonstrated, lasers are showing utility even at power levels much lower than what the Pentagon will eventually be aiming for (i.e., throughput in the half-megawatt to megawatt range).

As progress continues, I think lasers will develop into a significant sales opportunity for the companies that can make them, and Raytheon is smart to be working to take the lead in this market.

Why Aerospace Stocks Are Rallying Today
415%