In the years following the Great Recession, Ford Motor Company (NYSE:F) was the only bright spot among Detroit automakers. It had trudged through the recession without government assistance, unlike its Detroit rivals, thanks to $23.6 billion in loans former CEO Alan Mulally brilliantly secured to help finance a turnaround and protect from an unexpected event. Management developed a "One Ford" plan that would refresh its vehicle designs, shrink its number of vehicle platforms, and later reinstate its dividend ahead of rival General Motors, as well as double down on its China growth efforts – everything was going well.

But Ford's stock has been hammered in 2018 with a lack of a clear plan, plunging China sales, and a stock that's shed 22% of its value this year alone – but is this an opportunity to buy, or time to panic?

One major gut punch to Ford investors this year came during the second-quarter earnings report which showed results in its Asia-Pacific region deteriorated. Wholesales in the region declined 26% during the second quarter, compared to the prior year, which drove nearly all financial metrics lower. Revenue tumbled 30% from $3.4 billion to $2.3 billion and last year's $167 million EBIT profit flipped to a tragic $394 million loss during the second quarter. The driving force behind those brutal results was poor performance in China, where consumers have been turned off by Ford's aging vehicle portfolio, especially the Focus and Escort. In fact, Ford's equity income from its Chinese joint ventures declined a staggering $192 million, or 98%, barely breaking even. 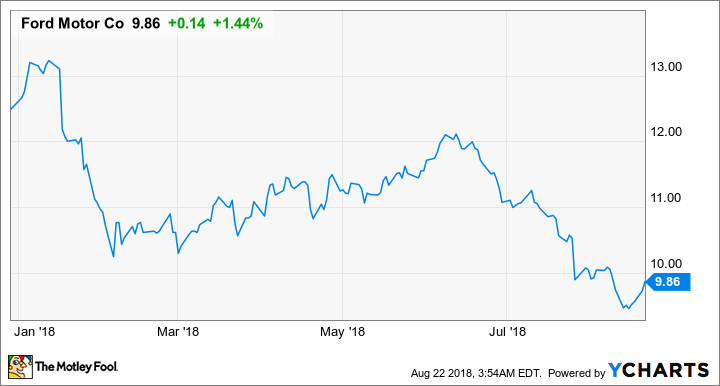 Ford's rough second quarter driven by woes in its Asia-Pacific region, as well as Europe, forced management to reduce adjusted earnings guidance to a range of $1.30 to $1.50 per share for full-year 2018, down from the prior guidance of $1.45 to $1.70 per share. With reduced guidance, CFO Bob Shanks noted that rising costs and tariff hits would make a larger impact later in 2018, and with plateauing sales in the U.S. new-vehicle market, Ford's stock recently dropped below $10 for the first time since 2012. That could make Ford a buy if you believe the following.

Ford is attractive if...

First, you must believe its dividend is as safe as management says. With Ford's stock price decline, it trades at a paltry price-to-earnings ratio of seven times, which has sent its dividend yield to a very enticing 6.13%. Debates have flared up whether Ford should cut its dividend, but if management did cut the dividend it would be a major backtrack from Ford stating it could maintain its dividend throughout the cyclical industry's downturns. The good news: At the end of the second quarter, Ford had a cash pile of $25.2 billion, which it could dip into to protect its dividend and still fund growth strategies.

Second, you must believe Ford can execute its turnaround plan in China. With Chinese consumers brushing aside Ford's dated vehicles, the automaker plans to launch 50 new models in China by 2025 to provide a much-needed portfolio refresh. China is already the world's largest automotive market, but its demand for more profitable SUVs is growing and due to pollution problems it will remain at the forefront for electrified vehicle development and sales growth. Ford's China 2025 Plan will include eight all-new SUVs and 15 all-new electrified vehicles from Ford and Lincoln to help target those needs. Management predicts its strategic plan in China will drive a 50% increase in the region's revenue over the same time period.

Third, you have to buy into Ford's long-term driverless car and smart mobility potential. 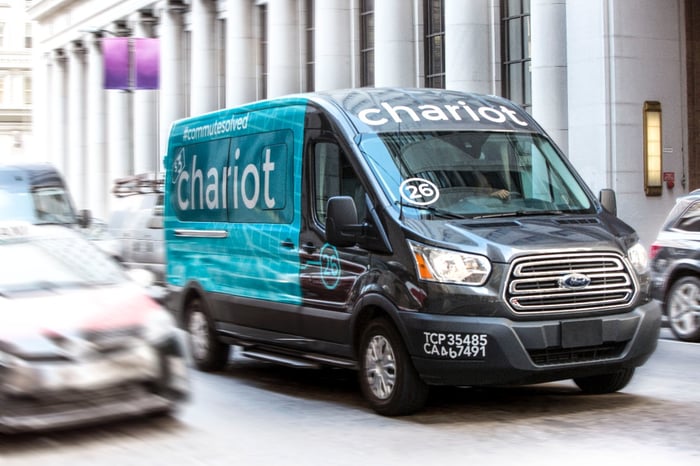 As driverless cars go from science fiction to mainstream, Intel predicts it will create a $7 trillion annual economic opportunity by 2050, and automakers that monetize that opportunity will thrive. Ford has a handful of smart mobility projects going, including Chariot, a ride sharing service helping commuters pool with up to 14 passengers in a Ford van, and GoRide, a service for non-emergency medical transport to help serve consumers lacking transportation from their home to medical appointments. Ford also plans to build a fully autonomous vehicle at scale by 2021, albeit a couple of years behind cross-town rival General Motors.

Ford faces challenges, no doubt, but if you believe it can turn the business around in China with new vehicles, maintain its dividend as it claims, and execute on its driverless vehicle and smart mobility ambitions, at a price-to-earnings ratio of seven times and a dividend yield of 6.13%, Ford could be a steal for long-term investors who can handle the ups and downs. To be fair, that's a lot of ifs, and for investors to feel confident in buying Ford shares long-term, management has work to do creating real credibility with its driverless vehicle ambitions – as its crosstown rival has. Until that happens, don't be sold on Ford.