When you hear the phrase "stock index," what comes to mind? Most investors think of a headline-grabbing index like the Dow Jones Industrial Average. Or they might know that the S&P 500 is widely considered to be the benchmark index for stock-market performance.

However, the Dow and S&P 500 are just two of many different stock-market indices. You can get a different perspective on the market by looking at some of their lesser-known counterparts. For example, while the Dow and S&P 500 had an incredibly strong year in 2017, indices focused on smaller stocks didn't do quite as well.

With that in mind, here's a quick guide to nine stock market indices that could help improve your understanding of how the stock market is performing. 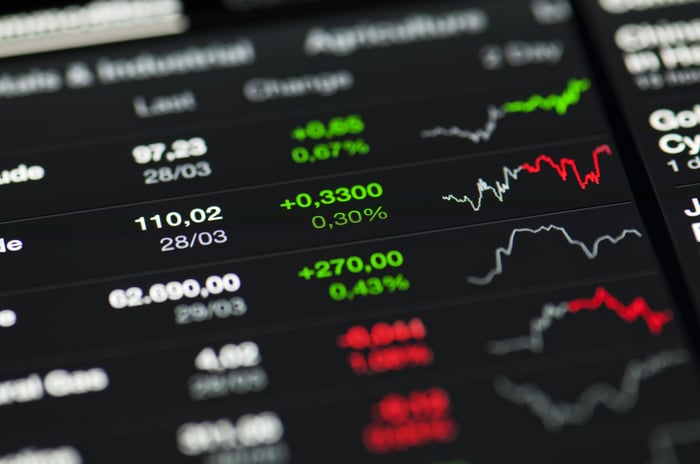 The Dow Jones Industrial Average, or "the Dow," is the most well-known stock market index, and is often quoted as a barometer of market performance. For example, when the Dow crosses a major milestone (like 25,000) for the first time, it often appears in financial news headlines.

Despite the amount of attention it gets, the Dow is not a great representation of the overall stock market. For one thing, it only contains 30 companies -- and not just the largest ones. Despite being among the five largest publicly traded U.S. companies, Amazon and Alphabet are not Dow components.

Plus, the Dow is a price-weighted index, meaning that stocks with a higher share price count more. This is in sharp contrast with most other indices, which are market-cap-weighted, meaning that larger companies (appropriately) have more influence on the index.

The takeaway: The Dow is a "headline" index -- not a great indication of how the overall stock market is doing.

Because of the Dow's flaws, the S&P 500 is widely considered to be a better representation of how the stock market is doing. Not only does it contain far more companies -- 500 -- but the S&P 500 is also a market-cap-weighted index.

The S&P 500 is a large-cap index, meaning that it contains the largest U.S. companies and excludes smaller and midsize companies. As we'll see in a bit, smaller companies often move differently than larger ones. However, the S&P 500 represents about 80% of total U.S. stock market capitalization, so it is a pretty good indicator of how most stocks are doing.

Often simply referred to as the Nasdaq, the Nasdaq Composite index is composed of all of the common stocks traded on the Nasdaq exchange. There are over 3,000 stocks contained in the index, which is weighted by market capitalization.

Unlike many other U.S. stock indices, the Nasdaq Composite contains stocks of companies that aren't headquartered in the U.S. It's also a tech-heavy index, with nearly half of the index (by weighting) composed of tech-sector stocks.

Also an index of Nasdaq-listed stocks, the Nasdaq 100 is a narrower index focused on the largest 100 (roughly the top 3%) of stocks listed on the exchange; it specifically excludes financial companies. This index is a good way to track the performance of large-cap stocks, with a particular emphasis on technology.

Consisting of 2,000 small-cap companies, the Russell 2000 index is widely regarded as the best benchmark of how smaller U.S. companies are doing. The average stock in the Russell 2000 has a market cap of about $2.3 billion, but the median market cap is just $933 million (meaning that half are smaller).

Generally speaking, small-cap stocks tend to be more volatile than their large-cap counterparts, but they also tend to outperform larger stocks over the long run. And, over shorter time periods, small caps can perform quite differently than large-cap stocks. So far in 2018, the Russell 2000 has outperformed the S&P 500 by about 3.6%, but it underperformed the large-cap benchmark by more than 6% in 2017.

If you're looking for a "total stock market" index, the Russell 3000 is it. The index is a combination of the Russell 2000, just mentioned, and the Russell 1000, which contains the largest 1,000 stocks in the market.

The idea behind the Russell 3000, and funds that track it, is that it provides exposure to the entire U.S. stock market -- not only the largest companies and not just the relatively volatile small-cap segment.

The S&P 500 can be divided into two groups: value and growth. We'll get to growth stocks next, but the S&P 500 Value Index consists of the stocks in the S&P 500 that are considered to have "value characteristics." These are generally stocks that trade for relatively low multiples of their book values and earnings, and tend to be more mature, slower-growing companies.

As of the latest available data, some of the largest stocks in the S&P 500 Value Index include JPMorgan Chase, Berkshire Hathaway, AT&T, and ExxonMobil.

The portion of the S&P 500 that is considered to have "growth characteristics" makes up the S&P 500 Growth Index. While there are no specific cutoffs to distinguish growth stocks, they are generally (but not always) companies with above-average sales growth, and trade for relatively high price-to-earnings ratios.

To give you an idea, some of the largest stocks in the S&P 500 Growth Index are Apple, Amazon, Facebook, Visa, and Boeing.

Technically, the S&P 500 is a part of a total-market index known as the S&P 1500. (I didn't include it on this list because the Russell 3000 is an excellent total-market index, and is more widely used.) The S&P 1500 is made up of three parts; the widely used S&P 500 is the large-cap portion. The S&P SmallCap 600 is the small-cap component, although the Russell 2000 is a much more widely used index. In the middle is the S&P MidCap 400 index, which tracks the middle of the market; as of this writing, eligibility is restricted to stocks with market caps between $1.6 billion and $6.8 billion.

From an investors' perspective, mid-cap stocks are often seen as a nice compromise between lower volatility and high long-term return potential.

Make sure you're following the entire market

The point is that by adding a variety of indices to your market-watching strategy, you can get a better idea of what's going on. Is the current rally being led by growth or value stocks? The S&P 500 recently touched an all-time high, but how are small companies doing as a whole? These are questions you can't answer if you're only looking at the Dow and the S&P 500.

The Dow Jones, S&P 500, and 7 Other Stock Market Indices -- and What They Mean @themotleyfool #stocks Next Article
Current