Shares of British American Tobacco PLC (NYSE:BTI) were sliding last month on ongoing concerns in the sector. The parent of brands like Dunhill and Lucky Strike took a hit as chief rival Philip Morris International (NYSE:PM) was downgraded, falling in tandem.

According to S&P Global Market Intelligence, the stock gave up 11% in August. 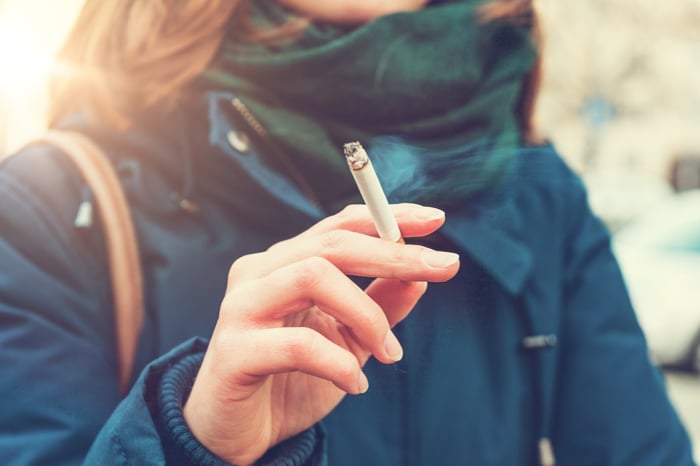 As the chart below shows, it tracked with Philip Morris during the slide toward the end of the month: 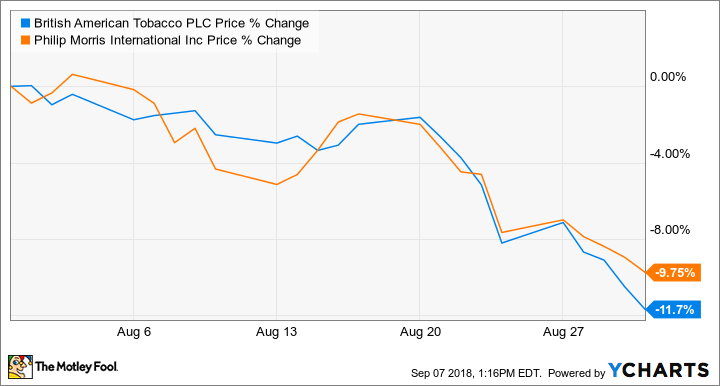 Shares of Philip Morris took a spill on Aug. 24, falling 3.2% as the international distributor of Marlboro got downgraded by Jefferies. The research firm lowered its rating on the tobacco giant from buy to hold, and lowered its price target from $93 to $80; it based the move on the company losing share in the heated tobacco market, which includes vaporizers and the heat-not-burn product iQOS.

The downgrade seemed to weigh on British American Tobacco (BAT) as well: Its shares were also down 3.2%, as the market feels it's subject to the same headwinds as Philip Morris. British American stock continued sliding from there over the rest of the month.

Earlier in August, Philip Morris sued BAT, alleging that its Glo tobacco-heating device infringes on two of its patents. BAT said it would challenge the patents in court.

Demand for such tobacco-heating devices seems to be slowing faster than expected; shares of Philip Morris were crushed earlier this year when that company revealed a slowdown in growth in the key Japanese market.

Meanwhile, JUUL Labs appears to be winning the fast-growing e-cigarette market, with 68% share in the U.S., dwarfing second-place BAT at 12%. JUUL now has its sights set on the international market, seeking funding for a massive expansion, which could pose a significant threat to both BAT and Philip Morris.

It's been a rough year for British American Tobacco and the other tobacco giants, as concerns have mounted about their ability to transition to next-generation products while cigarette sales slowly decline.

BAT shares are now down 29% year to date, a significant pullback for the usually reliable tobacco stock.

Still, the company is growing its bottom line. In June it projected "good" full-year growth in earnings per share at constant currency. While BAT is clearly facing challenges, profit growth should eventually put a floor on the stock, considering how far it's fallen already this year.