Please ensure Javascript is enabled for purposes of website accessibility
Free Article Join Over 1 Million Premium Members And Get More In-Depth Stock Guidance and Research
By Rich Smith - Sep 16, 2018 at 9:13AM

If satellites are built in space, what will that mean for investors on Earth?

Earlier this year, space market-research firm StratSpace produced a report noting global industry plans to put more than 1,100 satellites into orbit this year. But StratSpace expects only about 40% of that total to actually make it into orbit. That would be a bit ahead of the historical average of 25% of planned missions actually taking off, but still a discouraging statistic.

Part of this gap between what industry would like to put into orbit, and what it actually succeeds in putting into orbit, StratSpace says, is explained by problems with technical execution, failures at launch, or weather delays. Constraints involving launch schedules and traffic concerns downrange (wayward planes and boats getting in the way) also make launchers' lives difficult, according to StratSpace.

But what if there were a way to avoid all these problems with launching satellites into orbit? What if satellites could be built while already in orbit? 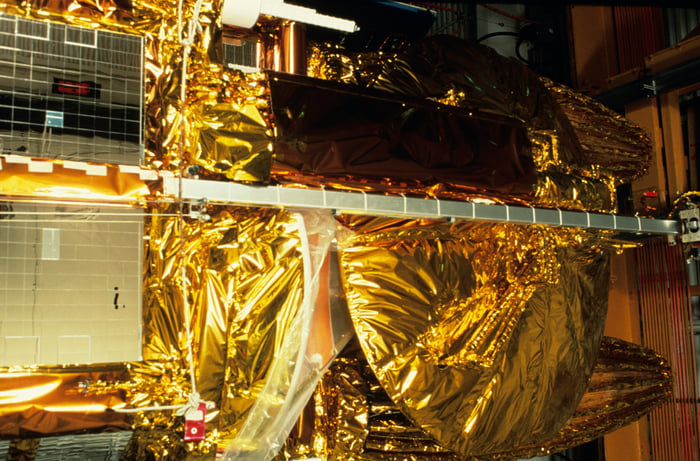 A satellite takes up a lot of room in a rocket, and its skin looks rather delicate. But what if it could be built in space, and never had to fit aboard a rocket? Image source: Getty Images.

Last month, NASA began exploring that idea when it awarded Maxar Technologies ( MAXR 0.22% ) a contract to study the use of commercial habitats in space to build satellites. Maxar, which has roots in Canada, recently moved its headquarters to Colorado after acquiring U.S. space assets including SSL and DigitalGlobe.

As Maxar explained in a press release, building satellites in orbit might be one way to get around the "constraints of launch vehicle volumes and schedules."

Of course, you still need to get the materials up there in the first place, to build the satellites with. But as a general rule, solid lumps of raw material aren't as delicate as fully refined manufactured electronics and other satellite parts, and can therefore better withstand the g-forces of a space launch. You can also fit more raw materials into a space capsule, because they can be densely packed (like spools of filament used in orbital 3D printers). Fully built satellites of equivalent mass would be bulkier.

It's even possible that satellites can one day be built in space without the need to send up any raw materials. In his lunar adventure novel Artemis, for example, author Andy Weir (most famous for sending Matt Damon to Mars in The Martian) posits an entire lunar economy largely built upon the discovery of aluminum deposits, which could be smelted and used to build a city on the moon.

Farther out (both literally and chronologically), it may be possible to mine space resources outside of Earth's gravity well -- both on the moon and on asteroids -- and to refine those into raw materials to manufacture satellites and other spacecraft.

Can the science fiction concept of smelting aluminum on the moon turn into a science fact of satellites being manufactured in Earth orbit? That's what Maxar subsidiary SSL (formerly Space Systems/Loral) will try to find out for NASA. And the answer could be of the highest importance for all space industry investors -- not just Maxar's.

With Maxar's valuation now down to just 22 times earnings, and with an enterprise value only about 23 times its annual free cash flow, I happen to think its stock is finally starting to look attractive in its own right.

That being said, NASA's research and development contract with Maxar is apparently so small that it didn't meet the standards for "materiality" requiring Maxar to disclose its value in its press release. So this isn't a contract that will move the needle for Maxar by itself.

Rather, I think space investors should look even further out when weighing the importance of this research. If space manufacturing turns out to be viable, what companies are most likely to benefit?

Space-mining companies like Planetary Resources and Moon Express are two likely candidates, as they'd probably be providing the raw materials that would be manufactured into satellites, spacecraft, and even space habitats. Made in Space, a manufacturer of 3D printers that operate in zero gravity, is another one to watch.

Unless you think NASA would be comfortable attaching a nuclear reactor to the International Space Station (ISS) to generate the energy needed to power a furnace for smelting metal, 3D printing seems to me the safest form of manufacturing in space at this time. And Made in Space's Additive Manufacturing Facility has been successfully using 3D printing to make parts for the ISS on the space station itself for two years now.

Made in Space recently won a phase II contract to deliver to ISS an Archinaut, which the company describes as an "in-space robotic manufacturing and assembly platform capable of constructing space-optimized systems of sizes not previously feasible," as well as a Vulcan "hybrid metal manufacturing system."

Primary Resources, Moon Express, and Made in Space -- unlike Maxar -- are not publicly traded, and aren't available for investment by individuals. But that doesn't mean they won't have an IPO at some point in the future, or be bought out by a company that already is public. If and when either of those things happens, you want to pay attention to the right companies and recognize the opportunity when it presents itself.