Shares of a number of the top precious-metals producers jumped higher on Friday as investors flocked to safe-haven assets, causing a spike in the price of gold and silver. The metals producers followed the commodity higher, with shares of companies including DRDGold (NYSE:DRD), Yamana Gold (NYSE:AUY), Iamgold (NYSE:IAG), Silvercorp Metals (TSX:SVM), and Americas Silver Corp (NYSEMKT:USAS) all climbing more than 8% on a day when the S&P 500 lost 2.59%.

Friday was a miserable day for equity markets, as stocks plunged in response to a fresh escalation in trade rhetoric and tariff threats between the U.S. and China. Before markets opened, China's Finance Ministry said it would be imposing tariffs on another $75 billion worth of U.S. goods, which it views as a retaliation to U.S. tariffs set to take effect Sept. 1. President Donald Trump responded on Twitter by calling on U.S. companies to "immediately start looking for an alternative" to doing business in China.

....all deliveries of Fentanyl from China (or anywhere else!). Fentanyl kills 100,000 Americans a year. President Xi said this would stop-it didn't. Our Economy, because of our gains in the last 2 1/2 years, is MUCH larger than that of China. We will keep it that way! 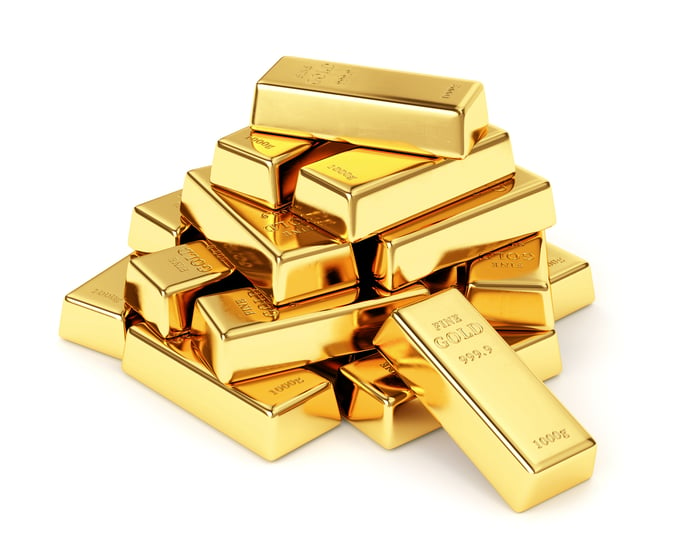 It would have likely been a good day for precious-metal prices even without the equity sell-off. In a speech at Jackson Hole, Wyoming on Friday morning, Federal Reserve Chairman Jerome Powell said he would do whatever was necessary to keep the economy rolling. That implies the sort of loose monetary policy that typically leads to higher gold prices. Add in currency-related fears due to Brexit, China's standoff with Hong Kong, and general weakness in Europe, and it can be concluded that global trends are favorable to metals.

Mining can be a difficult business even in the best of times, and it's important to note that there are lots of ways other than buying miners to gain exposure to gold markets. But on a day when few stocks were trading up, the miners offered a rare bit of green for the portfolio.

The move in gold prices comes at a time when many in the market were anticipating an increase. Analysts at Goldman Sachs earlier this month hiked their gold-price forecast for the first time this year due to trade tensions and low interest rates, establishing a six-month projection of $1,600 per ounce. That implies there could still be room for the producers to run higher, even after impressive gains on Friday.

It's hard to predict what will come next in the trade battles, and harder still to predict where gold and silver will go from here. For those worried about a recession, it might be tempting to gain exposure to gold in some form instead of remaining in equities. But given how volatile the market has been and some of the weak margins among the miners, investors should be very cautious if considering following the momentum into precious-metal producers in the days to come.