As fears mount that a U.S. recession is looming, a lot of investors are looking for safe haven assets in which to park their money. And "everybody knows" that gold is about the safest thing you can be invested in when a downturn hits and stocks are falling.

But is it? The answer is less clear-cut than it once was.

However, people who prefer to invest in companies that do something rather than in bullion that just sits there may wonder: Do gold stocks offer the same kind of safety during a recession that actual gold supposedly offers? What about gold streaming companies like Royal Gold (NASDAQ:RGLD), Franco-Nevada (TSX:FNV), and Wheaton Precious Metals (NYSE:WPM)? Let's look at the record to see if those streamers -- and gold stocks in general -- are actually safe bets during recessions. 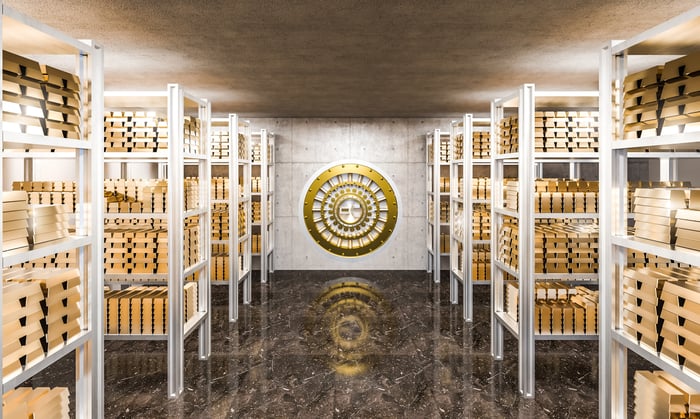 Luckily, we can easily examine data from past recessions to see if gold was a good investment during those times of economic turmoil.

The Great Recession officially began in December 2007 and officially ended in June 2009. But the nature of recessions is such that you don't know one has officially begun until you're already in the midst of it. However, looking at just the official period of the recession -- start to finish -- we see that gold (as well as SPDR Gold Shares, another way to own the precious metal without keeping gold bullion outright) indeed handily outperformed the S&P 500: 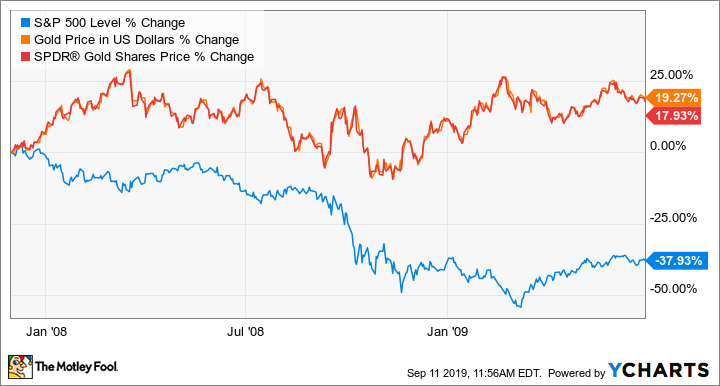 But let's say you waited to convert all your stocks into gold or gold shares until you knew that there was a recession on. One big catalyst that made everyone realize that something was seriously amiss was the collapse of Lehman Brothers over the weekend of Sept. 13 and 14, 2008. If you had pulled your money out of stocks and put it into gold on the very next trading day -- Monday, Sept. 15 -- here's how you would have fared vs. the market: 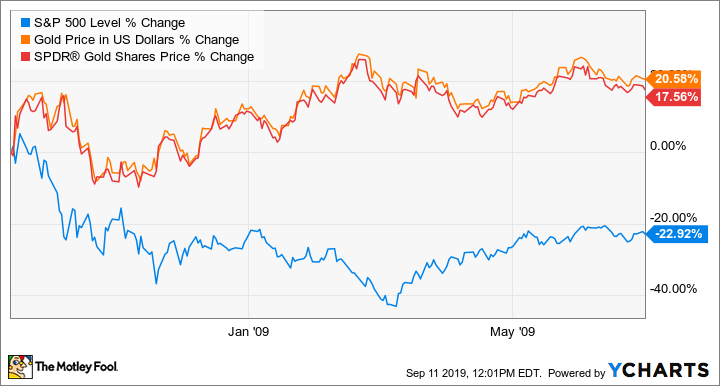 As you can see, gold prices did fall, but their drop wasn't as severe as the stock market's, and they recovered much more quickly. During the previous "dot-com bubble" recession of March-November 2001, gold also held onto much of its value. (SPDR gold shares weren't around yet at that point.) 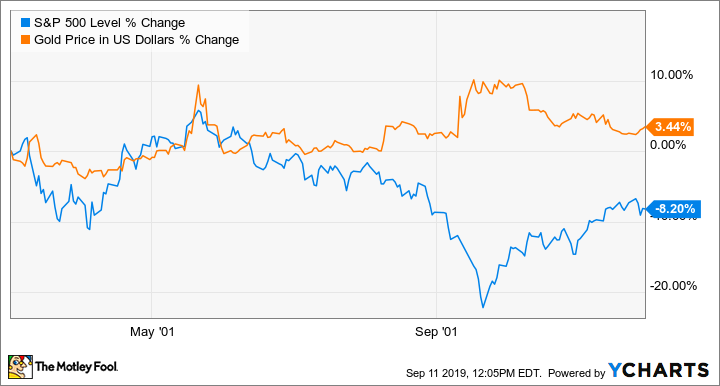 This was also true for previous recessions. What's worth noting here is that although gold clearly maintains its value better than stocks during a recession, you'd have to have excellent timing to be able to recognize the recession for what it was and convert all your assets before everyone else did the same.

In the chart above, if you'd waited until September to convert your stocks to gold, you probably would have been worse off than if you'd done nothing. Your stocks would have already lost part of their value, and you would have missed out on a significant portion of gold's gains. Not to mention that if you failed to switch out of gold soon enough after the recession ended, you would have missed out on a large piece of the rebounding stock market's gains. Attempting to time the market is tricky, and I don't recommend it.

Still, if gold holds its value during a recession, how do gold mining stocks measure up? The answer: Inconsistently. Take a look at this chart showing how gold miners like Newmont Goldcorp (NYSE:NEM) and Barrick Gold (NYSE:GOLD) fared during the 1990-1991 recession: 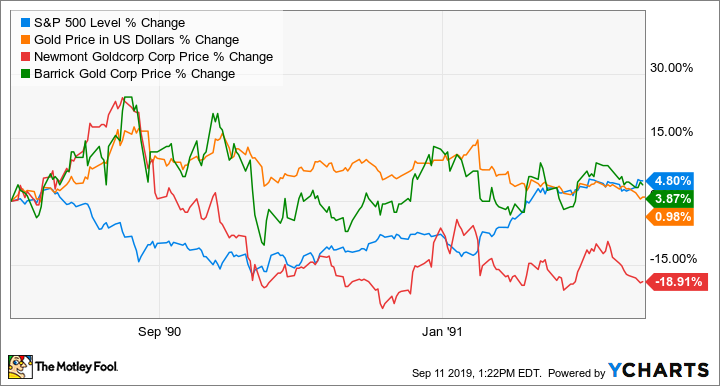 After spiking in tandem with a run-up in gold prices, shares of both miners fell. In the end, Barrick outperformed gold by a little and Newmont underperformed it by a lot. During the 2001 recession, though, it was Barrick that outperformed gold while Newmont lagged (although both beat the overall market): 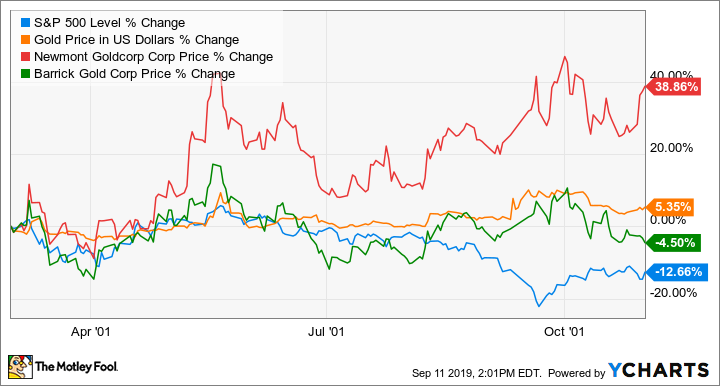 Getting into the stream

So if mining stocks aren't as "recession-proof" as gold itself, what about gold streamers? Streaming companies provide upfront capital to miners so that they can open new mines, in exchange for the right to purchase -- at a discounted rate -- a percentage of the precious metals those mines eventually produce.

There's not actually that much data on whether gold streamers outperform during a recession, since most gold streaming companies weren't around yet during the 1991 or 2001 recessions. Of the three largest gold streamers listed on the New York Stock Exchange, only Royal Gold was around for both of those downturns, and in 1991 it was just a penny stock, making its 75% loss during the recession understandable. During the 2001 recession, its shares soared 88.4%, far outpacing both gold and the overall stock market.

Canadian streamer Franco-Nevada wasn't listed on the NYSE until 2011, and during the Great Recession, Wheaton Precious Metals was called Silver Wheaton and was focused on silver as opposed to gold, so it's not a good comparison. Shares of Royal Gold, though, jumped 45%, more than twice the gains of the price of gold. Franco-Nevada also performed well on the Toronto Stock Exchange during the period.

Here's what we do know about the performance of gold streamers over the last decade: When the price of gold goes up, the share prices of gold streamers tend to immediately jump as well. When gold prices drop, shares of streaming companies also drop. The exact sizes of those drops and jumps aren't directly correlated with each other, but in general, gold price moves have outsize effects on those stocks.

Unfortunately, based on the limited data we have available, it's not clear whether gold streaming stocks will make good safe havens during a recession. On the one hand, gold miners don't seem to be particularly safe investments during recessions -- at least, not as safe as actual gold. On the other hand, Royal Gold and Franco-Nevada both outperformed bullion during the past two recessions.

Certainly, gold prices tend to go up modestly during recessions, and because gold prices seem to directly affect the prices of gold streaming stocks, there's reason to think that they may be good bets to outperform, if not gold, then at least the broader market.

However, the price of gold -- and the prices of streaming stocks -- have already begun to rise. Gold is up 19.1% so far this year, while shares of the three streaming stocks have increased by more than 30%, likely thanks to all the recession jitters in the market. That may mean that the big gains this time around have already occurred.