Please ensure Javascript is enabled for purposes of website accessibility
Log In Help Join The Motley Fool
Free Article Join Over 1 Million Premium Members And Get More In-Depth Stock Guidance and Research
By Lee Samaha - Oct 20, 2019 at 7:53AM

How the company's upcoming strategic review could affect investors holding the stock for its payout.

There's little doubt that Emerson Electric (EMR 1.46%) is a dividend investors' favorite. The company has increased its payout every year since 1956 and currently sports a 3.1% yield that's well covered by earnings and cash flow.

But the company recently announced its board will conduct a comprehensive review of its "operational, capital allocation, and portfolio initiatives" in order to enhance shareholder value. Let's look at what this could mean for investors.

Emerson Electric is heading for a change

According to Reuters, hedge fund D.E. Shaw is building a position in Emerson Electric with a view to pressuring the company to make structural changes, including a potential breakup. There's no shortage of industrial companies breaking up in order to better concentrate on their core markets or offer more-focused investments. 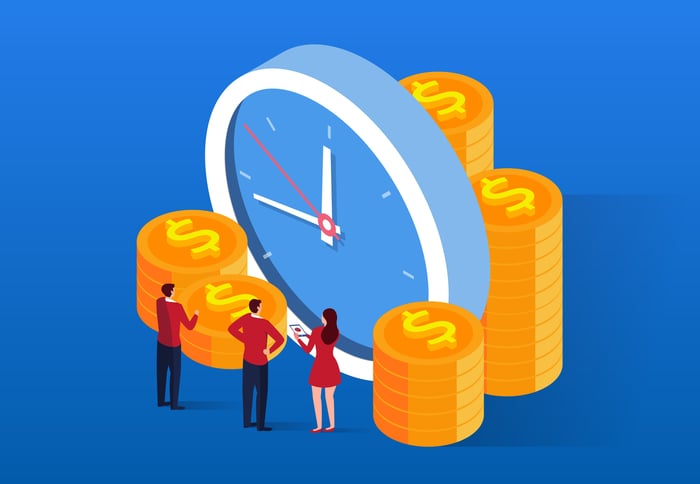 In this context, Emerson's eclectic mix of businesses is a viable candidate for a breakup. The automation solutions segment is a leader in process automation, and its commercial & residential solutions businesses sell heating and cooling products, tools, and products for the home, among other offerings. But even if CEO David Farr and the board decide to split up the company, there's reason for investors to feel confident that they won't see a reduction in the overall dividend.

First, Emerson Electric's current dividend is well covered by earnings and free cash flow (FCF) -- something that gives management a significant amount of leverage. As you can see in the chart below, only around 54% of FCF was paid in dividends in 2018. 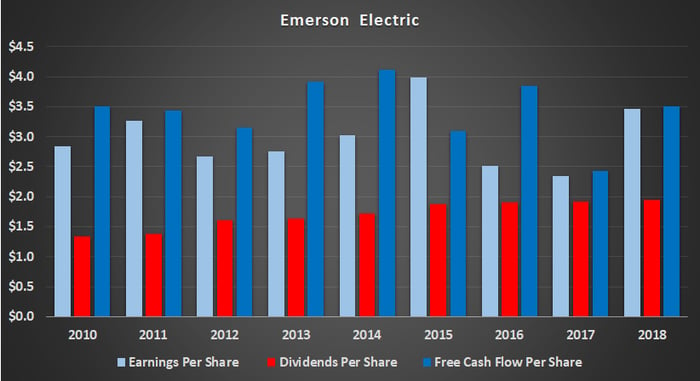 The second reason is that Emerson's two businesses tend to generate similar amounts of profit, and have similar growth prospects, so any potential split is likely to lead to both companies having the capability and financial profile to continue to pay dividends to shareholders.

In other words, if a split occurs, it won't lead to two companies with drastically different profiles -- say a fast growth company not paying a dividend and a low growth cash cow type business paying a stable dividend -- and this means the dividend from the combined companies is likely to be similar to the existing Emerson Electric dividend. 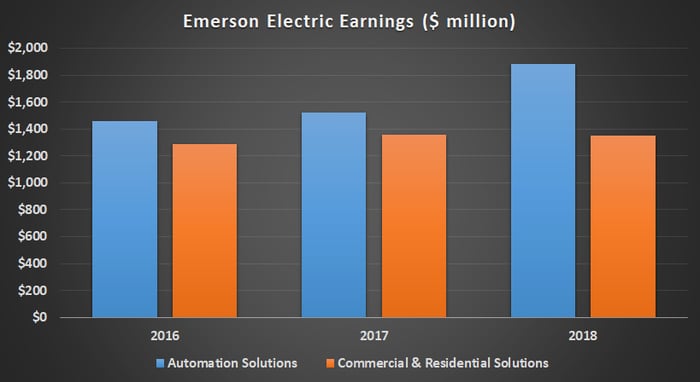 The third reason is management's historical commitment to being dividend-investor friendly. Aside from raising its payout for more than 60 years, the company has defended its dividend policy recently. As you can see in the first chart above, FCF dipped in 2017 after Farr sold the network power business for $4 billion in November 2016 and then its power generation, motors, and drives businesses in January 2017.

Some commentators questioned whether Emerson would maintain the dividend, and Farr's response to such speculation can only be described as robust. There's little doubt that he, and the board, understand the importance of the dividend to investors, and so the company maintains a goal of paying out 45% to 50% of its FCF in dividends.

Why a breakup could make sense

As to whether the review could lead to significant action or not, there's a strong argument to suggest it will. The two Emerson businesses don't have much in common, and each operates in end markets that are undergoing significant changes. The heating, ventilation, and air conditioning (HVAC) market is widely believed to be ripe for consolidation with Johnson Controls, Ingersoll-Rand, and United Technologies all taking corporate action that will result in more-focused HVAC operations.

But the main focus of Emerson's corporate activity in recent years has been its automation solutions, and not least the failed bid to buy Rockwell Automation (ROK -0.39%) in 2017. The deal would have added Emerson's process automation (the management of the continuous flow of fluid materials such as oil & gas and chemicals) with Rockwell's industrial automation operations. That would have created a U.S. champion in a market dominated by European companies like ABB, Schneider Electric, and Siemens. It would also have allowed the new company to co-invest in digitalization of its products -- a key trend for investors in automation and robotics stocks -- while generating cost and growth synergies.

In fact, ABB and Siemens have both been restructuring to focus more on industrial automation and take advantage of the opportunity to add value to their solutions through the Industrial Internet of Things (IIoT).

Given this backdrop, it's likely that splitting up Emerson would give the automation solutions business a better opportunity to look at mergers and acquisitions. And it should be noted that Emerson's proposal for Rockwell involved a commitment to a "strong and growing dividend."

Investors should welcome the review

A breakup of the company could unlock value in a disparate collection of businesses and allow management to reassess potential mergers, acquisitions, and investment opportunities. That's something that investors should welcome whether they seek income or growth.