Lots of investors were puzzled after Tesla (NASDAQ:TSLA) unveiled its Cybertruck on Thursday night. It's apparently not designed to compete directly with the huge-selling, and hugely profitable, full-size pickups from the Detroit Three, but for whom was it designed?

What's the point of a truck that looks like it was taken from the set of a low-budget 1970s dystopian science-fiction film? Sure, Tesla's claims for its performance are impressive, but Tesla is good at performance, and at making impressive claims. And at least some Tesla fans are enamored of the slab-sided stainless beast.

But what is Tesla really hoping to accomplish here? I think CEO Elon Musk has given us a few big hints since the truck's Thursday-night reveal.

Is this all about the preorders?

I noted with interest on Friday that Tesla requires a deposit of just $100 to secure a "preorder" of the Cybertruck. That's a lot less than the $2,500 deposit required to order the company's upcoming Model Y crossover ($2,500) and the $1,000 it required to secure a reservation when the Model 3 sedan was first launched.

Some analysts have speculated that deposits on upcoming models have been important sources of cash flow at certain points in Tesla's history. But the $20 million that Tesla presumably raised through Monday is a trivial sum, a fraction of what Tesla will spend on the development work needed to turn the Cybertruck into a real product. 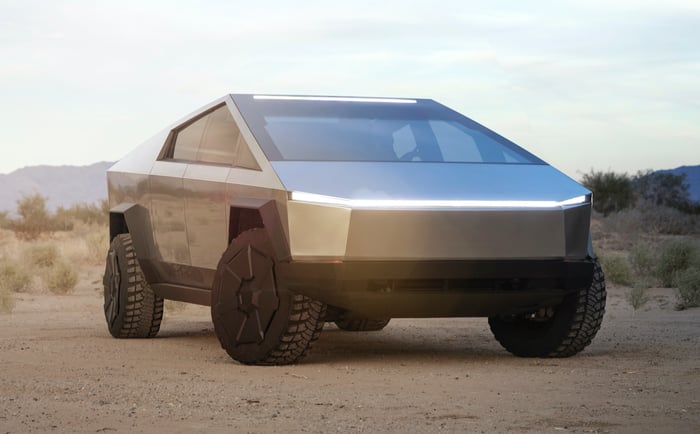 Tesla will need time and money to turn the Cybertruck into a real product -- and to deliver on its other promises. Image source: Tesla.

A thousand dollars or more is enough to give plenty of people pause before ordering, especially the young people who make up a disproportionate share of Tesla's fan base. But $100? Lots of people can come up with $100, especially when it's refundable. In fact, those who most ardently support Tesla's "mission" could probably come up with more than $100 -- enough to "preorder" several Cybertrucks.

What if that's the point? What if Tesla's real goal here, at least in the near term, is to generate a big preorder total -- one that could, for instance, be used to help support a stock offering to raise more cash?

Why Tesla might be looking to raise more cash

I'm hardly the first person to observe that Musk and Tesla often seem to make decisions that are driven by the company's stock price, its cash balance, or both. That's hardly ideal for long-term-minded investors, but so far it hasn't mattered much.

Tesla had $5.3 billion in cash and equivalents as of the end of the third quarter. That seems like a reasonable reserve, but it's probably not enough to fund everything that Tesla has promised to deliver (Model Y, Semi, Roadster 2, factory in China, possible factory in Europe, Cybertruck...) over the next couple of years.

Now, 200,000 preorders isn't a lot for a full-size pickup truck. For context, it's about three months' worth of Ford F-Series sales. But at an average selling price of $50,000, it's about $10 billion in future revenue, if -- and it's a big if -- those preorders convert to actual sales.

That might be enough to convince an investment bank or two that Tesla is finally becoming a sustainable business. If that's the goal, we'll probably know soon.