The new year promises to be an exciting one in the video game industry. New consoles are due to come out ahead of the 2020 holiday season from Sony and Microsoft, and new monetization models for games will start to emerge as more cloud gaming services launch.

The technologies and services emerging this year will set the tone for the next decade in the video game industry. But there are two things investors can bet on with confidence: Mobile game sales will continue to grow faster than console and PC games, and the companies with the most engaging content will prosper.

As we kick off a new decade, here's why investors should consider buying shares of NetEase (NASDAQ:NTES) and Take-Two Interactive (NASDAQ:TTWO). 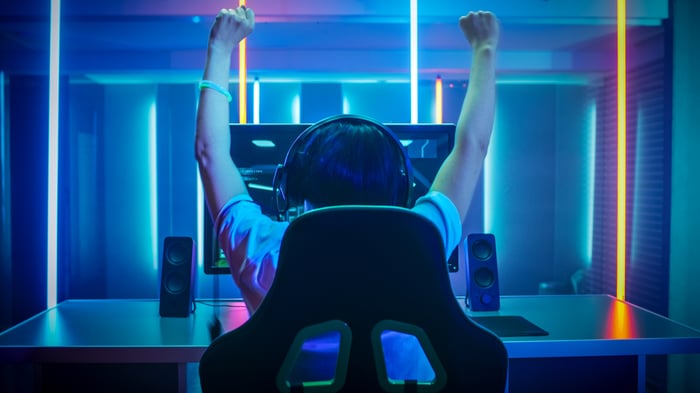 NetEase is a leading internet and online game services provider in China. The stock has tripled over the last five years on the back of strong growth across its business lines, including online games, online education, e-commerce, and advertising. The company's bread-and-butter is gaming, which produces most of its revenue and gross profit. Over the last five years, total revenue and earnings are up 415% and 275%, respectively, but with China's gaming market expected to grow to more than three times its estimated $60 billion value in 2017 over the next decade, NetEase's rise is far from over.

China has the most-engaged and largest base of online gamers in the world. NetEase develops in-house and licenses over 100 mobile games, with notable hits including Fantasy Westward Journey and Westward Journey Online. Also, it's a go-to partner for foreign companies that want to connect with China's burgeoning mobile game market. Since 2008, NetEase has been the distributing partner of Activision Blizzard's top titles in the Middle Kingdom, including World of Warcraft, Diablo, Heroes of the Storm, and Overwatch.

It also has seen tremendous growth from its e-commerce businesses, including the cross-border retail platform Kaola and the Yanxuan marketplace. But these businesses have not generated much profit for the company. In the third quarter, management sold Kaola to Alibaba for $2 billion to focus on better growth opportunities like online games, online education, and its cloud music service Yunfeng, which just received a $700 million investment from Alibaba.

The sale of Kaola signals that management is focused on allocating capital to the best growth opportunities, and those with the clearest path to profitability. While gaming is the main moneymaker right now, other businesses, including NetEase Cloud Music and Yanxuan are showing potential; revenue from these businesses rose nearly 50% between 2016 and 2018. With Alibaba's investment in Yunfeng, NetEase plans to pursue further digital monetization opportunities in music to drive growth.

NetEase is a very profitable business, and it maintains a policy of returning roughly 25% of its quarterly net income to shareholders through dividends. After the sale of Kaola, shareholders received a special dividend of $3.45 per share on top of their regular quarterly dividend of $4.14, representing a yield of about 2.5% based on the current share price of $305. That's a nice payout, but the average yield over the last five years has hovered around 1%.

All in all, the combination of a shareholder-friendly management team and strong growth prospects makes the stock a compelling buy at its forward price-to-earnings ratio of 18.2.

I own shares of all three U.S.-based gaming leaders -- Activision Blizzard, Electronic Arts, and Take-Two Interactive. But I believe Take-Two could outperform its peers over the next 10 years. Past performance is not always the best indicator of future returns, but Take-Two's returns have trounced those of its rivals lately, and there are a few reasons why I think that trend could continue.

For starters, it's growing off a smaller base of revenue than Activision or EA. This means when Take-Two releases a grand slam like Red Dead Redemption 2, which has sold 26.5 million copies over the last year, it has more of an impact on the top line. Revenue is up 76% on a trailing-12-month basis through the fiscal second quarter (which ended in September). With Grand Theft Auto Online and Red Dead Online building massive player bases, Take-Two should see strong digital sales over the next few years from virtual items sold in-game, which should benefit its bottom line. 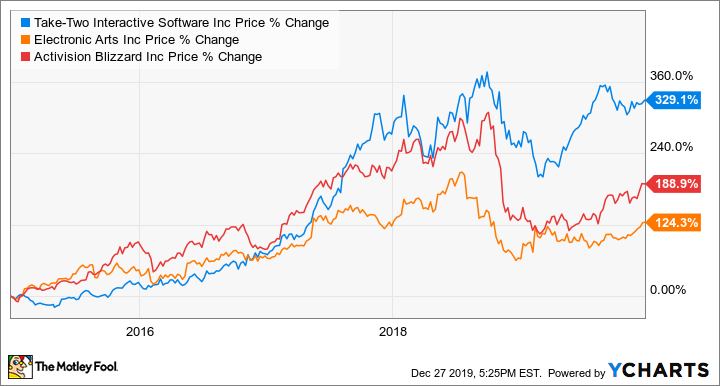 Also, Take-Two is starting to diversify its game roster, gradually building a wider base of revenue like its larger peers. Its relatively new Private Division label released The Outer Worlds in October to rave reviews. Next year, a sci-fi shooter called Disintegration could be a surprise winner, too. The potential for additional hit games from Private Division is an overlooked possible catalyst for Take-Two in the long term. Of course, we're also getting closer to the next Grand Theft Auto title -- and the current installment has sold more than 100 million units since 2013.

Considering all that, as well as the fact that it sports a lower forward price-to-sales (P/S) ratio than its peers, Take-Two stock looks like a compelling buy, in my view. Currently, Activision Blizzard and Electronic Arts sell for more than 6 times sales, whereas Take-Two sells at a P/S ratio of 4.47. All three companies generally trade at similar PE ratios, but as it continues to diversify its business across console, PC, mobile games, and esports, and as management continues to steer it toward consistent profitability like its larger rivals, I believe Take-Two is the better buy among them now.