Please ensure Javascript is enabled for purposes of website accessibility
Log In Help Join The Motley Fool
Free Article Join Over 1 Million Premium Members And Get More In-Depth Stock Guidance and Research
By Daniel Foelber - Feb 24, 2020 at 5:45AM

A clash of two leading aerospace and defense stocks.

Boeing has been riddled with scandal since the groundings of the Boeing 737 MAX in March 2019, whereas TransDigm's high margins continue to impress investors. Looking at 2020 and beyond, both companies are poised to benefit from an expected rise in population and subsequent air travel, but which company is the better overall long-term buy? 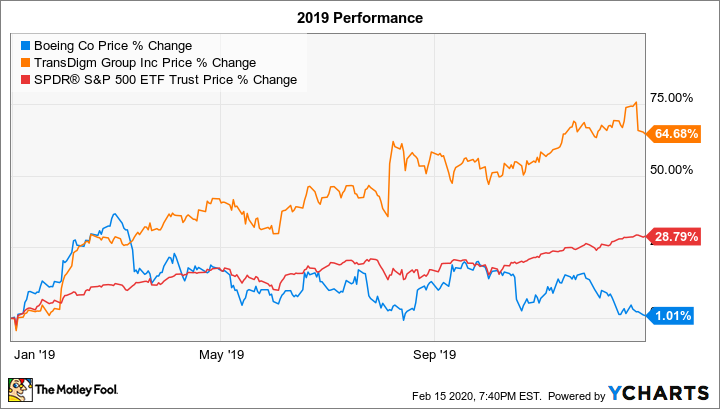 Boeing will have a lot of work to do if it wants to rebuild the trust and reputation it once held as one of the most respected and advanced American industrial and defense stocks. After posting its first annual loss in more than 20 years, Boeing is focused on not just getting the 737 MAX in service, but making it a plane that pilots and passengers trust.

In terms of Boeing's buyers, Southwest Airlines has been by far the most impacted as the airline operates an exclusively Boeing fleet. American Airlines and United Airlines are two other airlines with 737 MAX aircraft in their inventory and more orders on the way. All three airlines plan to hold Boeing accountable for present and future financial damages as a result of the groundings.

To compensate these domestic airlines as well as big buyers overseas, Boeing continues to update its estimated liability. After recording a liability of $2.6 billion in Q4 2019, Boeing's cumulative liability now stands at $8.3 billion net of insurance. Boeing plans to doll out concessions over a few years on a customer by customer basis, which includes American companies and airlines overseas. One dramatic example was an Indian discount airline, SpiceJet Ltd, which posted its highest profit ever in Q2 2019 in the hopes that Boeing would provide concessions for delaying its MAX orders and forcing SpiceJet to rent aircraft or risk canceling flights.

Boeing originally planned to up its production to 57 class 737s per month by late 2020. That forecast looks increasingly unlikely as Boeing's suppliers attempt to stage in production, at the request of Boeing. Spirit AeroSystems (SPR -1.21%), a manufacturer of aerostructures like fuselages, pylons, nacelles, and wing components, reached an agreement with Boeing in late January to begin production slowly in an effort to ship a total of 216 MAX shipsets to Boeing in 2020.According to a press release, Spirit AeroSystems states it "does not expect to achieve a production rate of 52 shipsets per month until late 2022."

The ripple effects of a crisis of this magnitude impact manufacturers, suppliers, airlines, pilots, and the countless passengers who have experienced canceled or rescheduled flights. Adding it all up illustrates a clear perspective of just how bad the 737 MAX saga has been.

For every month that domestic and international regulatory bodies hold the MAX grounded, Boeing suffers heavily. The company is already accounting for a $4 billion abnormal production cost to be "expensed as incurred, primarily in 2020."

Most of the major airlines with exposure to the MAX have delayed flight schedules until June 2020. It's a toss-up if the MAX will be in service by then, but if the airlines can't fly the MAX through yet another peak travel season this year, it could mean blood in the streets in terms of reparations or a possible switch from Boeing to Airbus (EADSY -2.20%) from an airline perspective.

Stepping back from the MAX scandal, high demand and customers waiting with cash in hand have historically been some of the main reasons why Boeing stock is attractive. The power of Boeing's backlog and its borderline duopoly with Airbus make Boeing's business model a dream come true for investors. According to Boeing as of Q4 2019, the company's backlog now includes "5,400 aircraft valued at $377 billion, equating to more than six years of production."

There's no denying that Boeing's predicament is a tough pill to swallow in the near term, especially given fierce competition from Airbus. The 737 MAX has already cost Boeing billions of dollars and will continue to severely affect the company's profitability until the planes can be sold and flown. That said, Boeing is riding the tailwinds of a global rise in air travel, particularly out of developing countries in Southeast Asia and China. As hard as it is to advocate buying Boeing stock now, it may be even harder to argue that the stock won't do well over the long term. 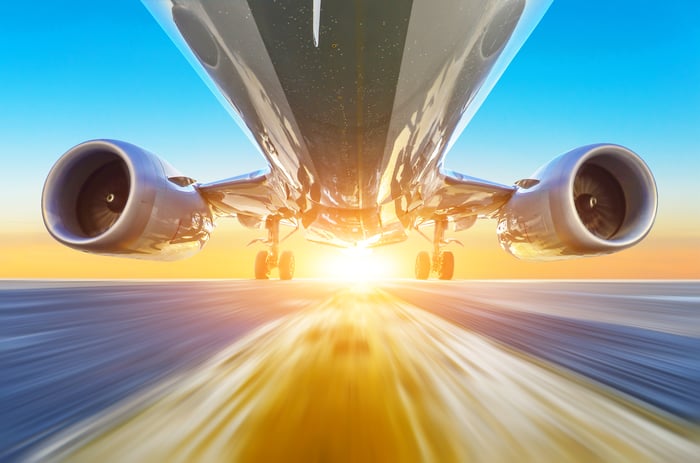 TransDigm has been a rewarding stock, capping off its monstrous decade with a 64% gain in 2019. The company's high margins are a result of its premium service and supply of aftermarket parts for the aerospace and defense industries. 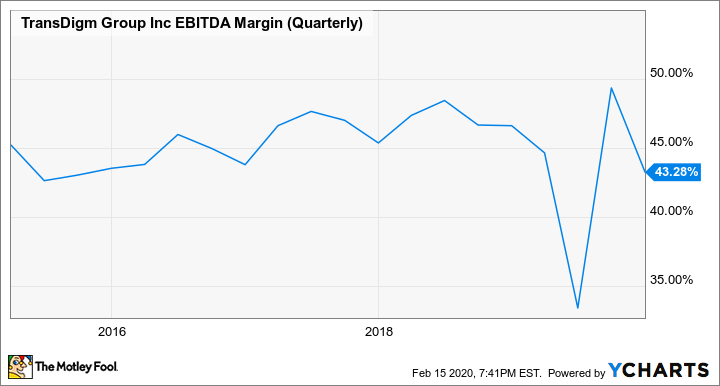 Aftermarket parts are an often-overlooked business model. Boeing's and Airbus' backlogs are impressive in terms of big-ticket revenue, but they also unlock the potential to add to the aftermarket. Commercial aircraft tend to have decades of useful life. On top of that, providing spare parts for planes is loads more complicated and niche than, let's say, the aftermarket support of a passenger sedan. It's a sophisticated market, which is why customers around the world, including Boeing, are happy to work with TransDigm.

TransDigm's ability to quickly provide crucial parts and services to the aerospace industry is a sophisticated and impressive business model that should grow based on the same optimistic forecasts that Boeing is citing in terms of the ongoing industrialization of developing nations and a growing population. 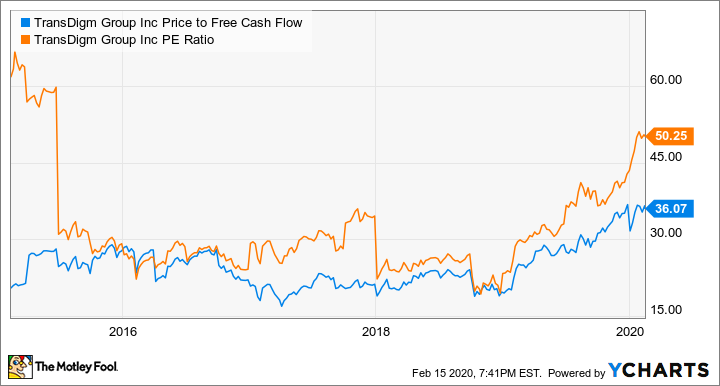 My only concern for TransDigm is its valuation. A high P/E ratio and price to free cash flow (FCF) are simply a result of TransDigm's stock price outpacing its earnings and FCF. That being said, TransDigm's long-term future looks bright. High-margin businesses like TransDigm are justified when a company's business has high barriers to entry. It's not easy for a start-up to compete with TransDigm, just as it's not easy to make an iPhone or produce sophisticated software like Adobe's creative cloud.

Pair TransDigm's high margins with contracts that provide predictable revenue, and you have what could be a Wall Street darling for years to come.

Both Boeing and TransDigm are poised to benefit from similar tailwinds, but Boeing has languished whereas TransDigm has flourished. Boeing's share price and solid dividend look attractive for those who believe that the worst of the MAX scandal is over and that Boeing can restore its reputation. TransDigm's growth story shows no signs of stopping, but the company's high valuation is concerning. I think it's time for investors to start dipping their toes into Boeing and keep TransDigm on their watch list as an excellent aerospace and defense company to consider down the road.