Please ensure Javascript is enabled for purposes of website accessibility
Log In Help Join The Motley Fool
Free Article Join Over 1 Million Premium Members And Get More In-Depth Stock Guidance and Research
By Alex Planes - Feb 26, 2020 at 9:00AM

Building media brands that last is no easy feat, but success can be worth billions.

Done well, franchises can make big bucks for the companies that own them.

The top-grossing movie (Avengers: Endgame) and the top-grossing video game (World of Warcraft) of all time are both part of franchises -- long-running media properties with multiple iterations and derivative works spawned from a core creative concept, like superheroes saving the world, or an orc invasion. Their massive successes were built over years of careful audience cultivation.

But Marvel's cinematic universe, and the world of Warcraft, are more outliers than inevitabilities. Sequels are rarely sure things, and many franchise attempts have failed, sometimes even taking entire companies down with them. 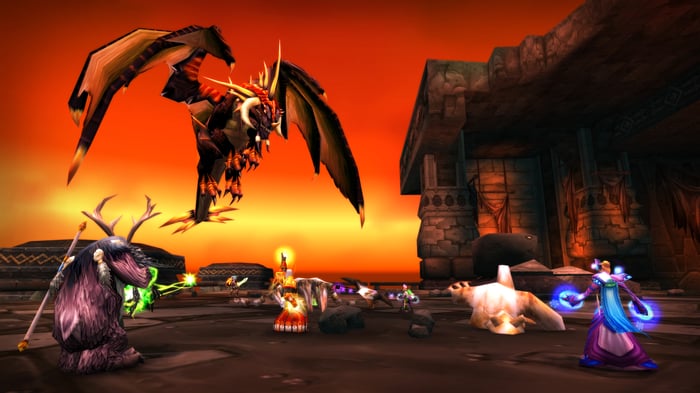 Through the years, only a few companies have enjoyed consistent success with a franchise-building formula. A few of these key companies continue to earn billions from their top franchises today.

If you're looking for an entertainment-focused stock for your portfolio, these are excellent stocks to consider. Let's take a look at three top franchise-makers now.

Video game developers have been trying to turn hit games into franchises since the 1970s. However, few have created gaming franchises that have endured as long, or earned as much money, as Nintendo (NTDOY 2.45%).

Pokémon's latest installment, Sword and Shield, was released just three months ago. It's already one of the franchise's best-selling titles.

Nintendo's one-third stake in The Pokémon Company (which controls the Pokémon brand), and its exclusive console publishing rights, have made Nintendo a lot of money. By some accounts, Pokémon is the most valuable media franchise in the world, with an estimated $95 billion in lifetime revenue from video and card games, TV shows and movies, comic books, and licensed merchandise -- the latter of which has brought in the bulk of Pokémon's revenue over the years.

Pokémon debuted in 1996, so this works out to almost $4 billion in revenue per year, or about $1.3 billion per year for Nintendo's third of the brand enterprise.

Mario hasn't reached Pokémon's level of multiplatform success, but it's still a reliable hitmaker for Nintendo. Since debuting in 1991, the Mario franchise has generated roughly $37 billion in sales. The most recent Mario game, Super Mario Maker 2, launched last June, and has since sold over five million copies for Nintendo's Switch console.

Nintendo's continued success with its core franchises should be of particular interest to investors because the company appears to be open to licensing deals, with a theme park expansion under way in Japan, and an animated Mario movie now in development for a 2022 release.

The Call of Duty franchise has earned Activision at least $18 billion since its debut in 2003. A new Call of Duty title typically sells at least 15 million units -- and multiple installments have each sold more than 20 million copies. Call of Duty Mobile represents the franchise's intensifying efforts to capture attention on smaller screens, particularly in China, where Activision has long partnered with Tencent (TCEHY -6.97%) to distribute its games. Warcraft, conceived in 1994 as one of the first real-time strategy (RTS) games, has since expanded to two RTS sequels, a MMORPG with seven expansions (plus one in development), and a digital card game (Hearthstone). Dominating these three genres has made the Warcraft universe over $17 billion in lifetime revenue.

Activision hasn't gone truly multiplatform with these franchises, but it's tried, with varying degrees of success -- Warcraft has spawned tabletop games, physical Pokémon-esque collectible card games, dozens of novels and comic books, and a 2016 live-action movie.

The company's 2016 acquisition of Candy Crush maker King added another massive franchise to its roster, and Blizzard's stylized shoot-em-up Overwatch is also one of the most valuable brands in esports.

Activision has done well with these core franchises, but its track record isn't perfect.

The company ran Guitar Hero into the ground with 12 titles in five years, making one further attempt in 2015 before ending the plastic-rockstar brand entirely. It also remains to be seen if Candy Crush or Overwatch can match the staying power of Call of Duty and Warcraft. Investors should watch how Activision manages these four core franchises in the future to make sure they don't become oversaturated.

Franchise diversification is always a good strategy for entertainment companies, and no company exemplifies this as well as Walt Disney (DIS -4.00%).

The Child (AKA Baby Yoda) in the Disney+ original The Mandalorian. Source: Walt Disney.

A big reason for these massive numbers -- besides the fact that Winnie and Mickey are nearly 100 years old -- is Disney's mastery of merchandising.

The Marvel universe doesn't include Spider-Man earnings (Sony still holds most of the film rights and has made most of that franchise's box office revenue) but the other four brands generate the bulk of their revenue from merchandising.

Disney does own Spider-Man's merchandising rights, and the web-slinger is Marvel's biggest merch mover by a long shot, with at least $15 billion in product sales since 2001.

Cars and Toy Story are both $20-billion-plus franchises on the strength of their merch sales. Frozen has also made more than $10 billion from merchandising alone.

Disney can maximize franchise opportunities like no other entertainment company, with a reach that spans broadcast and cable TV, streaming TV, film, theatre, video games, theme parks, and a cruise line.

Millennials and Gen Z kids grew up in a world saturated by Disney franchises. As the company continues to expand its roster of fictional worlds and characters, these consumers -- and their kids -- will continue to drive Disney's franchise growth into the future.