Please ensure Javascript is enabled for purposes of website accessibility
Log In Help Join The Motley Fool
Free Article Join Over 1 Million Premium Members And Get More In-Depth Stock Guidance and Research
By Jim Crumly – May 14, 2020 at 6:16AM

The stock is being boosted by the biotech's front-runner status in the race to produce a coronavirus vaccine, but where will the company be long after the pandemic?

Clinical-stage biotech Moderna (MRNA -4.72%) has been in the coronavirus spotlight in recent weeks because it's further along in the quest for a COVID-19 vaccine than any other company. There's no question that a commercial launch of vaccine to staunch the spread of the awful pandemic would be a boon to mankind and a boost to the company's shareholders, especially if Moderna ends up selling a billion doses of the stuff. The stock is up 222% so far this year, mainly due to the market handicapping the odds for this one product.

But what about the long term? It wouldn't be unreasonable to hope that five years from now, COVID-19 will be a distant, but painful memory. Where will Moderna be by that time, and should investors with a time horizon that long consider buying the stock now?

Moderna is no stranger to the bright glare of investor attention. When the company launched its initial public offering (IPO) in December 2018, it was the largest IPO of a clinical-stage biotech in history. And before going public, it had already attracted over $2.6 billion in private equity investments, had $1.2 billion in cash, and had already established partnerships with industry heavyweights like AstraZeneca, Merck, and Vertex Pharmaceuticals.

Despite the IPO fanfare, investors took a wait-and-see approach to the stock. As recently as March 13 of this year, shares were available for below the IPO price of $23, compared with today's price of $63. At play in the market's attitude toward the company's value is the balance between huge potential and the risk of unproven technology. 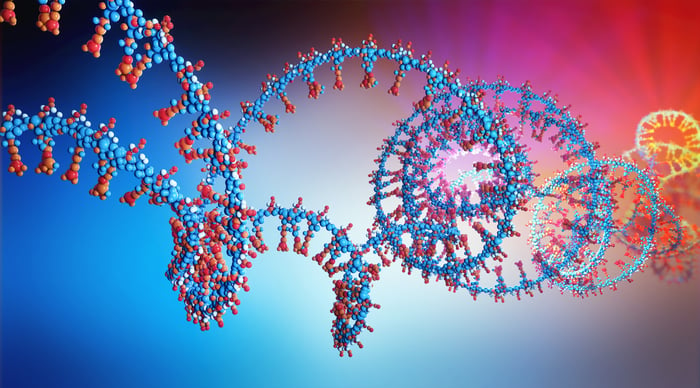 Moderna has created a platform to develop drugs based on messenger RNA, or mRNA, which the company calls "the software of life." Nearly all processes in the body involve proteins, with mRNA carrying the genetic codes for protein synthesis from DNA in the cell nucleus to ribosomes, the protein factories in the cytoplasm of cells. Moderna's scientists create mRNA drugs by splicing information into mRNA to induce cells to produce naturally occurring proteins that have therapeutic value in treating or preventing disease.

The power of Moderna's approach is that it can theoretically create a limitless number of drugs, since all disease processes involve proteins of one sort or another. In fact, the company's initial challenge was to narrow down what drugs it will invest in to begin with, out of a broad array of possibilities. Of six classes of drugs -- what the company calls modalities -- Moderna decided last year that it will focus on two: prophylactic vaccines and systemic secreted therapeutics, drugs that cause cells to secrete therapeutic proteins on their surface. The choice to prioritize vaccines turned out to be timed perfectly.

The pandemic played to a strength

Moderna's mRNA vaccines work on a very simple principle. Traditional vaccines introduce into the body viral proteins in the form of weakened or deactivated virus particles, inducing an immune response that's sufficient to kill off live viruses encountered in the environment. mRNA vaccines induce the body's own cells to manufacture a protein found on the target virus, which sets off the immune response.

One big advantage of Moderna's approach to vaccines is the speed at which the vaccine can be invented and manufactured. When COVID-19 appeared, that nimbleness was exactly what the world needed. The time from the day the sequence for the spike protein of the SARS-CoV-2 was finalized until the first participant in a phase 1 study of its vaccine candidate, mRNA-1273, was dosed was a mere 63 days. The company should be starting a phase 2 study soon, plans a phase 3 trial in early summer, and hopes for approval of the drug in 2021. The coronavirus pandemic accelerated Moderna's vaccine plans, with the U.S. Food and Drug Administration (FDA) more than willing to speed up processes to get the vaccine to the public.

It's easy to see why Moderna's stock is getting so much love now. Not only is there a large commercial potential for its COVID-19 vaccine, the rapid progress in a process that normally takes years seems to confirm the company's technology and potential for future vaccines and therapies of many different kinds. But the risks are all still there.

But will the drugs work?

Moderna's approach to developing a vaccine is the fastest one but not necessarily the best one. So far, we don't have any more evidence that an mRNA vaccine actually prevents disease than we did last year. Despite the rapid progression of clinical tests for mRNA-1273, we still haven't seen any data from the phase 1 trial yet.

The company has reported data from phase 1 trials of other mRNA vaccines it has in development for cytomegalovirus (CMV), respiratory viruses human metapneumovirus and parainfluenza type 3, and interim data from a Zika virus vaccine. Those results have been encouraging so far, but the only measures of efficacy have been blood levels of neutralizing antibodies. There is a big difference between observing an immune response and showing that vaccine prevents disease, something that can only be proved by a study with thousands of participants who are potentially exposed to the live virus.

In fact, Moderna has yet to produce data that shows that any of its 23 drug candidates can prevent or treat diseases, let alone proof strong enough for an agency approval. That's the big question mark hanging over the company, and it hasn't changed since the IPO.

An optimistic, but reasonable picture for 2025

If we assume that Moderna's technology proves effective, the opportunity for the company in the next five years is enormous. It's unclear how much money the company could make from the COVID-19 vaccine alone. Not only does it have to be proven effective, it will also need to beat out competition from over 70 other candidates being developed around the world.

But Moderna has eight other vaccine candidates, six of which are in human trials or soon could be. The company believes the peak annual sales potential for the vaccines in this portfolio is between $6.5 billion and $12 billion. Its most advanced vaccine besides the coronavirus candidate is mRNA-1647 for CMV, and the company estimates peak sales for that product alone of $2 billion to $5 billion. A successful COVID-19 vaccine would also show that the company could very quickly address new viral threats as they emerge; the novel coronavirus won't be the last one.

Moderna's other core modality is systemic secreted and cell surface therapeutics, and in that class the company has a candidate in a phase 1 trial that causes cells to secrete antibodies to the chikungunya virus, as well as pre-clinical candidates for heart failure and autoimmune diseases. Beyond these medicines, the company has candidates in its other four modalities for a personalized cancer vaccine and several treatments for rare diseases and for specific cancers. Altogether it has 15 medicines in the clinical stage and the ability to create more drug candidates if it wanted to broaden its focus.

Moderna has said that it believes it will file applications for "several" drugs in the next three to four years. It's not a stretch to project that the company could have multiple blockbuster drugs on the market by 2025, assuming its technology succeeds, with significant pipeline advancements in a dozen other drug candidates. With access to $2.4 billion in cash and a cash burn rate of about $500 million per year, Moderna is well funded to execute its plan.

A gamble with a potentially large payoff

It would not be unusual for a biotech stock of Moderna's growth potential to be valued at 10 to 15 times sales when it's in the commercial phase, and with today's market capitalization of $24 billion, the stock could triple or more by 2025 if the optimistic scenario above comes to pass. But with the technology still unproven, the share price could go in the other direction, too, if there are setbacks.

In the short term -- just looking ahead to next year -- I think the risks outweigh the benefits, given the expectations for the coronavirus vaccine that are now built into the stock price. But longer term, the stock is more interesting because of the potential of its mRNA platform to turn out a steady stream of new drugs. I think an investor who is willing to hold Moderna shares for five years has a reasonable chance for a big payoff, but it's not a sure thing at all.