Please ensure Javascript is enabled for purposes of website accessibility
Log In Help Join The Motley Fool
Free Article Join Over 1 Million Premium Members And Get More In-Depth Stock Guidance and Research
By John Rosevear – Updated Jul 30, 2020 at 10:01AM

Investors have a Kandi crush, but is the electric-car maker already overvalued?

As of 10 a.m. EDT, Kandi's American depositary shares were up about 23.7% from Wednesday's closing price, and up almost 200% from Tuesday's close.

The company's U.S. subsidiary, Kandi America, said on Wednesday that it will launch two battery-electric cars in the United States. The cars' official launch will take place during a virtual event on Aug. 18, at which time interested customers will be invited to make a (refundable) $100 deposit.

It's hard to see demand soaring "off the hook" for the two Kandi cars, however. They're both small, low-power vehicles that seem to be aimed at urban commuters, very different from the sleek and quick Teslas that have captured the interest of so many tech-savvy buyers. 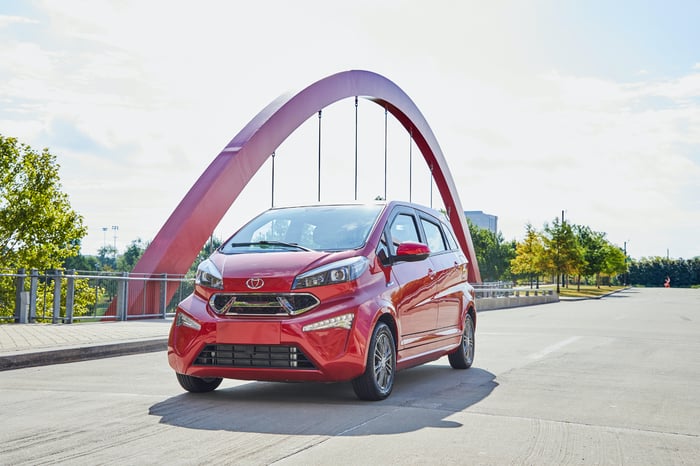 Will Americans line up for the $29,999 Kandi K23? Image source: Kandi Technologies.

Yes, the K23's "no-haggle" $29,999 price buys you "estimated" range of under 200 miles and a top speed that is barely enough to drive on an American highway. But the stock is up big anyway.

Forget Tesla for a moment. How many Americans will choose that $30,000 Kandi over a Chevrolet Bolt or Nissan Leaf, either of which can be had for similar money?

The Bolt and the Leaf both offer better range, top speeds suited to American highways, nationwide service networks, and solid build quality. While we won't know how Kandi's build quality will compare until we see the cars up close, we already know that Kandi can't match the functionality or value of either.

Kandi's stock is surging today because auto investors are excited about electric vehicles; but Kandi may not be able to deliver on the expectations that are already baked into its stock price. Be very careful with this one.