Please ensure Javascript is enabled for purposes of website accessibility
Log In Help Join The Motley Fool
Free Article Join Over 1 Million Premium Members And Get More In-Depth Stock Guidance and Research
By Daniel Foelber, Scott Levine, and Lee Samaha - Jun 12, 2021 at 8:00AM

Air traffic is recovering and expected to boom this summer.

June is here and most schools are now on summer vacation. The success of the vaccine rollout and an economy that is kicking into high gear is great news for severely impacted industries like airlines, which make hay during the summer travel season.

With that, we asked some of our contributors which airline stocks they thought had the best chance to succeed over the next five years. They chose JetBlue Airways (JBLU 0.00%), Southwest Airlines (LUV 0.05%), and Allegiant Travel (ALGT -3.98%). 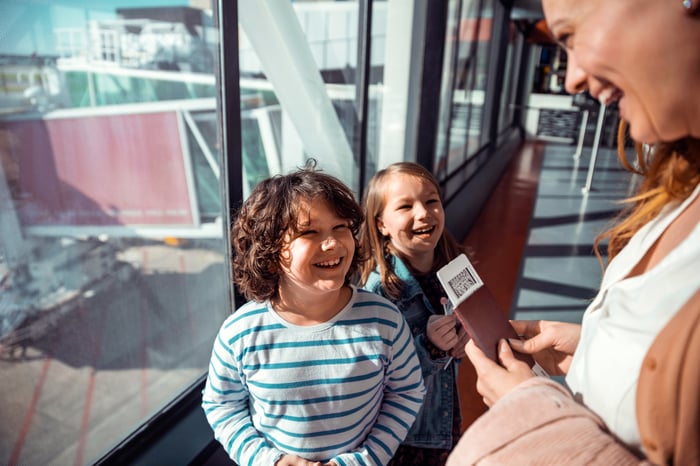 Off we go into the wild blue yonder

Scott Levine (JetBlue): Like so many airlines, JetBlue has faced formidable headwinds due to COVID-19. Investors recognized the inevitable turbulence that the pandemic would bring and sent the stock into a nosedive; in 2020, shares plunged more than 68% from mid-February to late March. With passengers starting to take to the skies again, however, the stock has since rebounded, climbing more than 173% since the end of March 2020. And there's reason to believe that its ascent will continue even higher.

For one, management is taking significant steps to ensure the company's return to profitability. In 2021, management forecasts capital expenditures of about $1 billion, which will mostly go toward taking delivery of new aircraft. During the first quarter, for example, JetBlue took delivery of three Airbus A321neos, and it expects to take delivery of six additional aircraft in the second quarter: two A220s, two A321neos, and two A321LRs. By updating its fleet -- with the A220s and A321neos in particular -- the company expects to improve fuel efficiency and thus generate a stronger margin.

Reaching new shores represents another opportunity the company is seizing to achieve future growth. Last month, JetBlue announced that it would begin flights to London -- with round trip fares under $600. Flights between New York's John F. Kennedy International Airport will begin this August, while flights from Boston are scheduled to begin in summer 2022.

Expanding beyond its core competency, JetBlue has other initiatives geared around growing revenue, such as the highly individualized travel planning website, Paisly. Launched in Q1 2021, Paisly uses a customer's flight information to provide specialized recommendations for other travel needs like hotel stays and car rentals. Though it's early in its deployment, if Paisly is a success it can provide a more sticky experience for customers that will keep them increasingly engaged with JetBlue.

While it will surely take time for JetBlue to recover from the effects of the pandemic, management sounded encouraging on the company's recent Q1 2021 conference call. According to Robin Hayes, the company's CEO, the company has "seen positive cash from operations for March and this milestone is our first step toward achieving positive EBITDA and returning to profitability." Later during the call, JetBlue CFO Steve Priest forecast that in terms of EBITDA, the company would "reach breakeven in the third quarter and expect to remain in positive territory through the end of the year."

Daniel Foelber (Southwest Airlines): According to the latest CDC data, around 41% of the U.S. population is fully vaccinated as COVID-19 cases continue to come down. The vaccine rollout is great news for airlines, which have seen an impressive uptick in traffic. TSA data suggests that May 2021 travel volumes were down just one-third from May 2019, a vast improvement from the 90% decline experienced in May 2020.

Southwest was one of the few airlines to turn a first-quarter profit. Equally encouraging is its summer forecast. In its investor update (released on Tuesday), Southwest said it expects to achieve breakeven core cash flow in June, a sign business is returning to its old form. Southwest has been fighting tooth and nail to reduce its cash burn, which averaged $16 million per day in June 2020.

Investors should keep a close eye on Southwest's ability to capitalize on the expected boom in summer travel. For context, Southwest's second quarter 2019 delivered record-high revenue and diluted earnings per share of $5.9 billion and $1.37, respectively -- which shows how well its business was performing pre-pandemic.

Southwest's claim to fame has long been the strength of its balance sheet. Its debt-to-capital and financial debt-to-equity ratios are understandably higher now than they were a year ago. But to its credit, Southwest maintains the best balance sheet of the major U.S. airlines. 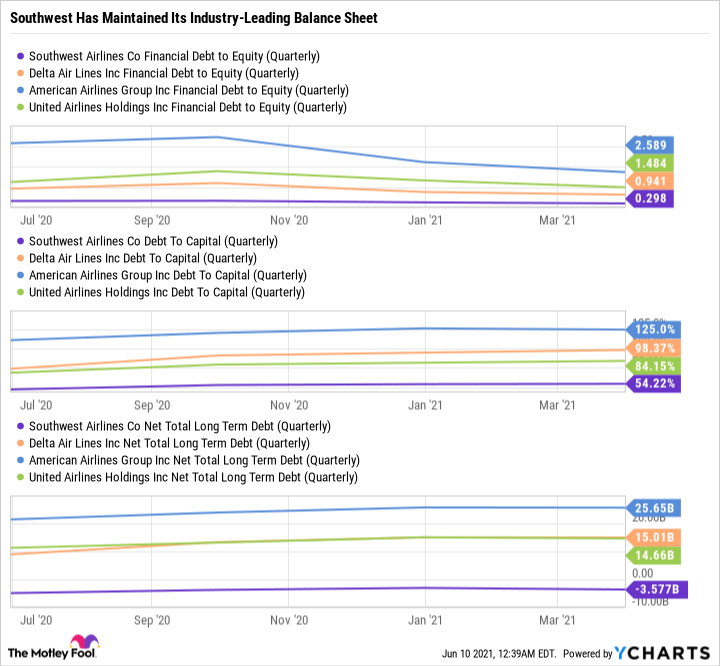 Given its cost reductions, optimistic forecast, and leading financial health, Southwest is the safest airline to buy right now. The only downside is that its share price of around $58.50 is just 13% lower than its all-time intraday high of $66.99. In other words, much of Southwest's anticipated turnaround could already be baked into its share price.

Lee Samaha (Allegiant Travel): Investing in airlines is about crunching the numbers and also about investing in the themes and trends that end up making the numbers. That consideration springs to mind when looking at the current state of the airline industry and the questions around it.

Will business travelers (a lucrative source of income for many airlines) come back strongly, or has the pandemic changed the need for corporate travel? What is the timing of recovery in international travel going to look like? Will travelers display any resistance to flying on a Boeing 737 MAX aircraft?

If you are overly concerned by these issues, aside from aerospace suppliers or aircraft leasing companies, investing in Allegiant Travel stock might be the place to go.

Put succinctly, Allegiant is a U.S. domestic leisure-orientated travel airline running an all-Airbus fleet that services consumers living in small to medium-sized cities. As such, it's a play on the U.S. consumer's willingness and desire to enjoying leisure travel after the constraints on travel imposed by lockdown measures.

CEO Maury Gallagher certainly believes Allegiant is gearing up for a strong summer. Back on the last earnings call in early May, he said that "we believe our income levels for the remainder of 2021 and '22, and beyond, will meet or exceed our last full year of '19." Moreover, he lauded the company's average operating margin of 15% over the last 20 years as evidence of Allegiant's powerful position in a relatively niche market.

Trading on just 13.5 times earnings estimates for 2022, Allegiant looks a decent way to invest in the airline sector.