These high-quality growth and dividend stocks are down but not out.

Earnings season can be a great time to gauge company performance and outlook. But it can also be a time of high volatility where stocks can get rewarded or punished for short-term results. Over the past couple of weeks, a lot of stocks have gone on sale for good and bad reasons. For the purposes of this discussion, we're looking at top companies that have sold off for bad reasons.

With that, we asked some of our contributors which industrials stocks have gone on sale that could be worth buying now. They chose United Parcel Service (UPS -3.67%), PPG Industries (PPG -2.08%), and TPI Composites (TPIC -5.60%). 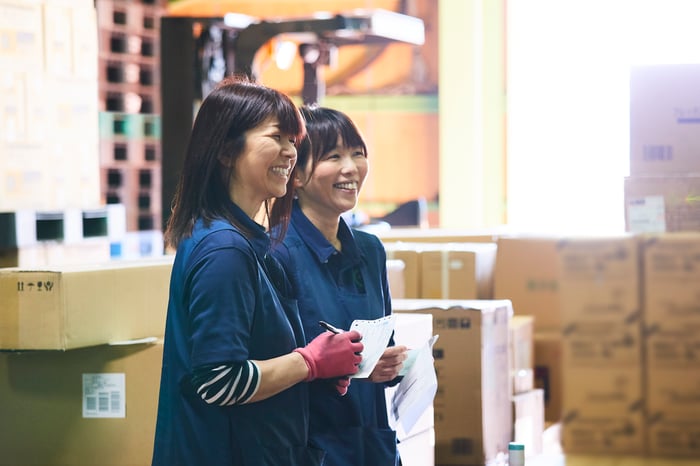 Daniel Foelber (UPS): Shares of UPS slid more than 10% last week. The company's stellar second-quarter 2021 results weren't enough to impress Wall Street, which has grown accustomed to UPS' quarter after quarter of impressive growth. For context, UPS was one of the best-performing major industrial stocks of 2020. Despite strained business-to-business sales, UPS benefited from higher package delivery volumes to residential customers during the pandemic. However, there's a lot more to its growth story than just this short-term windfall. UPS' international business, healthcare segment (which was instrumental in the vaccine distribution), and push into e-commerce were also meaningful tailwinds.

As my colleague Neha Chamaria pointed out, the most likely reason why UPS stock sold off last week had to do with slowing business-to-consumer (B2C) delivery volumes. Management has been up-front about the likelihood that B2C volume growth would decline but has been confident that these declines will be more than offset by its other segments. During its Q2 2021 conference call, UPS said it's much more focused on growing revenue and profits from small to medium-sized businesses and other segments than simply growing volumes. Investors should keep in mind that not all volumes are created equal. UPS tends to fetch lower profit margins from B2C volumes. So, if it can make up for volume declines in B2C through other more profitable segments, then it's a net win for the business.

UPS' quarterly figures prove the company is flourishing despite lower B2C growth. The company was able to generate a staggering $6.8 billion in free cash flow in the first half of 2021. "This is a record," said UPS CEO Carol Tomé. "We've generated more free cash flow in the first six months of this year than we previously generated in any full year at any time in our company's history."

FCF can be used to pay down debt, buy back shares, reinvest in the business, and pay dividends. Supporting dividend payments with FCF is a sign that a business can afford its existing dividend and support dividend raises in the future. UPS pays a sizable dividend of $4.08 per share per year, which is an annual yield of 2.1% at today's stock price. Impressively enough, UPS only used 25% of its FCF to pay its dividend for the first half of the year, which puts into perspective the sheer quantity of FCF this business is raking in. The long-term thesis hasn't changed one bit, and if anything, is looking even better. UPS remains a solid buy right now.

Lee Samaha (PPG Industries): Paint and coatings company PPG Industries' stock has been on the slide recently. The reason comes down to a combination of rising raw material prices and lower-than-expected light vehicle production. For reference, PPG tends to generate around 30% of its sales from the automotive sector through the original equipment manufacturer and aftermarket refinish markets.

Automotive manufacturers have curtailed production in 2021 due to a much-documented shortage of semiconductors. Meanwhile, raw material prices have risen this year due to a snapback in demand after a period of supply restrictions.

It's never good for a company to miss earnings estimates and guide toward earnings below market expectations. However, PPG's issues will likely prove temporary. Indeed, the company has already initiated price increases to offset the cost increases. During the earnings call, CEO Michael McGarry said he "fully expects to offset raw material cost inflation in the fourth quarter of 2021 on a run-rate basis."

Meanwhile, the automotive production curtailments are expected to be deferments rather than cancellations, and the end demand for autos remains strong. In short, the issues that are negatively impacting PPG in 2021 will probably disappear in 2022. As such, the recent weakness is a buying opportunity in an excellent long-term growth industry.

Scott Levine (TPI Composites): As the S&P 500 and Dow Jones Industrial Average touched record highs this week, budget-minded investors are finding it increasingly difficult to find quality stocks on sale. With the economy continuing to recover, companies from a wide swath of industries have been reporting strong earnings, leaving some value investors at a loss for opportunities. All hope of a bargain bin find isn't lost, however. TPI Composites, a leading supplier of composite wind blades to customers around the world, is on the discount rack, and those on the prowl for a quality renewable energy stock should snatch it up before its price shoots back up.

Over the past five days, shares of TPI Composites sank nearly 9%. No, there's nothing fundamentally wrong with the business. Instead, the sell-off is related to Wall Street assuming a bearish position. On Tuesday, Roth Capital reduced its price target to $50 from $60, and last week, Cowen dropped its price target to $47 from $65. In both cases, the motivation for the lower price targets stemmed from the company's weaker Q2 2021 earnings -- a net loss of $42.6 million -- and 2021 guidance. The company had originally forecast 2021 revenue of $1.75 billion to $1.85 billion, but it narrowed its view and now expects 2021 sales of $1.75 billion to $1.8 billion. Similarly, the company had initially forecast 2021 adjusted EBITDA of about $123 million, but it now is guiding for 2021 adjusted EBITDA of about $78 million.

It's no surprise that Wall Street has espoused a bearish view considering the company's downwardly revised 2021 guidance since analysts often base their opinions with short time horizons in mind.

And that suits us long-term investors just fine.

The recent downturn in the stock presents a great opportunity for those of us who are willing to be patient and let the booming renewable energy industry continue to prosper. Although the company may not have the wind at its back in 2021 and 2022, it may be poised to prosper in the long run -- a point the company's president and CEO, Bill Siwek, articulated in a recent press release. Siwek referenced the International Energy Agency's expectation that "by 2030, 390 GW [gigawatts] of wind energy will be installed annually, or about four times more than the record set in 2020, and that wind energy will be the single largest generator of electricity making up 35% of total generation by 2050."