Not every stock is built to last, but a few big winners could change your life.

The idea of holding any stock forever may seem daunting. Picking growth stocks for the ultra-long term can be even more challenging, as companies in the category typically have valuations with strong future performance already baked in. However, giving high-quality growth stocks time to flourish can transform your investing performance. As just one example, Amazon stock has surged roughly 33,000% over the last 20 years.

With that in mind, three Motley Fool contributors have identified Airbnb (ABNB -1.74%), Alphabet (GOOG -2.22%) (GOOGL -2.10%), and Starbucks (SBUX -0.21%) as stocks that are likely to deliver excellent returns for patient investors. Read on to see why they think that these companies could power your portfolio for decades to come. 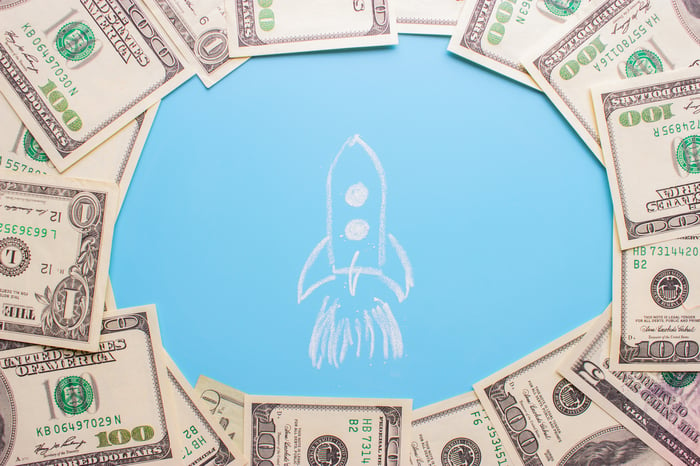 Keith Noonan (Airbnb):  Growth-focused companies often start out delivering innovative new products and solutions that can help them achieve market dominance. However, after a certain point, the size of the company discourages it from taking on new innovation initiatives because they aren't capable of moving the needle significantly -- or because they're simply not cost effective.

Even worse, pushing into innovative new categories and products might take away from the company's core revenue streams. Business theorist and innovation expert Clayton Christensen dubbed this dynamic "the innovator's dilemma" and went on to describe the issue in depth in his hugely successful book of the same name.

Airbnb has already had a disruptive impact on the travel and hospitality industries. With the company sporting a market capitalization of roughly $97 billion, it's not unreasonable to wonder whether this growth stock still has room to run or if it will settle into less impressive performance.

Will Airbnb bump up against the innovator's dilemma as it expands? Sure. However, I think the vacation rental platform is positioned to go the distance and deliver stellar returns for investors who buckle in for the long haul.

Despite the company's incredibly successful run since its founding in 2008, Airbnb is likely still in the early stages of reshaping the travel industry. Management's recent push into combining accommodations bookings with ticket sales to local experiences and events also shows that the company isn't afraid to branch out and pursue new growth opportunities.

Airbnb's business will mature, and growth will likely slow at some point. However, most signs point to it being a fantastically run company with an expanding competitive advantage, and I think the stock will deliver stellar returns over the long term.

James Brumley (Alphabet): If I have to make a lifetime commitment to a stock, it's got to be Google's parent Alphabet. It may well be the perfect "forever" company.

Think about it. Brick-and-mortar retailers are being made obsolete by the internet. Fossil fuels are falling out of favor thanks to renewables. Gas-powered automobiles are being replaced by electric vehicles. These aging companies can try to pivot into the new way of doing things. But as names like Ford and Macy's can attest, pivoting from outdated approaches to new ones is difficult. Alphabet's massive web-search business isn't ever likely to run into the obsolescence or failed-pivot problem.

That's not to suggest how we browse the internet won't evolve over time. I just can't ever envision a time when we won't want to simply type in a few key words and be pointed in the right direction. And, in that Google's global search market share is north of 90%, I also can't envision a time when it's not the go-to search engine.

That said, perhaps the coolest part about owning Alphabet is, unlike the aforementioned Ford and Macy's (and thousands of companies like them), Alphabet has already shown us this willingness and capacity to evolve. It didn't used to own Android; it saw what mobile was becoming. It didn't used to own YouTube; it saw what online video was becoming. Not every for-profit corporation is built to add new businesses that complement its existing ones so well.

Daniel Foelber (Starbucks): Starbucks is celebrating its 50th anniversary this year, making the company the same age as Southwest Airlines and Walt Disney World. Since going public in 1992, Starbucks has been through its fair share of market turbulence -- from the dot-com bubble burst, to the Great Recession, to the pandemic-induced crash of spring 2020. Through it all, the company has found a way to emerge stronger and more valuable over time. In fact, its Q3 fiscal year 2021 sales and net income figures show its business has largely rebounded from last year's declines. 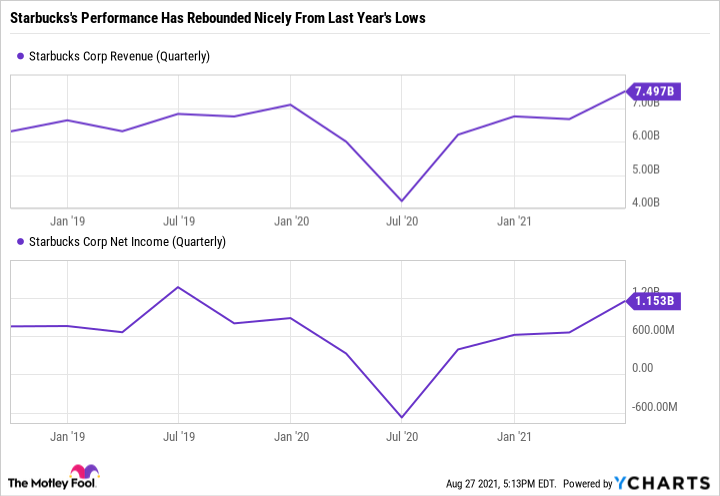 Even within striking distance of an all-time high, there's a lot to like about Starbucks stock going forward. Limited to curbside pickup and drive-thru access during the pandemic, customers were encouraged to adopt mobile ordering and become Starbucks Rewards members. Ordering ahead and gaining rewards makes it easier to increase the frequency of visits and spend more money per visit. It also makes it easier to customize drinks, which is one way Starbucks separates itself from the competition, makes customers happy, and makes more money.

Active Starbucks Rewards members are now 24 million, growing 8% from the pre-pandemic figures. Starbucks Rewards-related spending makes up over half of total U.S. spending, making it one of the most successful rewards programs in America. Furthermore, nearly 75% of transactions now occur via drive-thru or mobile ordering for in-store or curbside pickup.

The lesson here is that the company continues to find ways to make its customer experience better. It's a win-win situation that saves customers time, lets them get the exact drink they want, and allows them to accumulate rewards -- in turn growing Starbucks' top and bottom lines. With a loyal customer base and plenty of room to continue expanding internationally, Starbucks is a stock worth buying and holding forever.

Airbnb's Path to Becoming the Amazon of Travel