The recent decision by the IRS to bless these new Roth IRA contribution limits could have you jumping for joy. Photo: Pixabay

There may be no better investment vehicle for retirement than a Roth IRA. For those who are trying to sock away as much as possible -- especially those with a desire to retire early -- there's one caveat that gets in the way: Currently, Roth IRA contribution limits allow you to put only $5,500 (or $6,500 if you're over 50) into these accounts per year.

That's unfortunate, because once cash is put in a Roth IRA, you're generally done paying taxes for good on that money. In addition, after five years, you can withdraw any and all of your principal (but not growth) from your Roth without paying any taxes or penalties -- even if you're decades from retirement.

But recently, the IRS issued guidance that could change the landscape for high earners looking to voluntarily exit the daily grind at a younger age. Thanks in large part to the work of the Mad Fientist blog, people now are aware of a way to sock away over $30,000 in your Roth IRA per year!

Step one: Get your house in order

Let's get one thing clear from the get-go: This isn't a strategy ideally suited to everyone. It will work most effectively for those who both earn a salary above the national average and have little interest in spending that money on "stuff" or frivolous pursuits.

If you fit within that category, then you are surely aware that there are a myriad of different investment vehicles you can use to help reach your retirement goals at an early age. These include Roth IRAs, traditional IRAs, and your company's 401(k) or 403(b) plans. The key to this special backdoor Roth IRA comes from your company's 401(k) or 403(b) plan.

That may sound confusing, as most people only know about the first limit and not the second. How can you fill the gap between the two? 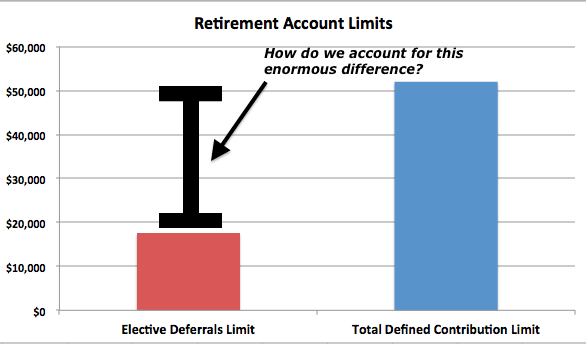 Well, for one, there are company matches -- which you should always take full advantage of. Then there are Roth 401(k) contributions, which use after tax-dollars but allow principal to grow and be withdrawn tax-free.

And then there's the little-known "after-tax 401(k) contribution." Together, all of these streams are allowed to combine to $52,000 total in 2014. It's this last bucket that can help turbo-boost your Roth IRA contribution limits.

"OK, but why in the world would I do that?"
On the face of it, this seems ridiculous. The whole point of 401(k) plans is that the money you put in is untaxed, and it usually helps lower your overall taxable income in any given year. Because 401(k) withdrawals are taxed, it seems there's little incentive to contribute after-tax money to a 401(k).

But that's where our friend the Mad Fientist comes in. After hounding the IRS for an explanation on how conversions can be used, he realized that "you can easily divert ... the after-tax portion [of your 401(k) or 403(b)] to your Roth IRA, without paying any tax."

Steps to take
Obviously, this is a somewhat complicated process, so contacting your financial advisor and your company's 401(k) provider is the most important step to take. Some plans don't allow for after-tax contributions -- which would make this strategy null and void.

Still others won't allow for "in-service withdrawals." In layman's terms, this simply means that you can't divert your after-tax 401(k) money into a Roth until you leave your current job. You could still, of course, take advantage of this strategy when you leave your job, but any growth your after-tax principal experiences could be taxed upon withdrawal.

But if, after taking the requisite steps to ensure this is the right plan for you, you realize you can use this strategy, the IRS has given you a huge gift: the go-ahead to make a mega-backdoor Roth contribution -- every year!

How to Ignore Roth IRA Contribution Limits and Put Away Over $30,000 Per Year @themotleyfool #stocks Next Article
Current