Pharmaceutical companies have had some of the best-performing stocks over the last couple of years thanks to an innovation boom that has produced a host of new game-changing drugs, from Gilead Sciences' (NASDAQ:GILD) hepatitis C therapy Sovaldi and its follow-on Harvoni, to Merck's (NYSE:MRK) revolutionary new cancer treatment Keytruda. Pharma stocks have crushed the broader market in recent years, as shown by the incredible performance of the iShares Nasdaq Biotech Index (NASDAQ:IBB): 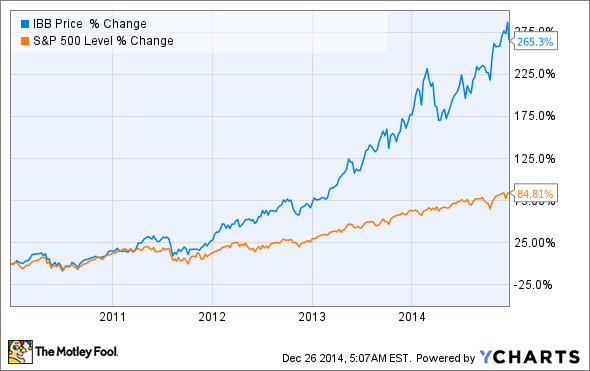 This wave of breakthrough new therapies has, in turn, led to impressive levels of revenue growth across the healthcare sector. This trend might come to a screeching halt, though.

Earlier this month, the somewhat shocking announcement that pharmacy benefits manager Express Scripts (NASDAQ:ESRX) had cut a deal with AbbVie (NYSE:ABBV) to favor its newly approved hepatitis C therapy Viekira Pak for genotype 1 patients, over Gilead's competing drugs, appears to mark a sea change in the pharma landscape that could trigger a major reversal in these stocks. Here's why.

Cold war turns "hot"
Payers have grown increasingly frustrated with soaring drug prices, and Express Scripts has been among the most vocal companies on this hot-button issue. But words are starting to turn to action.

In 2014, Express Scripts knocked 48 branded drugs off of its formulary, and it upped this number to 66 for 2015 (prior to excluding Sovaldi for genotype 1 patients). Revised formularies from Express Scripts and other pharmacy benefit managers like CVS Health (NYSE:CVS)are having a major impact on pharma companies. The competition between AbbVie's and Gilead's respective hep C drugs illustrates this point nicely.

AbbVie's stock should have soared after it procured an exclusive multiyear agreement with Express Scripts for Viekira Pak. Instead, the company's shares ended the day essentially flat, while Gilead's crumbled by double-digits.

AbbVie reportedly had to significantly discount its drug to get this "sweetheart deal," presumably reducing its profit margin in a major way. While details of the deal have not been made public, the way AbbVie's shares reacted indicates the market clearly was not impressed.

Misery loves company
Gilead is far from alone in this battle against payers, and this issue is not restricted to costly new hep C drugs.

GlaxoSmithKline (NYSE:GSK), for instance, has been in a losing fight with U.S. payers over its newer respiratory drugs, including Breo Ellipta, failing to gain the coveted preferred formulary status with Express Scripts this year. The result has been anemic sales for a drug expected to succeed the blockbuster Advair, a massive workforce reduction, and a stock price that has fallen off a cliff: 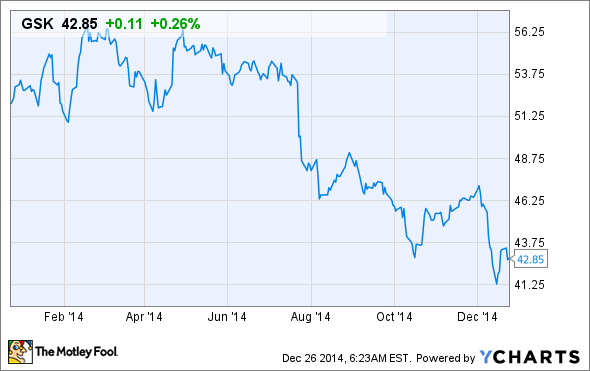 Investors need to accept that this payer pushback against pricey new drugs is rapidly becoming an industrywide issue. CVS Caremark, for example,(NYSE:CVS)excluded a whopping 95 brand-name drugs from its formulary for 2015, and said this list could grow to 200 in the final version.

The message from payers is clear: Give us significant discounts or your drugs won't receive favorable reimbursement terms -- or be covered at all.

Glaxo could be setting the stage for a new pharma landscape
After its well-chronicled problems with U.S. payers that Glaxo management aptly referred to as a "new reality in U.S. primary care," CEO Andrew Witty began shifting the company's focus from drugs to vaccines and consumer healthcare products.

Put simply, Glaxo is now looking elsewhere for growth, perhaps as a way to avoid the uncertainty that comes with convincing U.S. payers that a new drug should receive a reimbursement premium. The inevitable result will be a much smaller company, but maybe one that is better suited to this so-called new reality.

Why pharma stocks might plunge in 2015
At the end of the day, I think this highly publicized "Gilead-Express Scripts feud" speaks to the broader issue of how pharma companies could struggle to continue posting unprecedented levels of growth. After all, AbbVie won't exactly receive a windfall from its deal with Express Scripts due to its massive discount to this particular payer. Instead, it might have kicked opened up Pandora's box by essentially giving payers the power to set drug prices.

If this trend continues, and major payers have already said it will, I expect the double-digit revenue growth that many pharmas are collecting to dry up, and stocks to pull back as a result. How much is anyone's guess. But Glaxo's dramatic fall and subsequent streamlining efforts could be a harbinger of things to come across the industry.