The construction materials industry is a tough place for income investors. That's because these companies operate capital-intensive businesses that consume a significant portion of their operating cash flow. Meanwhile, what free cash flow these companies do generate often gets allocated toward share repurchases and acquisitions over dividends.

That's clear by looking at dividends yields across the cement sector. Several large producers, including Cemex (NYSE:CX), don't currently pay a dividend. In Cemex's case, it ceased paying a cash dividend during the financial crisis and has redirected that cash toward debt reduction and other priorities ever since. Meanwhile, those that do return cash to shareholders only pay a pittance:

Here's a closer look at where the cement sector's top three dividend payers spend their cash instead of allocating more toward the payout. 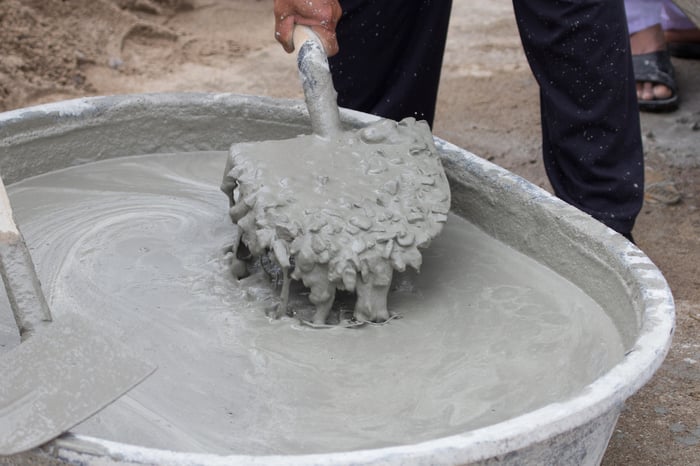 Eagle Materials is coming off a record-breaking year thanks to improvements in not just its cement business but in both its wallboard and paperboard segment as well as in oil and gas proppants. That across-the-board success drove revenue up 6% to $1.2 billion, while cash flow from operations jumped 25% to $331.6 million.

Eagle Materials allocated that cash flow toward several initiatives. It spent $56.9 million off the top in capital expenditures (capex) to keep its plants running well, leaving it with $274.7 million in free cash flow, which is up 56% from the year-ago period. The company could have used that cash flow to pay a generous dividend to investors. However, it only paid out $19.3 million in cash last year, which was down slightly versus the prior year due to the impact of share repurchases. The materials producer allocated the rest of its cash toward share repurchases and acquisitions. Last year share repurchases amounted to $60 million, which was half what it bought back the previous year. The reason its repurchase rate was down is that the company used the bulk of its remaining free cash flow (and then some) to buy a cement plant in Fairborn, Ohio, from Cemex. The company spent $400.5 million on that facility, which it paid for by borrowing a net $178.4 million in debt. That deal aside, Eagle Materials clearly favors share buybacks over dividends when it comes to returning cash to investors. Unless that priority changes, the company probably won't hold much appeal to income investors.

Aggregating capital toward other options

Martin Marietta Materials produces a variety of building materials including aggregates, cement, ready-mixed concrete, and asphalt. Like Eagle Materials, Martin Marietta has been on a record run lately thanks to robust demand for those materials. In the first quarter of 2017, for example, sales were up 7.9% to a new record of $791.7 million, while profit also hit a record $147.1 million. Those strong results gave the company the confidence to return $126 million in cash to shareholders during the quarter.

That said, Martin Marietta also favors share repurchases when it comes to returning cash to shareholders. Of the $126 million it returned to investors last quarter, $100 million went toward repurchasing shares. That continued the company's trend of allocating excess cash flow toward buying back stock. For example, during 2015 and 2016 Martin Marietta returned four times more cash to investors via a buyback than it did in dividend payments. Unless that preference changes, income investors shouldn't expect more than a paltry payout from Martin Marietta Materials. 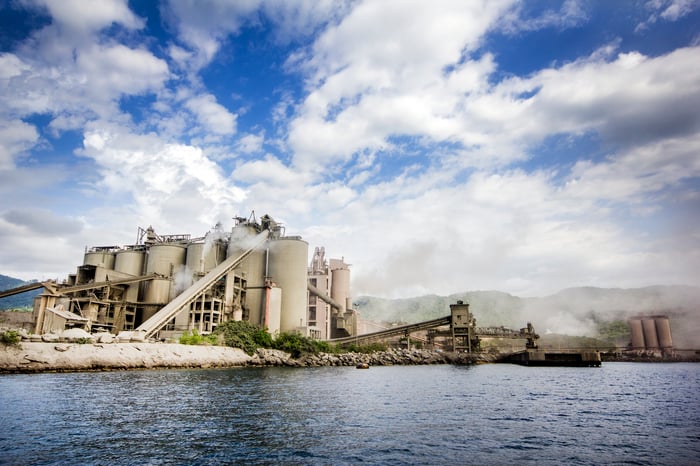 Vulcan Materials produces a variety of construction materials, including being a significant producer of Portland cement concrete. Demand for those building materials has been healthy over the past year, which drove a 2% increase in revenue to $3.6 billion, boosting adjusted EBITDA up 5% to $960 million. Because of that, the company has generated substantial cash flow from operations to use as it sees fit.

However, paying a dividend wasn't Vulcan Materials' top priority for that cash flow. During 2016, for example, the company generated $644.6 million of cash from operating activities, and while it returned $268 million to investors, 60% went toward buying back stock. Meanwhile, the company allocated the rest of cash flow on capex, including investing $100 million in growth-related initiatives. The company has continued that growth-focused spending in 2017, closing $198 million in acquisitions and investing $35 million in growth-focused capex during the first few months of the year, primarily paying for that growth with new debt and excess cash. Because Vulcan Materials has put a priority on growth and repurchasing stock, its dividend will remain rather unappealing to income investors.

As the top-yielding concrete stocks clearly show, the sector isn't the best place for income-seeking investors to go searching for dividends. That's because these companies spend a significant percentage of their cash flow on capex just to keep their plants running in tip-top shape. After that, cement producers prioritize free cash flow toward acquisitions and share repurchases over dividends. That's why the top dividend-paying stocks in the sectors don't have very high yields when compared to what income investors can earn in other industries.