So you say you want to buy a candy stock? Maybe something for your kids, or grandkids, as a way to get them interested in investing?

Well, I applaud the idea in theory, but I've also got bad news for you. At today's prices, most candy stocks make for horrible investments. So if you rush right out and invest in shares of Hershey (NYSE:HSY), Mondelez (NASDAQ:MDLZ), or Tootsie Roll (NYSE:TR), chances are you could turn off your kids to investing for a generation or more. These investments will melt in your mouth and your hands, turn into a chocolate disaster pretty much all over the place, and make an absolute mess. But there's one candy stock that looks bit more appetizing. Keep reading to find out which it is. 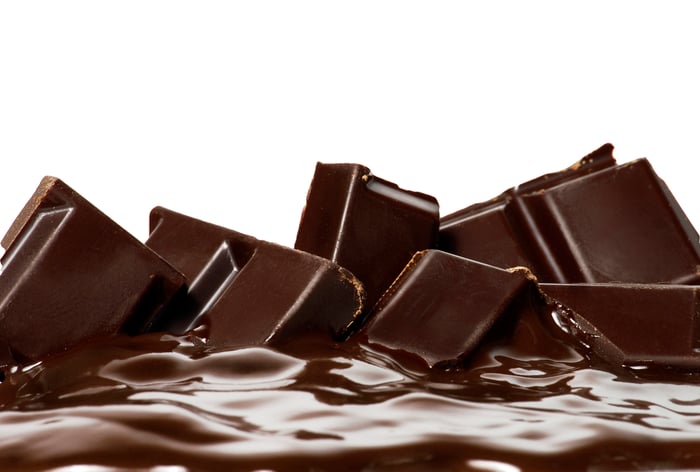 Allow me to lay out a few helpful numbers, and then I'll explain what they mean.

Hershey owns a stable of well-loved brands, including its eponymous Hershey brand, of course, but also Reese's, Twizzlers, and Kit-Kat.

Priced at 40 times earnings, Hershey stock costs 57% more than the average stock on the S&P 500. It's arguably even more expensive than it looks. S&P Global Market Intelligence data shows the company carrying $2.6 billion more debt than cash on its balance sheet, giving Hershey a debt-adjusted price-to-earnings ratio of 44.4. Yet despite costing more than average, Hershey's 2.1% dividend yield is no better than average, and its 7.6% projected  earnings growth rate falls significantly below the stock market's 9.4% average.

Suffice it to say that paying more than average for a below-average dividend payer and below-average grower doesn't buy you a piece of "premium chocolate." It's just a Hershey bar -- at a too-high price.

Projected to grow at 9.3% over the next three to five years, Cadbury and Toblerone chocolatier Mondelez comes a bit closer to the average in respect to growth expectations. However, Mondelez's 1.6% dividend yield is significantly less generous than what most dividend stocks on the S&P pay.

In terms of valuation, the stock costs 40.6 times trailing earnings -- which looks similar to Hershey's valuation. However, Mondelez carries $17 billion in net debt, which means its debt-adjusted market cap is $87.5 billion, and its debt-adjusted P/E is 51.5.

So here once again we have a very pricey piece of candy. My advice: Buy your Toblerone at the duty-free, and leave this stock on the shelf.

Tootsie Roll is a somewhat tastier proposition, at least as a stock. It's also a lot more than just what it sounds like, owning such brands as Junior Mints, Andes, and Blow-Pop in addition to its not-quite-chocolate marquee product. But at just $2.3 billion in market cap ($521 million in annual sales, and $68 million in annual profit), Tootsie Roll is significantly smaller than its candy rivals.

Adding to the stock's attraction, alone among the chocolate makers, Tootsie Roll sports a cash-rich balance sheet. Net of its $138 million in cash, Tootsie Roll stock's debt-adjusted market cap is 32. (Its unadjusted P/E is 34.) That's still a lot to pay, though, for a stock with only a 1% dividend yield, which has been growing its earnings at less than 9% over the past five years.

Adding to the risk, no analysts have gone on record with a growth rate projection for Tootsie Roll, so if you buy this stock, you'll have a bit less of an idea what you're getting into.

Last but not least, we come to Nestle (OTC:NSRGY), which in my opinion is the only one of these candy companies you should consider buying at today's prices. At 30 times earnings (or 31.6, debt-adjusted), Switzerland's Nestle is both the largest candy maker on Earth and also the cheapest. On top of that, Nestle's 2.8% annual dividend yield is both the sweetest in the candy industry and also superior to what any of its aforementioned rivals shell out to their shareholders.

Growth-wise, S&P Global data shows an analyst consensus that Nestle will grow earnings at about 12.8% annually over the next three to five years, with earnings rising to $4.93 per share in 2021 -- a growth rate that outclasses estimates given for any of its competitors.

Admittedly, even 12.8% earnings growth paired with a 2.8% dividend yield isn't a lot of growth to support Nestle's 30 P/E ratio. But it's better than anything else you'll find in the candy industry today.

If you just can't resist the temptation to buy a candy stock, Nestle stock may be safe enough to consume -- in moderation.