When you think about companies set to prosper from the digitization of the economy, the metal-bashing industrial sector might not be the first place you would start looking. However, dismissing the relevance of the Internet of Things (IoT) to industrial conglomerates like United Technologies (NYSE:RTX) and General Electric Company (NYSE:GE) would be a big mistake. In fact, IoT provides a huge opportunity for both companies to increase profitability. Let's see how and why. 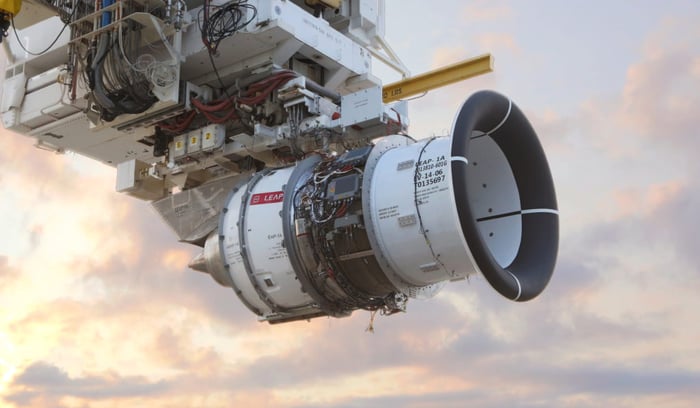 Embedding internet-abled devices into equipment and then analyzing the data they produce lies at the heart of the IoT revolution. The first, most obvious way for industrial companies to benefit is by offering customers the data and analytics produced by their equipment. It helps secure long-term services and aftermarket revenue while giving the customer the benefit of enhanced equipment performance.

The second way is through the use of IoT to cut developmental and production costs of high-ticket industrial equipment -- like GE and United Technologies aircraft engines.

The recent purchase of a predictive analytics company, Predikto, is a key indicator of United Technologies' ambitions. Its equipment (including Otis elevators; Pratt & Whitney aircraft engines; aerospace systems; and climate, controls, and security products) already produces massive amounts of data as clients use it.

The challenge is to collate the structured and unstructured data and then analyze it so United Technologies can offer better service to retain clients, while increasing aftermarket and service revenue from its installed equipment.

Predikto can forecast when equipment will need servicing, and as such, will be applicable across all United Technologies' vast array of machinery.

This digitization is a key part of the company's long-term growth path. Two examples spring to mind:

First, Otis' management is focused on winning back equipment market share (even at the expense of margin) in China in the last few years while it rolls out handheld devices (mobile phones, tables etc) to its service staff and adds remote IoT monitoring of elevators to generate more profitable long-term service and aftermarket revenue.

Second, Pratt & Whitney's geared turbofan (GTF) engine -- one of the two engine options on the Airbus A320neo -- is the key to the segment's future. The real value in aircraft engines lies not in the equipment itself, but in the long-term service agreements attached to equipment sales. Management has previously asserted that 80% of GTFs are sold under fleet-care arrangements, so adding further IoT capability (like Predikto's solutions) will enhance productivity for airlines and profitability for Pratt & Whitney.

Pratt & Whitney can also use IoT in its manufacturing to cut unit production costs on its GTF engines, for example. It's one of the arguments that former GE CEO Jeff Immelt used to justify his substantial investment in its industrial internet capability, notably with some of its large-ticket capital machinery.

Immelt argued that not only could GE offer IoT solutions to its customers, but it could also use IoT internally to improve productivity -- for example he claimed that the H-turbine (GE Power's a market leading heavy-duty gas turbine) was designed in half the time it could have taken if the company hadn't utilized the industrial internet.

Of course, GE's restructuring plans involve a substantial slimming down to focus on just aviation, power, and renewable energy, so its overall IoT aspirations have been scaled back accordingly. Moreover, GE is rumored to be planning a sale of its digital assets, as part of its ongoing restructuring.

But that doesn't mean GE can't add significant value to its ongoing operations. In fact, using IoT to focus on cutting unit production costs on its heavy-duty gas turbines and aircraft engines is one way the company can increase profits in the next few years.

It's no secret that GE Power's end markets are weak and are likely to remain so for at least a couple of years, so cutting production costs on gas turbines is important. And cutting production costs on the LEAP engine made by CFM International (a joint venture between GE and Safran Aircraft Engines) is a key profit opportunity for GE Aviation, as is enhancing its service offering for the engine.

GE might well have pressure on its earnings guidance in the near term, but using IoT to cut costs could help GE improve its equipment margin, particularly as the initially high unit production costs of relatively new products such as LEAP and the H-turbine have held back profitability at GE in the last year or so.

It's also relevant when considering that GE is set to become primarily a long-cycle business (power, aviation and renewable energy) that requires large upfront expenditures in order to develop products -- keeping costs under control, and therefore maintaining cash flow is critical.

In the near term, United Technologies investors are probably more focused on whether or not the company will break up, and how the integration of Rockwell Collins will pan out. Over the longer term, IoT would be a key part of the investment case for an independent Otis and an aerospace company -- both formed out of a potential United Technologies breakup.

For GE, IoT offers an opportunity to improve aviation and power segment margins -- particularly as gas turbine equipment sales are likely to remain weak in the near future. Exceeding expectations with cost-cutting is one way GE can start to regain investors' confidence.