General Electric Company's (NYSE:GE) upcoming earnings report is probably the most critical one in the company's history. The stock price rise since Larry Culp's appointment as CEO has created a sense of optimism that GE is about to be set on the right path to recovery, and the report and commentary around it will be the first chance for investors to assess the new regime and the task ahead.

In this context, let's look at a checklist of key things to focus on when GE reports its third-quarter earnings on Oct. 30.

1. The hit from GE Power due to the blade turbine issue

GE's management has already prewarned investors that the company won't meet its previous guidance for earnings per share of $1.00 to $1.07 and free cash flow (FCF) of around $6 billion in 2018, due to weaker-than-expected performance by GE Power. However, it's not clear if this is a one-off financial hit due to an issue on its HA gas turbine, or if it's also attributable to deteriorating conditions at GE Power overall.

At the time the turbine blade issue was disclosed, the CEO of GE Power, Russell Stokes, claimed that a fix had been identified and GE was working with operators to address the issue. Investors will be looking for assurances that it is indeed an isolated issue, and that the only impact will be a one-time hit to power earnings as it gets resolved. 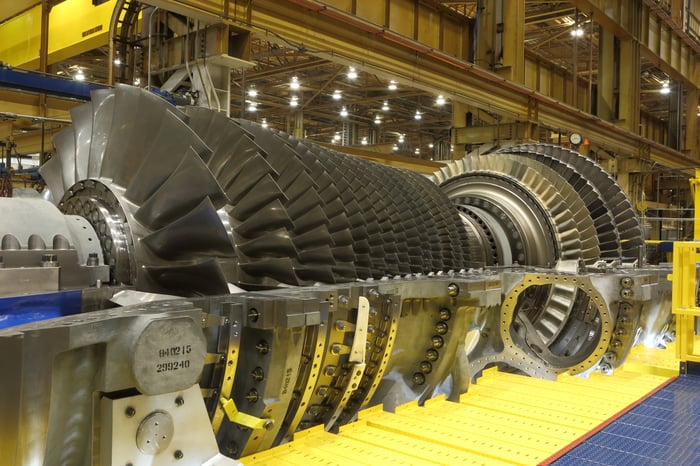 Even before the blade issue hit, it seemed unlikely that GE would meet its 2018 guidance due to a deteriorating outlook in GE Power. The implied expectation for GE Power margin improvement in the second half looked optimistic, particularly as key rival Siemens was busy lowering expectations for its power segment margin.

That said, GE does have an opportunity to improve Power's margin -- by cutting costs and improving transactional services and equipment margins -- and investors will be looking for evidence of improvement.

On this note, Culp needs to be very clear on the following:

Management's guidance for the aviation segment implies segment profit somewhere in the range of $6 billion to $6.25 billion, but there are a lot of moving parts to the segment's performance which need to be looked at closely.

Given the strength in aviation aftermarket sales in 2018, it's reasonable to expect another strong performance from GE Aviation spares sales. However, the key issue is likely to be the impact of LEAP aircraft engine shipments in the quarter.

Anecdotal evidence suggests GE will fall short of its production target in the quarter, so paradoxically, segment margin might get a boost in the third quarter. However, this could reverse dramatically as GE ramps up production.

Investors need to look closely at aviation margin guidance, and particularly for commentary on the impact of LEAP production.

It's easy to forget the renewable energy segment: After all, it only produced 4.8% of industrial segment profits in 2017. But it's one of the three segments set to remain as part of the company's existing plans.

Unfortunately, there's pricing pressure in the wind-energy market. While CFO Jamie Miller reaffirmed 2018 organic revenue guidance (for growth of 7% to 10%) on the second-quarter earnings call, she did not explicitly reaffirm earnings guidance.

Investors will be looking for an affirmation of earnings guidance and some commentary on pricing conditions overall, particularly with demand set to shift to different geographic end markets in the coming years.

Don't be surprised if Culp cuts the dividend. Management has already said it won't hit its guidance for $6 billion in FCF in 2018. Meanwhile, the company is currently funding its pension deficit to the tune of around $2 billion, and interest rates are rising -- not good news for highly indebted companies like GE.

Throw in the fact that the current dividend requires some $4.2 billion in cash, and it makes sense to cut it. That might hurt investors in the short term, but it's worth noting that former CEO John Flannery's plan outlined in June -- which involved maintaining the dividend to the date when GE Healthcare would be separate -- did very little for the stock price.

Culp probably won't outline any major strategic changes on the earnings call, but analysts will surely ask about the subject. Flannery's plan involved creating a stand-alone healthcare company and rewarding investors by distributing 80% of the new company to stockholders. Meanwhile, the existing stake in Baker Hughes, a GE Company will be separated in two to three years. The overarching plan was to reduce the company's debt-to-earnings ratio in line with what rating agents expect by 2020, and reward investors by being generous with the healthcare distribution.

Unfortunately, the plan did little to convince the market. Investors are entitled to ask why they should believe in the company's 2020 plans if they don't trust the 2018 guidance.

Given GE's stock price rise since Culp's appointment, it stands to reason that the market is expecting him to make significant changes to the existing plan; any color regarding them will be closely followed.

The bullish case for GE has long centered around the idea that 2018 would mark a trough in earnings and FCF, with 2019 seeing an improvement based on a combination of corporate cost-cutting, growth in revenue, earnings in aviation and healthcare, and an increase in Power margin.

While Culp is unlikely to give specific guidance on the matter, investors will be looking out for commentary that confirms that this is achievable, particularly regarding the FCF run rate.

All told, the optimism around Culp is probably due to confidence in his proven track record of execution, and a belief that he will change the company's current strategic plan, rather than purely a hope that he will execute Flannery's plan in a better manner.

Culp's track record at Danaher suggests he's the right man for the job, and his opportunity to restore GE to its former glory starts in the upcoming earnings presentation. A combination of reassurance in the strength of the underlying business (the first four points above) and change of strategic focus (the last three points) is what's needed now.

GE's Next Earnings Report Will Be Crucial: 7 Things to Look Out For @themotleyfool #stocks $GE $SIEGY $DHR $BKR Next Article
Current