Leading entertainment providers have historically brought excellent returns for investors. As the economy grows and incomes rise over time, consumers tend to spend more on entertainment. This means that investors can rely on top media companies to sustain them in those inevitable periods of economic weakness and continue growing when the economy recovers. 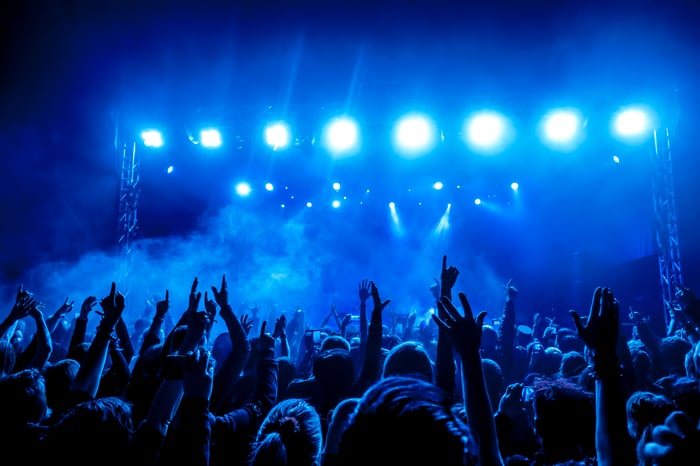 Concert spending is on the rise

The music industry is currently doing very well. Streaming services like Apple Music and Spotify Technology provide growing revenue streams for the big music labels after years of suffering declines in physical sales and losing billions from piracy. The music business is expected to double in size to $131 billion by 2030, according to Goldman Sachs. One crucial piece of that economic pie is spending on live events, which is expected to increase by 46% to $38 billion.

Last year, Live Nation put on 34,996 events worldwide. The beautiful thing about the business is that it not only has relationships with 4,500 artists, including big names like Beyonce, Justin Timberlake, and U2, but it also has its claws in every link of the value chain.

Live Nation sets up the shows and then sells the tickets through Ticketmaster, which it acquired by way of a merger in 2010. Thousands of events each year bring in substantial revenue streams from concessions, parking, and merchandise. Revenue from concerts totaled $8.8 billion in 2018 and made up 81% of Live Nation's top line, while revenue from ticket sales made up 14% of the total, or $1.5 billion.

Live Nation is in business to connect over 570 million fans around the world with their favorite artists. That provides a lucrative opportunity to sell advertising and sponsorships at its events, too. Last year, advertising revenue made up the smallest slice of the top line at just $504 million, but ad revenue generates very high margins, so it contributed 38% to non-GAAP (adjusted) operating income.

Over the last three years, the total number of events the company has produced increased by 33%, which has driven a proportional increase in revenue and adjusted profit. The stock has soared 166% over that period and trades at a price-to-free-cash-flow multiple of 37. It's not cheap by any measure, but there are still plenty of opportunities for the company to grow.

Management is focused on increasing the fan base, selling more tickets, and raising its advertising revenue. To accomplish this, Live Nation continues to score deals with market-leading brands, and management is investing to enhance its online streaming capabilities. 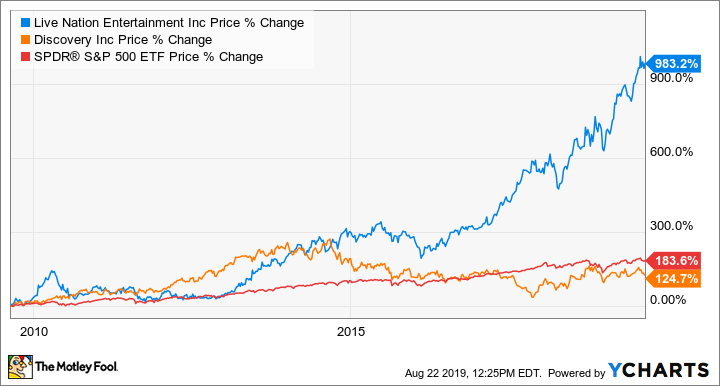 TV is far from dead

Despite the rapid growth in streaming services, Discovery is enjoying strong viewership trends and advertising growth across its core TV networks. Throw in an ultracheap valuation, and investors could be looking at a real bargain.

Discovery is the leader in market share among women ages 25 to 54 across all television. Its compelling slate of networks includes the namesake Discovery Channel, Animal Planet, TLC, as well as the new additions of HGTV, Travel Channel, and Food Network, which were brought along with the acquisition of Scripps Networks. Discovery has also done well striking deals to broadcast major sporting events, like the PGA Tour and -- through its Eurosport network -- the Olympic Games, Grand Slam Tennis, and the Tour de France.

All this content has drawn the longest viewing time and engagement of any audience on television. This helped drive a strong second quarter for Discovery, with growth in domestic advertising revenue of 6% year over year, and a 5% increase in international markets. The company is enjoying growth in its global audience across all key regions, and it also has a strong presence digitally, with its GO apps. It recently announced it was launching nine additional channels on YouTube TV, which shows how management is already positioning its content for the future.

Discovery's worldwide reach and strong digital presence should allow it to withstand fluctuations in the domestic ad market and remain a relevant entertainment provider as the media industry continues to evolve. The stock is very cheap, trading at a forward P/E of just 6.9 times next year's earnings estimate.