The price of silver has climbed more than 19% so far this year, more than recovering from its 9% fall in 2018. Many investors with an interest in precious metals, consequently, are wondering if it's still a good time to pick up shares of silver stocks like First Majestic Silver (NYSE:AG), or if that ship has sailed for the time being. That's not a misguided concern,  considering First Majestic Silver's stock has skyrocketed more than 78% year to date. But mining silver isn't the only way in which this company profits -- it's also involved in the production of gold and base metals.

While the recent movements in the stock and commodity can provide some intimations about what's to come, savvy investors know that there are many other factors to consider before buying a stock.

With that in mind, let's take a wider look at the bull and bear cases for First Majestic Silver. 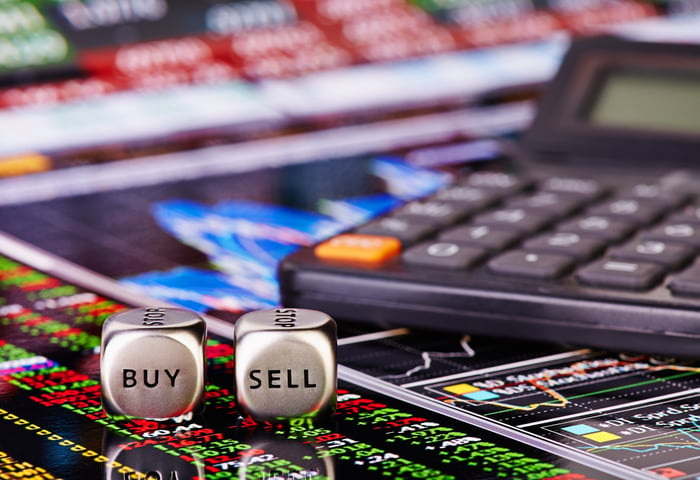 The positive perspective on this precious metals miner

Thanks to the addition of the San Dimas gold and silver mine in Durango, Mexico, to its portfolio -- acquired when it bought Primero Mining in May 2018 -- First Majestic Silver delivered record production last year of 22.2 million silver equivalent ounces. According to a recent investor presentation, that record may not stand for long; the current forecast range for 2019's silver equivalent production is 24.4 million ounces to 26 million ounces. While the company hasn't provided guidance for the years ahead, the fact that the company expanded its mineral reserves from 120 million ounces of silver-equivalent to 170 million ounces at the end of 2018 suggests that it may have many glittering opportunities for its shovels in the years to come.

Looking at the company's financials, bulls will point to its recent improvements in generating operational cash flow. Whereas its cash flow had ebbed from 2016 to 2018, the company's performance over the past three quarters suggests that 2019 may deliver notable turnaround (assuming the fourth quarter's results are in line with the previous ones). 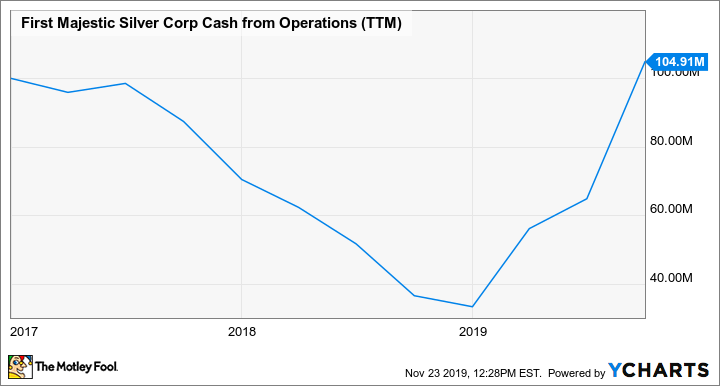 Eschewing a conventional ball mill for a high-intensity grinding (HIG) mill, First Majestic has improved silver and gold recoveries at its Santa Elena mine, which has contributed to the rise in cash flow. Moreover, the company plans to install HIG mills at its La Encantada and San Dimas mines as well, which could push cash flow still higher.

Some see no silver lining to these clouds

Despite First Majestic's recent achievements in increasing its mineral production and cash flow, skeptics will point to its lackluster income statements. In 2018, for example, the company reported an EBITDA loss of $158 million, according to Morningstar. Taking into account the depressed price of silver last year, some investors may not be as concerned with its lack of profitability then. However, the price of silver has rebounded, yet First Majestic continues to report EBITDA losses -- to the tune of $90 million on a trailing-12-month basis, in fact. These figures look even more alarming in light of how its silver-centric peers, Hecla Mining (NYSE:HL) and Pan American Silver (NASDAQ:PAAS) have performed. 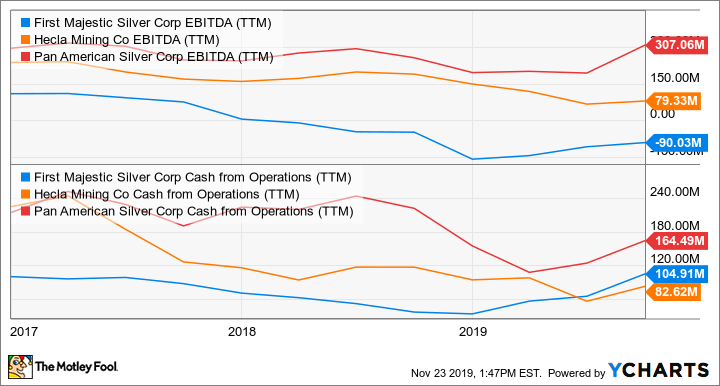 Like First Majestic, Hecla Mining and Pan American Silver have also grown operational cash flow recently. However, unlike First Majestic, they've also delivered positive EBITDA results in conjunction with the rising price of silver. Primarily, the contrasting performances of the companies stems from the differing amounts of stock-based compensation. 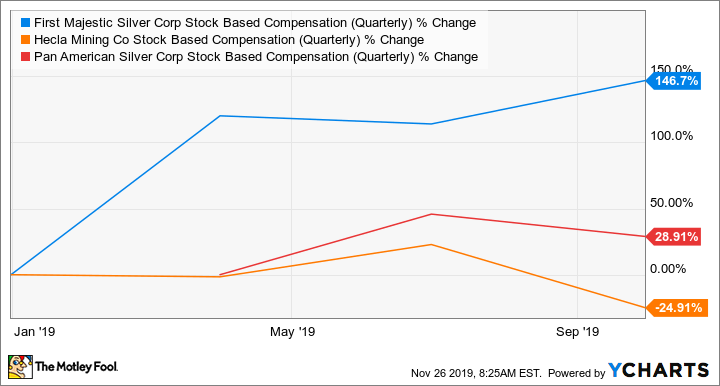 First Majestic, for example, has reported a significant increase in stock-based compensation in 2019, while Pan American Silver has seen a modest increase; Hecla Mining, on the other hand, has seen this decline 25% year to date.

Another downside to First Majestic as an investment is the fact that it doesn't pay shareholders a dividend. Although Hecla Mining and Pan American Silver currently offer meager yields of 0.43% and 0.76%, respectively, that's better than nothing. Income-focused investors who are seeking exposure to silver, moreover, could also consider the stock of royalty and streaming company Wheaton Precious Metals, which offers dividend currently yielding 1.3%.

Lastly, First Majestic may have some growth prospects on the horizon, but they hardly seem compelling enough to justify the stock's rich valuation. Currently, shares are trading at nearly 6 times sales and 19.9 times operating cash flow, representing premiums to its five-year average sales and operating cash flow multiples of 3.9 and 16.7, respectively.

The final word on First Majestic

Although now doesn't seem to be the best time to buy First Majestic shares, that's not to say that such a time will never come. In the months ahead, investors should keep an eye on the results of its exploration of Los Hernandez to see if it significantly increases the company's mineral reserves, which would ensure the company has organic growth opportunities. And in the coming quarters, it will be interesting to see if the company can achieve the same turnaround on EBITDA that it achieved with its cash flow. If it does, a reevaluation of the stock will certainly be warranted.