If you're like me, it takes a few days at work for your brain to switch out of "holiday mode" once the new year rolls around. You might have the same problem as an investor: the holiday shopping season, followed by the Consumer Electronics Show, is packed with the latest gadgets from various tech companies. It's not surprising that other sectors can get lost in the shuffle.

In particular, boring industrial and manufacturing stocks are easy to ignore in January. But three top industrials that investors may want to pay a bit of attention to this month include Ford (NYSE:F), Oshkosh Corporation (NYSE:OSK), and General Electric (NYSE:GE). Here's why you should take a look at them right now. 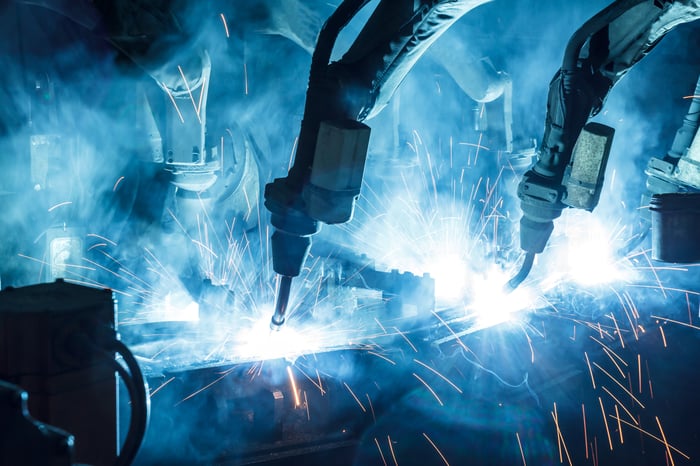 It's no stretch to say that automaker Ford's performance over the last five years has been, well, terrible. While rival Fiat Chrysler has seen its stock go up, and General Motors' (NYSE:GM) stock has at least held steady, shares of Ford -- the only one of the Detroit Big Three to avoid bankruptcy during the Great Recession -- have fallen by 36.9% in the last half decade.

So, why on earth should you even keep Ford on your watchlist, let alone buy it? Because change may (finally) be on the horizon. CEO Jim Hackett is presiding over something of a company reboot, and there are signs that the company's new offerings are poised for success.

A new F-150 redesign looks set to launch later this year, which should put Ford's pickup sales back on track. Van sales, including commercial fleet sales, which Hackett has identified as a priority category, were up, as were sales of the Ford Expedition (redesigned two years ago). The Lincoln Aviator and Corsair crossovers (introduced in 2019) sold well. Additionally, reservations have been pouring in for the Mach E all-electric crossover SUV -- so many, in fact, that the First Edition version is now sold out.

An investment in Ford today is partly a bet on Hackett's vision for the company's future, a vision to which consumers seem to be responding. But it's also a chance to nab a 6.5% dividend yield that will reward you for buying in as that vision plays out. Don't forget about Ford this year.

Shrugging off the headwinds

Unlike Ford's, the stock of specialty truckmaker Oshkosh Corporation had an excellent 2019, rising 54.4%. Shares of the Wisconsin-based manufacturer of fire trucks, construction equipment, and military vehicles are currently near their all-time high.

Fueling this rise were back-to-back earnings reports that highlighted the strengths of Oshkosh, which has managed to shrug off concerns about how steel tariffs and trade wars might affect its operations. An increase in global air travel has boosted sales of the company's airport safety vehicles. Its existing multi-year contract with the U.S. military to provide more than 16,000 Light Combat Tactical All-Terrain Vehicles (L-ATVs), secured in 2013, continues to provide steady revenue; additional countries have also shown an interest in L-ATV purchases.

Even as Oshkosh's share price has risen to a near-record level, though, its valuation has remained low. The company's current price-to-earnings ratio of 11.5 is its lowest in eight years. Oshkosh should report earnings at the end of the month; investors should keep an eye on this American success story to see if it can keep the good times rolling. 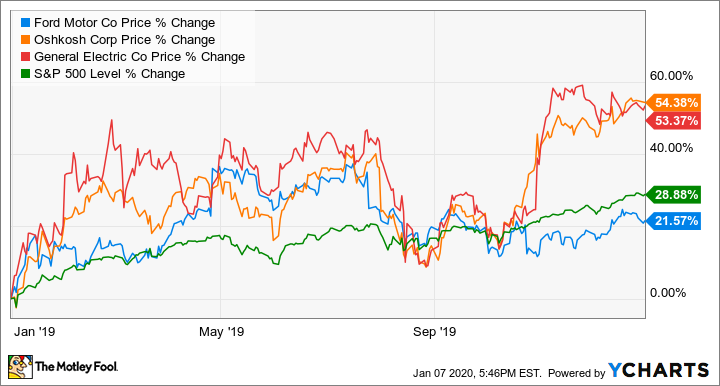 Oshkosh and General Electric outperformed in 2019 while Ford lagged the market. F data by YCharts.

Industrial conglomerate General Electric is in a similar situation to both Ford and Oshkosh. Like Ford, it's been a long-term underperformer, shedding 47.9% of its value over the last five years. But like Oshkosh, its stock (eventually) had a stellar 2019, rocketing up 53.4%, just a percentage point lower than Oshkosh's.

Of course, this could be just wishful thinking on the part of the stock market. While CEO Larry Culp has done a good job of managing the troubled company, weakness in the company's key power division persists, and General Electric's balance sheet -- while not the total disaster it was in past years -- is still loaded up with debt and some other unexplained liabilities.

However, after what Culp described as a "reset year" in 2019, the new year may bring better news for GE. The sale of its biopharma business to Culp's former employer Danaher will give a much-needed influx of cash, and the arrival of new CFO Carolina Dybeck Happe -- a seasoned CFO who oversaw net income and cash flow growth combined with debt reduction during her recent (albeit brief) tenure at Maersk -- will hopefully clear up some of the persistent problems and mysteries with the company's finances. If nothing else, Dybeck Happe is another executive from outside the company who isn't associated with GE's past financial transparency problems.

Thanks to the continuing questions surrounding the company's power business -- not to mention its lousy 0.33% dividend yield -- jumping in now might be premature, but so far Culp has delivered on his projections, and he's been projecting better performance starting this year. With Dybeck Happe on board, GE is certainly a company to watch this month.

Great investments can be anywhere

Just because a company isn't exciting or cutting-edge doesn't mean it can't make a rewarding addition to your portfolio. Likewise, companies that have stumbled in the past can make compelling investments if they're ripe for a turnaround. Ford, Oshkosh, and General Electric may all fall into that category.

However, you should be aware that all three of these companies have the potential to underperform in 2020 as well. That's why you should add them to your watchlist now, and be ready to buy when the time is right.