The U.S. consumer market remains strong early in 2020, but e-commerce continues to reshape the retail world, and investors need to be cognizant of the fact that the current run of record economic expansion won't last forever. However, that doesn't mean giving up on the brick-and-mortar space altogether. It might seem counterintuitive, but high-quality retailers can actually be great vehicles for stock gains in a volatile market -- you just have to be selective with your choices.

The companies with the advantages needed to thrive in the new world of retail may actually be able to consolidate their share of the market and deliver great returns for shareholders. For investors looking for dividend-paying retail plays that can keep beating the market and help pad an investor's portfolio, The TJX Companies (NYSE:TJX), Walmart (NYSE:WMT), and Costco (NASDAQ:COST) stand out as the best buys in 2020. 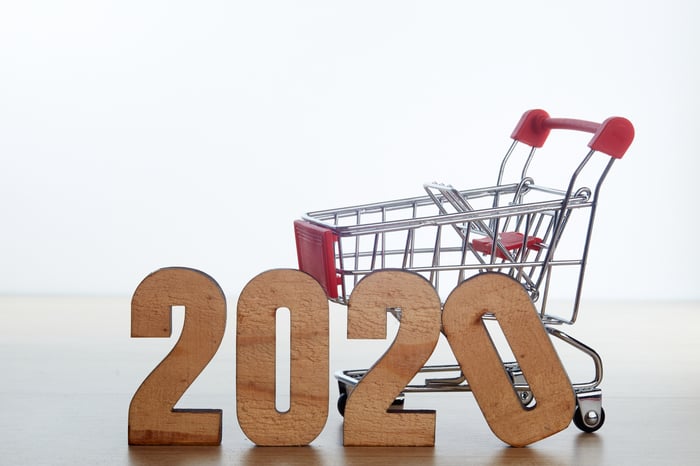 The narrative in the retail space has been dominated by the effect of e-commerce, but that doesn't mean that there aren't brick-and-mortar-focused chains posting great results. The TJX Companies is a standout example in that mold. The off-price retail conglomerate operates bargain-focused chains, including TJ Maxx, Marshalls, HomeGoods, and HomeSense. It posted an impressive 4% growth for same-store sales last quarter -- along with 7% growth for revenue and 8% growth for non-GAAP (adjusted) earnings per share.

Just in case you're worried that this e-commerce-defying performance stemmed from a favorable comparison distorting the picture, the company posted 6% same-store sales growth in fiscal 2018, 2% growth in 2017, and 5% in 2016. In fact, the company's same-store sales have declined only once in its 44-year history.

Take a look at the dividend-adjusted total return for TJX Companies across the three-year period starting at the beginning of the 2008-09 Great Recession: 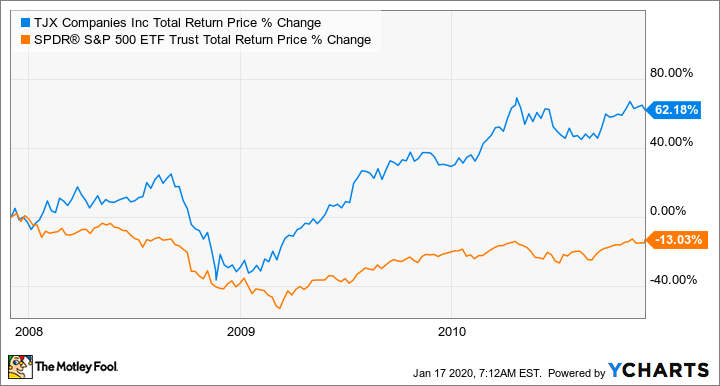 The company continued to expand its retail square footage during the worst of the Great Recession, and it dramatically outperformed the vast majority of other players in the retail category. Same-store sales climbed 1% in 2008, 6% in 2009, and 4% in 2010 -- with total revenue up 4%, 7%, and 8%, respectively, across the corresponding periods. People aim to spend less during a recession, but they'll still need clothes and home furnishings, and many shoppers will still be looking for name brands or otherwise high-quality offerings -- even if they're more price-conscious.

TJX's dividend yield comes in at roughly 1.5%, and the company has boosted its payout on an annual basis for 23 years running. The company's shares trade at roughly 24 times this year's expected earnings and offer an appealing combination of dividend-growth and capital-appreciation potential.

Walmart is a retail giant that thrives on scale and its ability to offer prices on a huge range of goods that competitors find very difficult to beat. The company has a 46-year streak of annual payout growth, the dividend on its shares yield roughly 1.8% at current prices, and its budget-focused business makes it a consumer favorite in times thick and thin.

The table below tracks Walmart's sales and earnings performance in the four fiscal years spanning from Jan. 31, 2008, through Jan. 31, 2011:

Across that four-year period, Walmart delivered a dividend-adjusted total return of roughly 17.5%, while the total return for the SPDR S&P 500 ETF had just reached a break-even point following the market crash in 2008 and post-Great Recession economic malaise. The business will likely prove similarly sturdy whenever the next downturn hits.

Whether you're shopping for groceries, clothing, home-improvement items, or car maintenance supplies, Walmart's all-in-one approach has you covered and gives it a huge edge in the retail space. The company also offers auto maintenance services and in-store financial services like check-cashing, and it's looking to further expand on these draws by offering health services, including dental care and hearing and vision tests.

Having people's shopping needs concentrated in a single place creates a huge bulwark against the threat of e-commerce squeezing its brick-and-mortar retail locations, but Walmart has also been ramping up its own online-retail offerings. The company managed to grow its e-commerce sales 41% year over year last quarter, and same-store sales still grew by 3.2%. With a rock-solid business and a great dividend-growth history, Walmart is a standout play in retail.

With online retail continuing to gain ground and offer shoppers increased convenience and faster delivery options, it's clear that companies with a heavy brick-and-mortar imprint need strong hooks centered around providing value consumers aren't getting elsewhere. Bulk-retail giant Costco is another company that has the benefit of a fantastic moat and a model that will allow it to stand up to the pressures of e-commerce and tougher economic times.

If the record period of uninterrupted U.S. economic expansion continues, that's all the better for Costco. If not, the company's bargain-focused offerings and membership-driven business model position it to continue putting up solid performance. Take a look at the stock's total return performance following the last economic downturn: 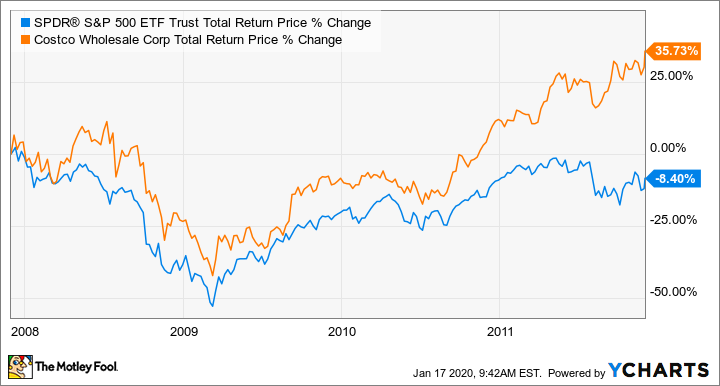 It shouldn't come as a shock that the warehouse-retail company performed well as purse strings tightened. Costco customers pay an annual membership fee in order to be able to shop at its warehouse stores and take advantage of the big savings that can be had by buying goods in bulk. The numbers over the last decade prove that customers love the deals and the experience of shopping at its stores.

Nearly 91% of store members in the North American market renewed their Costco subscriptions in the first quarter of the current fiscal year, and the company's same-store sales grew 5% in the quarter and a whopping 9% in the last fiscal year. Like Walmart, the bulk-focused retailer allows shoppers to take advantage of finding a huge section of their shopping needs all in one location. Costco has also had tremendous success building its in-house (and higher margin) Kirkland brand, which spans everything from food to furniture and clothing.

While the company's forward price-to-earnings multiple of roughly 35 might look lofty at first glance, this is a business that's built for resilience and long-term growth. Costco shares sport a 0.9% dividend yield, and the company has raised its payout for 15 years straight.