The coronavirus outbreak presented obvious challenges, but the telecom powerhouse also whiffed where it should have done well.

Like most companies, AT&T (T -0.89%) was adversely affected by the COVID-19 pandemic during the second quarter. Shutdowns intended to curb the spread of the disease not only made it difficult to do business with consumers; procuring the supplies, equipment, and staff needed to deliver business-minded services was tough too. Investors more or less knew this would be the case.

AT&T's second-quarter numbers, however, were even weak in areas where they should have been decent. That's television, internet, and consumer wireless. With millions of people effectively trapped at home, video entertainment has never been more marketable. Likewise, with millions of employees now working at home, reliable broadband service has never been more crucial. And cellphones? There's nothing about the coronavirus outbreak that should crimp usage of them.

Perhaps the company's struggles go beyond the COVID-19 headwind. 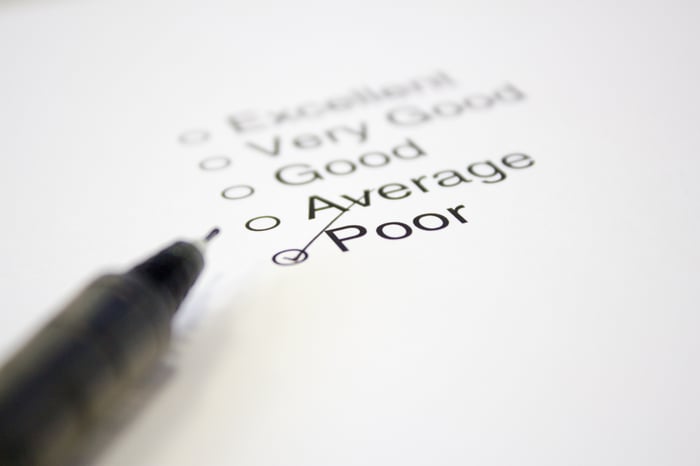 As could have been expected, AT&T's WarnerMedia arm struggled during the three-month stretch ending last month. With movie theaters largely closed the entire time -- here and abroad -- its film business was mostly mothballed. The animated Scoob! flick was a successful direct-to-consumer (streaming) release, but there's only so much a studio can do to offset the unexpected closure of movie houses.

Except WarnerMedia's soft spot wasn't exactly Warner Brothers films. Its Home Box Office (HBO) arm saw a 5% tumble in revenue, while its Turner division's top line slumped 12%. A loss of advertising business made up a big piece of that setback, but not all of it, and certainly not for HBO's top line. That division is linked to cable subscriptions, and should have been augmented by the late May launch of HBO Max. Cord cutting continues to be a headache.

That said, AT&T looks to be last quarter's biggest victim of the cord-cutting movement. Between DirecTV, U-Verse cable, and streaming options including AT&T TV, the company shed (on a net basis) 954,000 paying customers. Video entertainment revenue fell 12%, from $8 billion in the same quarter a year earlier to just under $7 billion last quarter.

It's remarkable simply because people have never consumed more television media in their lives than they have in recent months. They just watched much less TV supplied by AT&T.

The telco giant's broadband service suffered last quarter too, at a time when high-speed internet was a critical lifeline to the outside world. The loss of 102,000 broadband users led to a slight dip in revenue, though in its defense, 159,000 AT&T broadband customers were technically considered canceled even though they're still receiving service. AT&T's commitment to keep subscribers directly affected by COVID-19 connected to the web kept them online. Both businesses could have taken more significant revenue hits had AT&T not managed to impose higher prices on their paying customers.

Even its wireless service showed odd weakness during Q2, given the circumstances. While its total number of connected devices serviced grew to an impressive 171.4 million, its total number of actual postpaid customers slipped from 75.5 million as of the second quarter of 2019 to 74.9 million last quarter. That was also lower than the 75.1 million postpaid customers AT&T served as of the end of Q1. Prepaid customer growth didn't offset that attrition, and shrinking per-user revenue translated into a slight lull in mobility revenue. And again, that's at a time when coronavirus lockdowns made it difficult to shop for an alternative service provider. Enough consumers found a way.

Here's how revenue for each of the company's key units broke down last quarter, with a comparison to the second quarter of 2019 and first quarter of 2020.

Perhaps most alarming of all is that the highly anticipated HBO Max was touted as a way to make some of AT&T's phone plans and cable plans stickier by including free access to the service, even if only for a limited time. Consumers didn't seem to nibble. The company says 4.1 million subscribers were signed up for HBO Max a month after its May 27 launch, which is impressive... sort of. Only 3 million were retail subscribers. The other 1.1 million (give or take) were considered wholesale subscribers who already had another AT&T service. For perspective, IMA Research estimated that Walt Disney's (DIS 0.85%) Disney+ streaming service had 15 million subscribers within its first five days. Many were taking a free test drive of Disney+, but most seemed to sign up. Disney reported in early February that by the time its first fiscal quarter ended in December -- about a month after it launched -- Disney+ had 26.5 million paying customers. And unlike AT&T, Walt Disney didn't have to bundle that service with another to make it more marketable, either.

The crux of the problem

AT&T's business-oriented services get a pass. Warner's film business gets something of a pass too, as the premium-on-demand movie business is something still relatively new for everyone; nobody could have foreseen the mass shuttering of movie theaters. But its television, broadband, and consumer wireless arms should have at least held their ground last quarter. They couldn't even do that, raising one overarching question: What went wrong?

The company may be facing more than one stumbling block. But I'll reprise the two biggest ones I've mentioned before. One of them is pricing, of its video services in particular. The other is packaging, or the way its TV services are bundled with other AT&T services. Many AT&T customers already qualify for free access to HBO Max and don't know it, while newcomers are confused about how to get a deal on it.

The price and bundling premise, however, applies to the company's non-television products too -- namely, wireless and broadband. AT&T's services aren't bad, but customers are clearly finding something more compelling. Price and perceived value may be the big factors. Don't be surprised to see more of the same kind of poor results until AT&T simplifies its bundling, and ultimately makes its products more affordable in the way consumers actually want to buy them.