Please ensure Javascript is enabled for purposes of website accessibility
Log In Help Join The Motley Fool
Free Article Join Over 1 Million Premium Members And Get More In-Depth Stock Guidance and Research
By James Brumley – Aug 17, 2020 at 11:00AM

Smaller, less-mainstream video content creators are finding the cable industry just doesn't need them like it used to.

Early this month, cable TV content company AMC Networks (AMCX -0.23%) filed an official complaint against cable and media name AT&T (T -1.42%) with the FCC. AMC argues that AT&T isn't offering an equitable amount of money for access to its programs, and is simultaneously favoring its own products like HBO Max and its own stations such as TNT in violation of the agreement AT&T made when it was allowed to acquire Warner Media.

The market mostly ignored the news; carriage rate disputes are nothing new in the television industry. This is a complaint investors would be wise to take note of, however, as it's a microcosm of a battle that's been brewing for a while. This is the year it will come to a head, and force a handful of companies like AMC and Discovery (DISC.A) (DISC.B) (DISCK) to start making some bold but tough decisions. 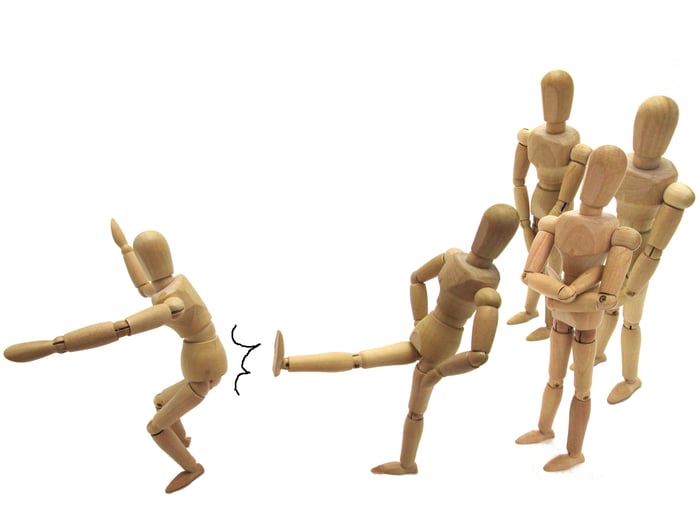 "Vertical" is the key word

Whether or not the complaint from AMC -- owner of channels like AMC, BBC America, WE, IFC, Sundance Now, Shudder, and Acorn TV -- is legitimate remains up to the FCC. AT&T says it isn't, of course, explaining: "The cost to provide AMC Networks' programming to our customers should reflect that AMC Networks' shows have been declining in popularity as compared to their peers for several years."

Of course, even if not intentional or measurable, it would be naive to believe AT&T isn't giving its relatively new streaming product HBO Max every advantage it can.

There was a term used in AMC's complaint, however, that cuts straight to the heart of a matter that's far bigger than AT&T and AMC. The document explains that AT&T could be trying to "stifle AMC's ability to compete fairly by using its colossal market power as a vertically integrated MVPD to disadvantage AMCN's linear networks, AMC and AMC+, in favor of AT&T's own affiliated networks."

By "vertically integrated," AMC simply means AT&T not only controls the means of distribution of television programming to its DirecTV, AT&T TV, and U-Verse cable customers but also owns content delivered through its proverbial pipes. It's a potential conflict of interest.

AT&T is hardly the only name in the business to serve as the medium and the media, however.

Merger-mania blurs all the lines

Cable giant Comcast (CMCSA -1.94%) got the vertical integration ball rolling in earnest in 2011 when it acquired TV network NBC, which was already united with movie studio Universal. But other players have followed suit.

Take Liberty Global and Liberty Broadband mega-shareholder John Malone, for instance. He's not only a huge stakeholder of the aforementioned Discovery, but he owns a piece of cable name Charter Communications (CHTR -3.68%) and Sirius XM. Merging Viacom and CBS into ViacomCBS (PARA -3.35%) (PARA.A -2.78%) last year paired a network with a major TV production brand.

Non-cable verticals in the industry have since been brought to the market by technology. Walt Disney (DIS -2.60%), as an example, doesn't own a cable service provider, but it does own ESPN, ABC, several Fox-branded assets, and one of the most powerful movie studios in the business. And, with the advent of streaming platforms Disney+ and Hulu, it's got a means of distributing its entertainment in a way that bypasses cable television. That's an incredible amount of leverage.

The creation of Disney+ and NBCUniversal's streaming brand Peacock also sparked a wave of other vertical integrations within the video business. In April, Fox Corp. (FOX -1.41%) (FOXA -1.25%) announced the completion of its acquisition of ad-supported streaming name Tubi. ViacomCBS is now the owner of ad-supported video-streamer Pluto TV, augmenting its subscription-based CBS All Access. Those deals give Fox and ViacomCBS ways of monetizing entertainment video completely outside of linear cable.

All of those vertical deals among cable names, studios, and streaming platforms open the door to favoritism of that company's own assets, even if none are saying as much.

In short, the pricing dispute between AT&T and AMC is nothing new. The industry has produced plenty of them in the past.

What is new for 2020 is the sheer number of verticals established or firmed up in just a matter of months. The two biggest cable companies serving the United States, AT&T and Comcast, both now make and sell video content for movie screens as well as TV screens, in addition to streaming services. Smaller players like ViacomCBS and Disney are walling up in their own way, with streaming products that leverage existing movie and television content. Neither company is adding third-party content to its streaming services, a la Netflix. A stand-alone ESPN may well be in the cards.

It's a paradigm shift that raises questions for the future of still-independent production houses like AMC Networks, and to a lesser degree, Discovery and its channels like HGTV, Animal Planet, and the Travel Channel. Discovery doesn't appear to have a great deal of distribution leverage with John Malone and Charter, and AMC Networks has no vertical powerhouse looking out for it. Perhaps worse, a recent TiVo report suggests television biographies, documentaries, and cooking are considerably less watched than news, comedy, drama, and action content. That means these less-than-mainstream channel brands are losing what little leverage they had before.

Something's got to give, one way or another, and sooner rather than later. The streaming plans from Discovery and AMC Networks are encouraging, but not enough.