Shares of AMC Entertainment (NYSE:AMC), the world's largest movie theater chain, jumped last month as the stock got a huge boost from positive vaccine developments, most notably from Pfizer in partnership with BioNTech, which was the first team to announce a successful phase 3 vaccine trial.

That news helped AMC stock overcome another dismal earnings report and an earlier warning that it could run out of cash by the end of the year. Shares finished the month up 81%, according to data from S&P Global Market Intelligence. The chart below shows the majority of those gains came on Nov. 9 after the Pfizer news came out. 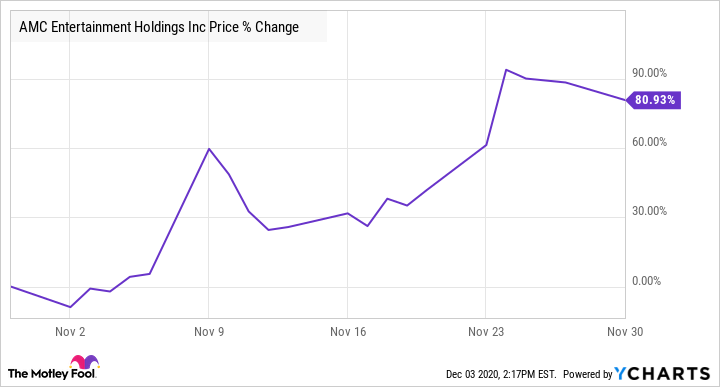 AMC's shares fell sharply on the first day of trading in November as it filed to sell 20 million additional shares, but the stock recovered those losses the following day after its third-quarter earnings report. Though it was another dismal quarter with revenue falling 91% and a free cash flow loss of $385 million, investors still seemed to find some good news in the report, including that the company had reopened 90% of its domestic theaters.

However, the real news that drove the stock came out the following week as Pfizer said its coronavirus vaccine had an efficacy rate above 90% -- much better than expected. That news gave a jolt to "recovery stocks" like AMC, as movie theaters have been hammered by the pandemic, and the stock finished that session up 51% after gaining nearly 80% earlier in the day.

The following week, similar vaccine news from Moderna lifted the stock, and finally, AMC jumped again in the last week after rival Cineworld secured $750 million in financing to help it survive the pandemic.

The promise of a vaccine gives investors some reason to be hopeful about AMC, but the stock still faces a cash crunch as well as share dilution after proposing to sell 200 million additional shares today. Over the longer term, the movie theater industry also must contend with competition from streaming channels. Warner Bros., for example, just announced it would release all movies next year simultaneously in theaters and on HBOMax. Between those challenges and the pandemic, it's hard to find a good outcome for AMC.