With the introduction of the first Apple (NASDAQ:AAPL) 5G iPhone this fall, and telecom operators touting the benefits of their new high-speed services, 5G has become a technology buzzword as the calendar flips from 2020 to 2021.

In response, many 5G-reated stocks have surged mightily this year, as enthusiasm over the 5G transition took hold. Yet 5G will be a 10-year-long trend, and certain companies are primed to benefit not just in 2020, but for years, thanks to the new technology upgrade.

Here are three growth stocks with the right business models to be long-term winners in the 5G space, each of which still looks like a solid value today. 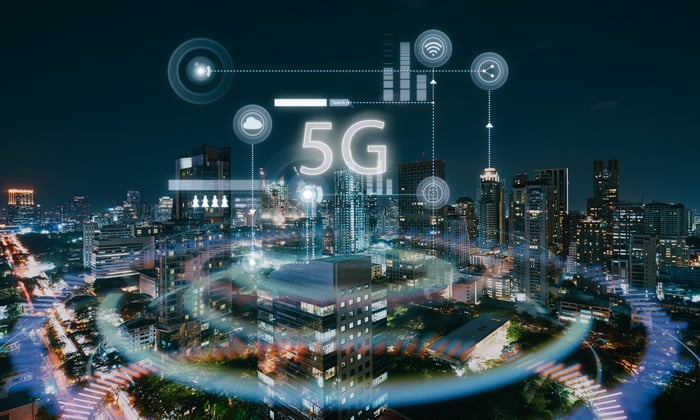 It's not often that a low-growth, stodgy telecom stock makes market-trouncing gains. Yet that's just what T-Mobile (NASDAQ:TMUS) has pulled off in 2020, up 66.5% on the year. 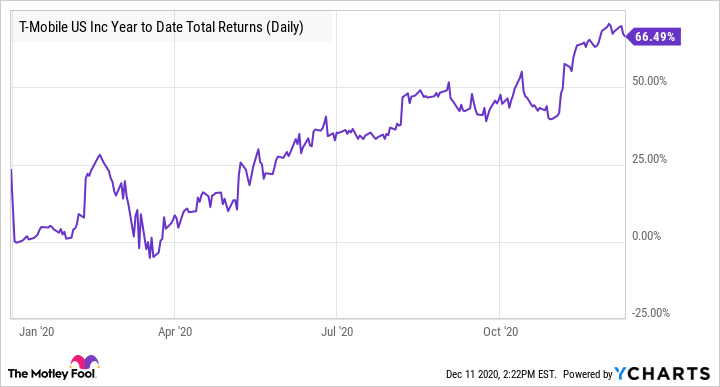 Yet despite those impressive gains, I think there's more left in the tank for T-Mobile.

You can chalk up 2020's outperformance to T-Mobile's closing of its merger with Sprint. Not only should T-Mobile reap $6 billion in synergies from the deal over time, but Sprint also brought with it valuable 2.5 GHz mid-band spectrum, which T-Mobile is using to support its 5G network that it's rolling out as we speak. In fact, combined with T-Mobile's existing 600 MHz low-band spectrum and its own millimeter wave holdings, the Sprint acquisition gave T-Mobile the most dedicated 5G capacity in the industry -- that's a stark change from the 4G era, when T-Mobile had a lagging network.

This week, T-Mobile unveiled a huge 5G hotspot data plan, including 100 GB of data for only $50 per month. For that amount of money, rival AT&T (NYSE:T) only offers 15 GB and Verizon (NYSE:VZ) only offers 5 GB. And earlier in October, T-Mobile expanded its LTE broadband program to 450 rural and suburban cities and towns, taking aim at the home broadband industry.

Of course, these new growth services are only ancillary to the main wireless business, which continues to post industry-leading postpaid subscriber gains, as reported in T-Mobile's November earnings report.

Over the next few years, T-Mobile should continue to gain market share from competitors in the 5G era, while also launching new 5G products and services, making it a solid pickup today, even after its impressive year-to-date gains. 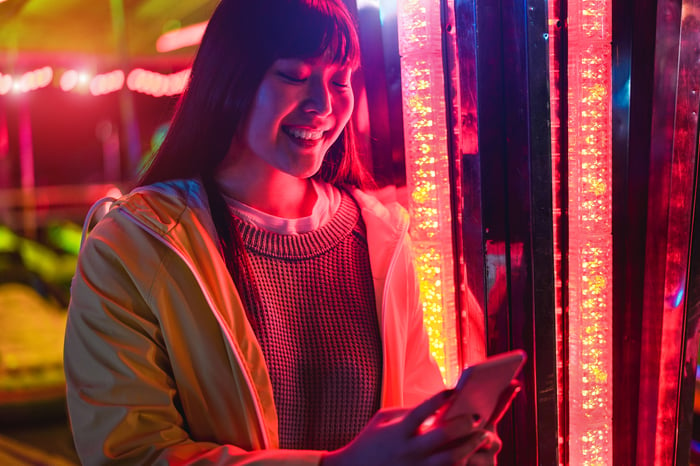 The highest-growth handset maker last quarter wasn't Apple, but rather Chinese player Xiaomi (OTC:XIACY), which is handsomely benefiting from troubles at rival Huawei. In September, the U.S. cut off Huawei from key U.S.-made semiconductors, or even semiconductors made with advanced U.S. semiconductor equipment. Huawei was the leading handset-maker in China, so its loss is rivals' again, and Xiaomi pounced on the opportunity, recently surpassing Apple in global smartphone shipments last quarter.

But Xiaomi isn't just about this one-off opportunity; it also has a very unique culture, and it's actually making big inroads in overseas markets like India, where it has number one market share, Europe, and most recently, South America. Xiaomi has pledged to not make more than 5% net margins on its hardware products, and its phones span low-cost smartphones all the way up to high-end 5G flagship phones packed with features, such as the Mi 10 Ultra. The one constant is that Xiaomi believes in offering superior value for the money.

Xiaomi then uses its installed base to sell internet services, which have much higher margins. These services include advertising, gaming, financial services, and others. In addition, Xiaomi has invested over 300 companies, and partners with investees to make IoT appliances under the Xiaomi brand name.

Xiaomi also unveiled its own smart manufacturing plant in August, where it makes its flagship phones in China. Doing more manufacturing in-house is a more capital-intensive strategy, but could also lead to more differentiation, and perhaps new manufacturing tools and techniques. Interestingly, Xiaomi just sold some shares, which are up a whopping 160% this year, to raise capital for this effort and push ahead in its battle against Huawei.

Diversified chipmaker Broadcom (NASDAQ:AVGO) just recently reported its fiscal fourth-quarter earnings, and results were strong. Revenue grew a solid 12% over the year-ago quarter, and adjusted (Non-GAAP) earnings per share surged 17.8%, both ahead of expectations. Management also decided to hike Broadcom's quarterly dividend 11% to $3.60 per share, or a 3.6% yield at today's prices.

It's not often you find a growing stock levered to 5G, data centers, and other communications trends trading at just 15.8 times forward earnings with a 3.6% dividend, but there you have it. Oh, and by the way, management sees next quarter's revenue growth accelerating to 13%. Not too shabby!

Broadcom is highly diversified, making chips that go into a variety of applications, and even buying itself into the software business in recent years. However, last quarter it got about 31% of its revenue from its wireless chips. Management noted that wireless, "was up 43% sequentially in Q4 with the launch of new-generation flagship phone by a large North American OEM customer. Still, this was down 9% year on year given the one-quarter delay in the ramp of production of that program."

That sounds an awful lot like the new iPhone 12 to me, meaning Broadcom gets a substantial amount of business from Apple. But as 5G increases demand for data centers and edge computing capacity along with handsets, Broadband's other segments will benefit from those trends as well.

Broadcom currently trades at about half the valuation of Apple, and its dividend is about 6 times that of Apple's, making it the choice for more defensive value investors in the 5G space today.