As the broadest measure of economic activity, Gross Domestic Product (GDP) is arguably second only to the monthly employment report in terms of the attention it commands from economists, investors, and the financial media. As such, it's worth knowing what the headline statistic -- the annual growth rate in real GDP -- represents. Below, we'll take a thorough look at how to calculate this rate, including a worked example.

What is the Gross Domestic Product?

Gross domestic product, or GDP, measures the value of all final goods and services produced by labor and property in a well-defined geographical area. For example, you can produce GDP estimates for California, the European Union, or even the world.

In practice, the most widely reported GDP data are country-level data. GDP is considered to be the broadest indicator of a country's economic activity and the task of measuring GDP usually falls on national statistics agencies.

In the U.S., the Bureau of Economic Analysis (BEA), part of the U.S. Department of Commerce, is tasked with producing official GDP data and it reports that data on a quarterly basis (although the GDP estimates go through a couple of revisions -- the third estimate is considered final).

For more than you'll probably ever want to know about GDP and the seven NIPA accounts, you can have a look at this 25-page GDP primer from the BEA.

What does the "real" in "real GDP" mean?

You may have heard economists or journalists refer to "real GDP." This refers to GDP estimates that have been adjusted for inflation.

Although politicians would be only too happy to make up their own GDP numbers, there is no such thing as an imaginary GDP.

Why adjust for inflation?

If were to compare GDP for two periods measured on a nominal basis (referred to as "current dollar" GDP estimates), we'd expect GDP to increase over time simply by virtue of the general increase in the price level of goods and services.

However, what we're really interested in finding out is how economic activity is progressing over time. Stripping out the effect of inflation from current dollar GDP estimates to produce real (or "chained dollar") estimates gets us closer to that goal.

Why calculate a growth rate?

One quarter's GDP figures in isolation are not that useful. In order to get a sense for changes in economic activity, economists, capital markets professionals, and a variety of other people like to be able to track the growth rate in real GDP. In fact, that's the single most important figure in the BEA's quarterly releases and the only one mentioned in the first paragraph of the release.

Not surprisingly, when it comes to GDP data, it's also the figure that is the most widely cited. When people in the financial services industry or the financial media refer to "the GDP number" or "the GDP print," they are referring to one thing: the annual growth rate in real GDP. It's very rare for anyone to mention the dollar amount of GDP.

How does one calculate the real GDP growth rate?

In the U.S., the growth rate that the BEA reports is a quarter-on-quarter growth rate, which is the growth in real GDP from one quarter to the next, expressed as a percentage. The growth rate is expressed on an annual basis, so there are two steps to the calculation:

First, we find the growth rate in real GDP on a quarterly basis, which is a straightforward percentage calculation that relates the change in GDP during the most recent quarter to the level of GDP in the quarter that preceded it: 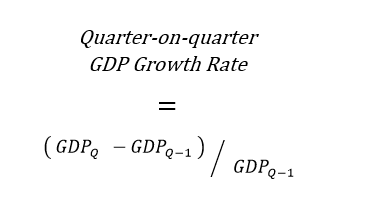 Where GDPQ refers to the level of GDP in quarter Q and GDPQ-1 is GDP in the previous quarter, Q-1.

Let's refer to the rate we obtained in step 1 as g(quarterly) (sort of like the men's magazine). Remember, it's a quarterly rate and we're looking for an annual rate, so we annualize it using the following formula:

The annual rate is equivalent to the growth rate over a year if GDP kept growing at the same quarterly rate for three more quarters (or the same average rate).

Calculating the real GDP growth rate -- a worked example
Let's work through an example, using the most recent GDP data. The following image shows part of an Excel spreadsheet that can be downloaded from the BEA website (you can find it here -- click on "Tables Only" in the right-hand side of the page).

Highlighted are the two figures that we'll need for our calculation: the GDP for the first and second quarters of 2015. 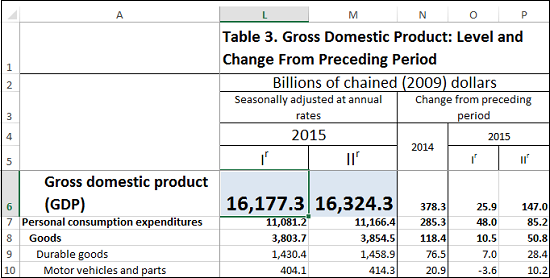 Applying the formula from step 1, the quarter-on-quarter real GDP growth rate during the second quarter of 2015 is equal to:

Applying the formula from step 2 to find the annual rate:

Rounding to a single decimal, we get an annual GDP growth rate of 3.7%.

If our math is correct, that number ought to match up with the one reported in the BEA's press release:

Technically, the rate we have just calculated is referred to as the quarter-on-quarter seasonally adjusted annual rate (it may show up as "QoQ SAAR") because official statistical organizations use seasonally adjusted GDP estimates in their calculations. Seasonal adjustments attempt to neutralize the effect of changes in GDP that are purely the result of recurring seasonal phenomena in order to arrive at data that gives a better picture of underlying economic activity and it cyclicality.

According to the BEA, "[E]xamples of factors that may influence seasonal patterns include weather, holidays, and production schedules."

Here's an example of a seasonal factor: On the strength of their new year's resolutions, people join gyms en masse in January. Does this mean the fitness industry has exploded since the previous month? Of course not.

To answer the question of whether activity in the industry has improved or deteriorated, your instinct would probably be to compare January's results with those achieved the previous January. Good instinct: Logically, corresponding quarters don't require seasonal adjustments and that's one of the advantages of a second method for calculating the annual growth rate in GDP.

Is there a second method to calculate a GDP growth rate?

Using the same notation as previously: 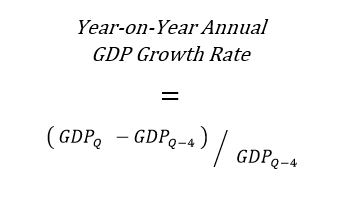 As mentioned above, that's not the way in which the government reports GDP growth in the U.S., but China's widely followed headline GDP growth rate is a year-on-year annual rate: 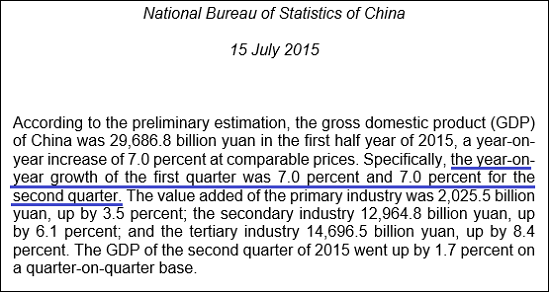 How do the two calculation methods compare?

Furthermore, because it compares corresponding quarters, the year-on-year rate is not dependent on the methodology for seasonal adjustments, which are necessary when you are comparing two consecutive quarters.

The main advantage of using a quarter-on-quarter growth rate is that is that it easier to identify turning points in the economy, such as the end of a recession/beginning of an expansionary period.

The following graph shows both growth rates for the period 2005 through 2014. You can see that during the Great Recession of 2008-2009, by the time the year-on-year rate (red line) bottomed out, the quarter-on-quarter rate had already rebounded sharply and was close to flat, suggesting the recession was almost over: 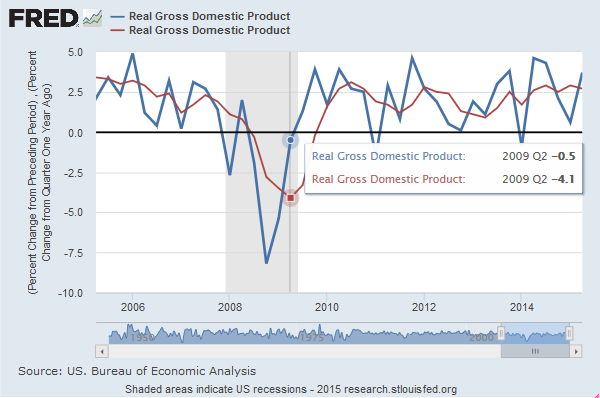 Both methods have strengths and weaknesses (although economic statisticians generally prefer the year-on-year rate). The good news is that any statistical agency worth its salt will publish both rates. Even if they don't, you've now got all the tools necessary to calculate them on your own using GDP figures. But make sure to select the right ones: seasonally and inflation-adjusted is your mantra.

And once you've seen how economies are doing on the whole, you may want to start betting on individual parts of them -- i.e., companies. If you're thinking its time to start buying stocks, consider taking a look at our broker center, which has some good advice on how to begin.