Deciding where to live during college is a major quandary many students face. You can save money by living at home, but you might miss out on the fun of living on campus. Then again, the costs of living in a dorm, coupled with the added debt that's likely to entail, are enough to make many students forgo the experience. There's also the option of living off campus, which is often a lower-cost alternative to dorming. As you think about where to live during college, you'll need to weigh the pros and cons of each possibility to determine what's right for you. 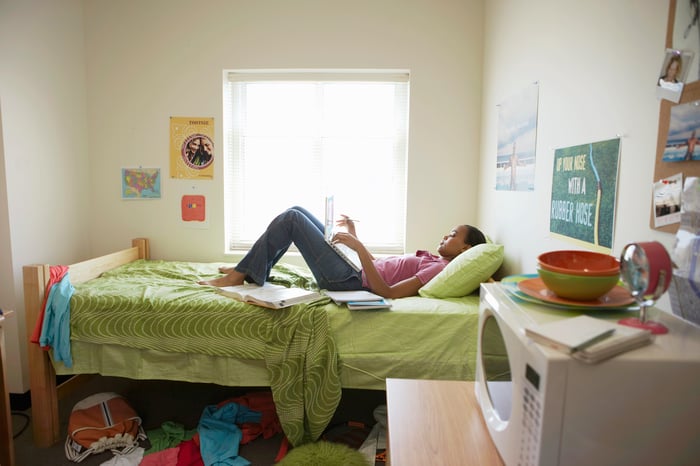 How much will living on campus cost?

The cost of living in a dorm can vary based on where you go to school, but as a general rule, residing on campus is a far more expensive prospect than living at home.

If you're thinking those numbers are pretty high, wait till you see how much living in the dorm adds to the equation. When you consider the whole college package, including room and board, those numbers for the 2015-2016 school year went up as follows:

What this data tells us is that living on campus can easily add $10,000 a year to the cost of a college education. And that's a lot of money to pay for a fun but ultimately unnecessary experience.

It's a financial decision

The desire to live on campus often boils down to peer pressure, and you may be inclined just to spend the extra money for fear of missing out on the experience. The thing to remember about college, however, is that it's really an investment in your future more than anything else. Those who don't live within a commutable distance ofcollege may have no choice but to live in a dorm. But if living on campus isn't a necessary part of the equation, skipping it could reduce your student debt load and save you thousands of dollars in the long run.

How much is that degree worth?

While paying a premium to live on campus may not be worth the money, getting your degree is a different story. Those who have college degrees earn an average of almost $23,000 more per year than those with high school diplomas alone.

You can use the following calculator to see just how much your college degree might ultimately be worth:

As you can see, the money you invest in a college degree can be more than repaid by a lifetime of higher earnings, even when you factor student loan interest into the equation. But there's a difference between investing in your future and spending an extra $10,000 a year for the experience of sharing a small, confined space with a bunch of strangers.

Unless you have the money to pay for your education outright, you'll need to do what everyone else does and take out loans. So let's see what the privilege of living on campus might really cost you over time. Let's say you take out an additional $10,000 a year for four years to live on campus, and it takes you 10 years to pay off that debt at 5% interest. Not only will that add $425 to your monthly student loan payment, but after a decade, that extra $40,000 will have turned into close to $51,000 when you factor in the interest you'll be forking over.

Now imagine that instead of taking on that extra debt and paying $425 a month for 10 years, you skip the dorms and start saving $425 a month once you graduate college. Assuming you invest that money and get an average annual 6% return (which is below the stock market's average), then after 10 years, you'll have over $67,000 saved up -- a fabulous start to your retirement fund.

If you really have your heart set on experiencing dorm life, then consider doing it for a year and then residing at home for the remainder of college, assuming you live within a reasonable commuting distance. If not, then it pays to explore off-campus housing, which is often less expensive than living in a dorm (big-city colleges being the exception). Remember, you have your whole life ahead of you to live where you please, but it's better to indulge those preferences as a working adult with a salary than as a poor college student who's reliant on loans.