My sons bought Tesla stock in 2013 and 2014. What lessons have they learned, and would I let them buy more?

I started investing with my two boys when they were just 5 and 7 years old. This gave them about a 30-year advantage over their dad of buying their first stock. Along the way, we've learned some lessons of long-term investing and seen some pretty great returns as well.

Tesla (TSLA -6.42%) was one of the stocks that my kids bought before I owned any shares of the electric-vehicle maker. They thought the technology was cool and that CEO Elon Musk was as talented as Iron Man, and they kept seeing more and more Teslas on the road.

Let's look at their investing thesis and how it's played out.

Tesla is a tech company that just happens to make cars. The company's ability to innovate has propelled its popularity and fueled demand of its vehicles. My boys have had some kind of electronic device in their hands since before they could read, so having a car that's described as an app on four wheels was a technology they embraced without question.

The ability for over-the-air updates was a revolutionary step forward in the auto industry. It has allowed the company to provide customers new features after they've brought their car home, avoiding expensive recalls.

My kids love the fact that Tesla cars don't use gas, they make no noise, have two trunks, have a huge display for navigation and feature settings, and are ridiculously fast. Furthermore, Tesla has been constantly upgrading its cars more like a software company than a car company, making it even harder for the incumbent competitors to catch up.

Musk has said the company "will never stop innovating," and will provide major upgrades every 12 to 18 months. Tesla's proven track record of innovation by itself is a great reason to invest in this company, but there's more to like about Tesla.

It's true. The Marvel movie version of Tony Stark, the fictitious eccentric billionaire, CEO, and Iron Man inventor, was modeled after Elon Musk. Looking at Musk's resume, it's no surprise that my boys think of Tesla's CEO as Tony Stark.

Musk is a visionary leader, inspiring others to achieve the unimaginable. In the early days of Tesla, he published a not-so-secret master plan, and with the launch of the Tesla Model 3 the company will have accomplished those amazing goals in a little more than a decade. Once that checklist was close to complete, Musk published his "master plan part deux," which includes innovations such as integrated solar-roof-with-battery, self-driving cars, and a ride-hailing service to allow Tesla owners to make money with their vehicle when they are not using it.

While being visionary makes for great headlines, it's nothing without being able to bring the ideas to reality. Musk does this with his own confident style, while laughing at the competition. The Tesla charging network and the Gigafactory are two examples of never-before-accomplished feats.

Tesla is constantly improving its product performance and its ever-growing charging network. The company's award-winning cars drive increasing demand for its innovative products. The Tesla brand and its cars are becoming so popular that the Model 3 has a waiting list of over 450,000 customers that put down $1,000 to reserve a car they've never driven.

Recently, the company doubled down on its efforts to ramp up manufacturing capacity to deliver 500,000 vehicles per year by 2018, but that may not even be enough to keep up with demand. Musk is now projecting that demand could surpass 700,000 of the low-end model, and with the details of the Model 3 available, the car does not disappoint. But the production ramp is very steep to get there. Based on the Q2 2017 earnings call, Fool.com writer Evan Niu, estimates the company could manufacture as many as 125,000 cars this year. That's still a far cry from delivering 500,000, let alone 700,00 of just the Model 3.

While Tesla is growing fast, it's important to put this in perspective in terms of the company's valuation. Currently, Tesla's market capitalization is almost $63 billion, a big $17 billion higher than Ford's, but Ford sold over 87 times more cars than Tesla in 2016, and the electric-car-solar-panel-installation company is still not consistently profitable. 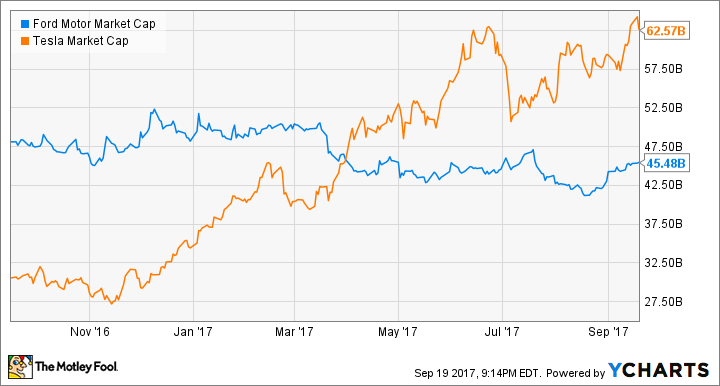 Tesla bears would point out that Model S growth is slowing, the company's infrastructure growth will require additional capital, the SolarCity acquisition could be a drag on the bottom line, Musk frequently stretches the truth, and Tesla often fails to meet delivery expectations.

My kids first invested in Tesla in 2013 when the stock was under $100. At the time, I thought Tesla was overpriced, and I wasn't the only one. When the kids' next chance to buy stocks came around in 2014, the stock had risen to over $200. In the meantime, my older son had the opportunity to drive a Model S and was blown away, which is why he was so adamant about buying more shares. Both purchases have beaten the market, and the 2013 buy has more than tripled the market returns, but the volatility has been tremendous. 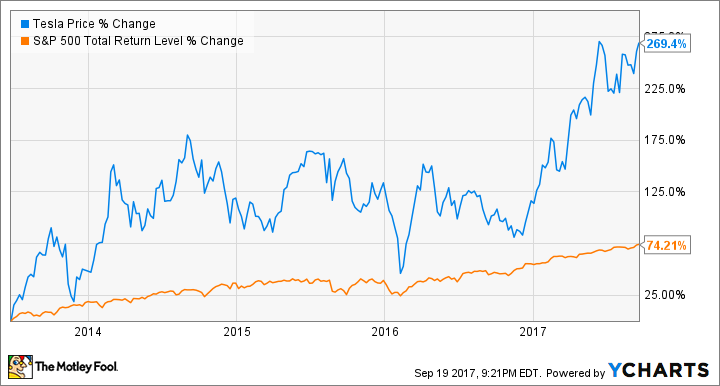 Would I let my kids buy more? It's likely my older son wouldn't give me a choice, but that's OK because he is adding to a small position in a diversified portfolio of more than 20 stocks and has a really long-term perspective. Musk talked about the stock being for long-term investors only: "So I'd say, Tesla is a very good investment for the long term, but it's impossible to say what it is in the short term."

The most important lesson my kids have learned with this investment is patience. After all, Tesla is changing the world, and that takes time.