Johnson & Johnson (NYSE:JNJ) is one of the best-known companies in America, with most consumers making its over-the-counter products a staple of their medicine cabinets. Yet Johnson & Johnson has gotten a lot more growth from its development of key pharmaceuticals, and the company's impressive pipeline of candidate treatments and medical devices plays an important role in the future of the company.

Dividend investors have gravitated to Johnson & Johnson because of its yield and its long history of raising its quarterly payouts to shareholders for decades. Yet even J&J faces challenges that could hurt the company and its stock. Below, you'll learn more about whether Johnson & Johnson's dividend is safe for investors to count on going forward.

Johnson & Johnson's current dividend yield of 2.5% is pretty close to the sweet spot for dividend stocks right now. It's above the roughly 2% yield of the overall S&P 500, but it isn't so high as to raise concerns about its sustainability. J&J's stock price has soared recently, and that has brought the company's dividend yield down from its historically higher levels.

Over the past 10 years, Johnson & Johnson has had yields approaching 4% at times, but even with the dividend increases that the healthcare company has given shareholders, more dramatic share-price gains have pulled yields back toward the lower end of their range from the past 10 years. 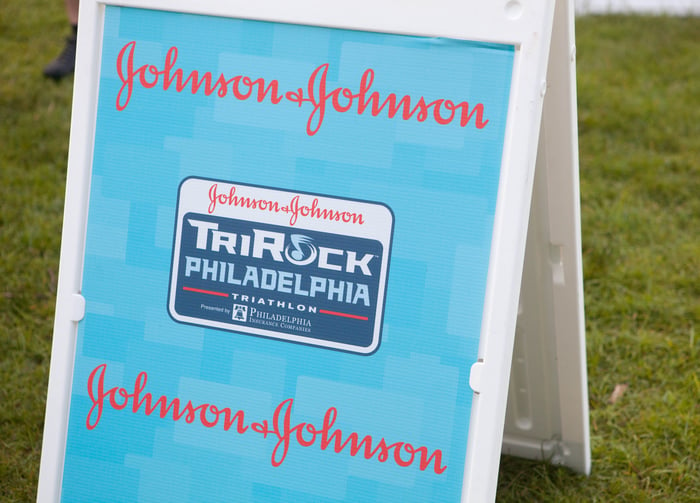 Johnson & Johnson has a healthy payout ratio, with its dividends making up just over half of its overall earnings. That's consistent with what the company has done in the recent past, paying anywhere between 45% and 75% of its earnings during the 2010s. After slumping in 2011 and 2012, J&J's earnings have rebounded convincingly, and that's been responsible not only for the drop in payout ratio, but also for much of the stock's climb over this period, which has led to a double in the share price.

Johnson & Johnson has an impressive track record of dividend growth that dates back for more than half a century. J&J qualifies as a Dividend Aristocrat because of its consistency in giving investors annual payout increases for 55 years, having earned the mark of prestige decades ago. As you can see below, the rate of growth has also been remarkably consistent, which sets Johnson & Johnson apart, even from some of its more successful peers in the dividend-stock universe. 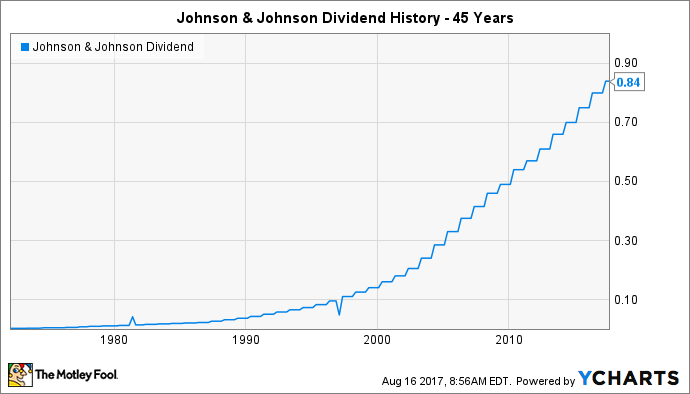 Lately, Johnson & Johnson has had some trouble giving investors the growth that they've wanted to see. In its most recent quarter, the healthcare giant managed to grow its revenue by only 2%, and the key pharmaceutical segment saw even worse performance, posting a 0.2% drop in the segment's top line. Acquisitions helped the company boost its sales from medical devices and consumer products, but organic growth has been tepid, at best. Sluggishness has shown up in profits, as well, with J&J posting a slight decline in GAAP earnings, but managing to salvage a 3% gain compared to the previous-year's period.

Yet J&J is working to stoke its growth engines. Prospects for specialty pharmaceuticals look increasingly promising, and the rising tide of retiring baby boomers could provide a big increase in demand for medical devices aimed at their care. The recent purchase of Actelion was aimed at adding pulmonary-disease treatments to Johnson & Johnson's overall portfolio, and although the price tag was steep in some investors' eyes, J&J hopes that the deal will produce some billion-dollar blockbusters that will get its top line moving higher.

For decades, Johnson & Johnson has been able to weather changes in the healthcare industry to deliver the growth that investors need. The company is dealing with some challenging issues, but J&J has found ways to overcome obstacles before, while still treating its shareholders well. Given its track record of consistency, Johnson & Johnson is likely to keep up its pace of dividend growth well into the future.