To say that oil stocks have underperformed is the understatement of the decade. Not only have oil prices and oil stocks wildly underperformed the broader market over the past five years, but many of the companies that work in the industry can't even keep up with the price of oil. 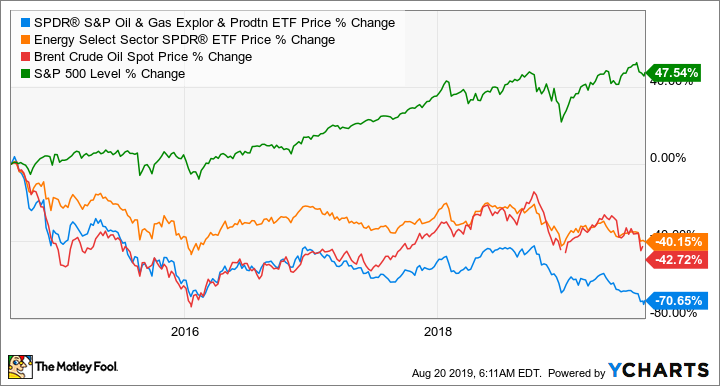 Results like this aren't going to inspire anyone to invest in this sector. But like flowers growing from cracks in the concrete, there are good stocks to be found in this thoroughly beaten-down sector. So, we asked three of our Motley Fool contributors to highlight stocks in the oil and gas business they think are worth buying today. Here's why they picked Plains All American Pipeline (NYSE:PAA), Clean Energy Fuels (NASDAQ:CLNE), and ExxonMobil (NYSE:XOM).

Cashing in on the flow of crude

Matt DiLallo (Plains All American Pipelines): There aren't enough pipelines to move America's ever-expanding oil supplies from production areas to market centers. That infrastructure issue has been a boon for Plains All American Pipeline. The oil pipeline MLP has been cashing in on its ability to move crude oil as well as lock up a growing list of expansion projects. Because of that, the company is on track to grow its cash flow faster in 2019, which should continue over the next several years.

Plains All American initially anticipated that this would be a transitional year as it worked to shore up its balance sheet while also funding expansion projects. However, after a strong first half, it now expects its cash flow to surge nearly 14% from last year's level. That's well above its initial view that earnings would only grow by about 5% because it sold a stake in a pipeline to bolster its finances.

Meanwhile, the company should be able to continue growing at an accelerated pace over the next few years because it has approved six more pipeline expansions. These projects should give plenty of boost to its dividend, which yields 6.6% after a 20% increase earlier this year. That growing income stream should richly reward investors in the coming years, making Plains All American an excellent oil stock to buy right now. 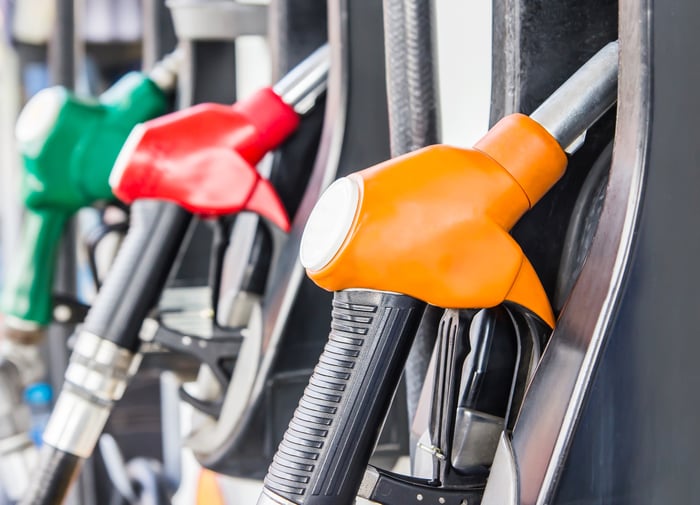 Jason Hall (Clean Energy Fuels): Since reporting second-quarter earnings on Aug. 8, shares of the natural gas for transportation leader have lost nearly one-quarter of their value. That kind of drop would have one think the company is seriously struggling, and that other alternative fuels like electric-and hydrogen-powered vehicles were set to eat its lunch.

Thing is, nothing could be farther from the truth.

The reality is, the company grew fuel volumes -- the best measure of its sales growth -- by 11% in the quarter, matching its growth in the first quarter. Moreover, the company has reached the point where its scale is paying off; it generated $17 million in positive operating cash flow in the quarter as volume grew while its operating expenses remained roughly flat.

It's also set to continue delivering more fuel. Despite the attention the press gives EVs and hydrogen, natural gas is the biggest alt-fuel player in medium- and heavy-duty transportation. Simply put, other alternative-fuel systems are still in early development, with very limited vehicles even commercially available and in only a few narrow applications, such as short-range drayage vehicles and public transit buses.

But here's the big one: Clean Energy isn't just selling one fossil fuel -- natural gas -- to replace diesel or gasoline. Forty percent of its fuel volume is renewable natural gas -- which it brands as "Redeem" -- that's made from human-driven farm and landfill waste.

It grew Redeem sales by 60% last quarter, taking a substantial amount of methane that would otherwise enter the atmosphere as a powerful greenhouse gas and turning it into a fuel that's 70% cleaner than diesel or gasoline.

Shares are down 42% from the 2019 high, as the market looks right past a strong growth story that has a lot of room to run. Now's an excellent time to buy while the market overlooks it. 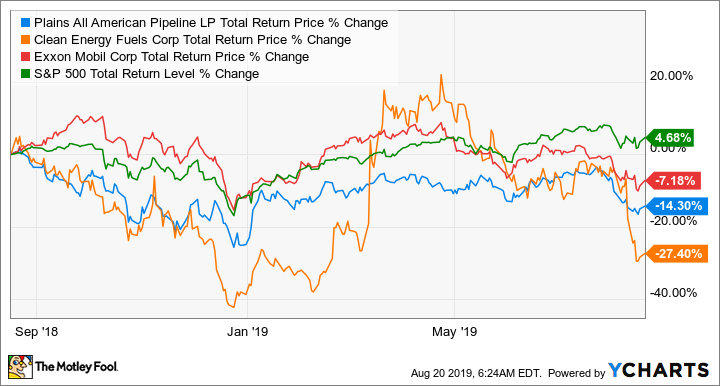 When in doubt, stick with good capital allocators

Tyler Crowe (ExxonMobil): If anyone had any lingering confidence that they are able to gauge where the oil and gas market is going, these past five years should have thoroughly erased it. Shale drilling in the U.S. has been a game changer in more ways than initially forecast. Not only has the relatively cheap, quick-to-market source of petroleum put a damper on prices, so too has the management teams at many exploration and production companies. Management's ability to repeatedly shoot themselves in the foot by providing one solution to all problems -- drill more oil -- is confounding.

When there are so many management teams out there making awful capital allocation decisions on the hopes that higher oil prices will bail them out, investors who actually want to make money in this space should stick to the companies that have a track record of spending money in the right places. One that has the track record of excellent capital allocation over the years is ExxonMobil, and the things it's spending on today look like they will pay off in the long run.

Unlike companies that drill now and hope for higher prices later, ExxonMobil's plan for shale drilling is much more comprehensive. The company intends to extract maximum value out of each hydrocarbon by retooling its massive refining and petrochemical manufacturing capacity in the U.S. to handle the unique chemistry of shale oil. Its plans to expand its refining and chemical businesses are just as ambitious as its goal to increase shale production by over 1 million barrels of oil per day in the next five years.

Those investments, in addition to its massive oil development in Guyana, are examples of potentially high-return investments that ExxonMobil anticipates will generate greater than 20% returns on invested capital at today's oil prices.

Instead of hoping that a company can get some oil price relief, it's probably better to stick with the ones that can operate in today's oil price environment. ExxonMobil can do that, and its stock trades at a historically high dividend yield of 4.9%.