It's been another brutal year for oil and energy. While prices are still up from the big industry meltdown in 2015 and 2016, an initial rally early this year has evaporated as worries over global economic growth have taken center stage. As lower growth -- or even economic contraction -- means less energy is needed, that has spelled bad news for oil and energy producers.

Nevertheless, a handful of companies have been rolling with the punches, and tough times often create a buying opportunity. Here are three oil stocks -- excluding pipeline companies, which you can read up on here -- that are worth a look: Chevron (NYSE:CVX), Occidental Petroleum (NYSE:OXY), and Phillips 66 (NYSE:PSX). 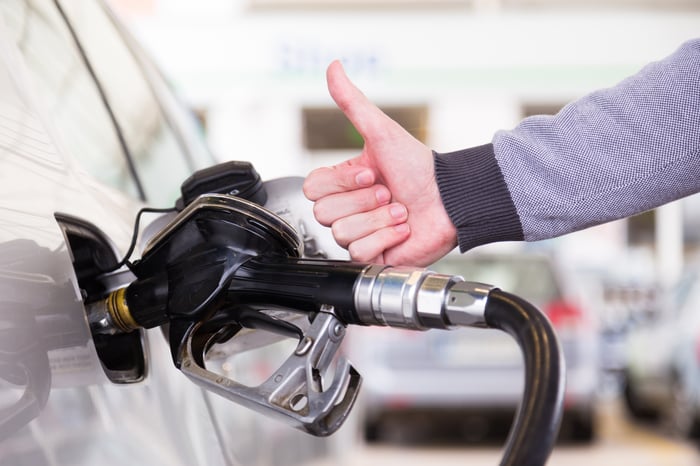 A big name offers a margin of safety

Chevron is a boring pick. Given that it's one of the biggest names in the energy industry, there's not going to be any sizzling share price appreciation here -- and that's exactly why it appeals to me right now. In spite of all the ups and downs inherent in oil, Chevron has managed the swings well and has handily beat out the average energy stock's return over the last decade. 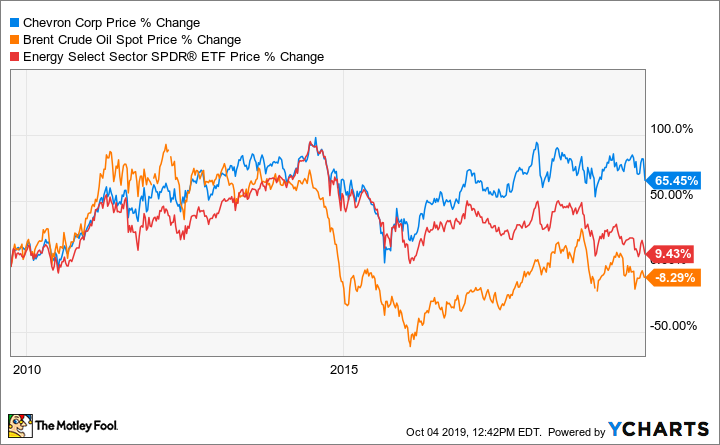 The integrated oil giant and services company has managed to outperform the average by keeping a tight hold on operating costs and has kept its level of debt low. That has helped its free cash flow -- basic profit after operating and capital expenditures are paid for -- continue to chug higher, especially since the cyclical bottom back in 2016. Free cash flow is up 166% over the last decade and was $18.5 billion over the last trailing-12-month stretch.

Best yet is the dividend, currently yielding 4.2% a year and easily covered by Chevron's cash-generating machine. Management has also talked about needed industry consolidation, and its healthy balance sheet will give it the ability to make some acquisitions and other investments to drive slow and steady growth in the years ahead.

Occidental Petroleum made a splashy and controversial move when it took over peer Anadarko Petroleum over the summer of 2019. The two companies were roughly equal in size at the time of the proposal, and Occidental took on substantial debt to make the acquisition -- for which it outbid Chevron. Occidental's plan has been panned as a bad idea, and the stock has plummeted as a result. 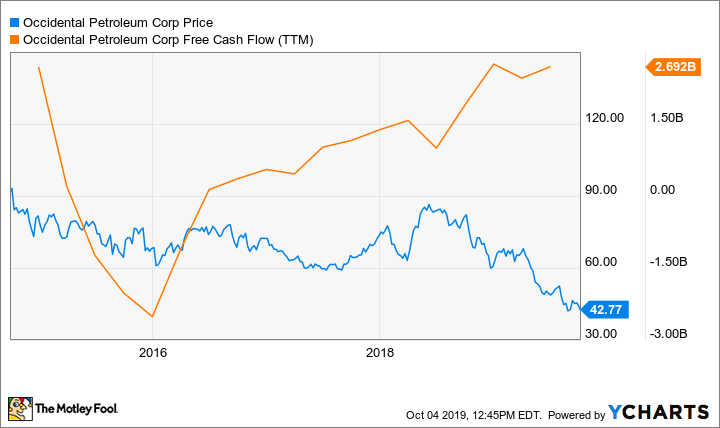 However, the diversified oil, energy, and chemicals producer had a tidy balance sheet prior to the purchase, and it still generates enough cash to invest in its operations and cover its dividend payment. As to the latter point, Occidental even raised its dividend after the second quarter of 2019, making the shareholder payday good for a hefty 7.4% annualized yield.

Granted, there's a reason for the high yield and recent share-price plunge. A lot is riding on Occidental being able to offload non-core assets from Anadarko to reduce some of its debt, a process that has already begun with the sale of some of its East Africa and U.S. pipeline stakes. Management has said it sees $3.5 billion in eventual cost synergies between the newly merged companies.

It's a high-risk endeavor, one that runs the risk of hurting shareholder value more than if Occidental and Anadarko had remained as separate entities (or if Chevron had succeeded in its bid). Nevertheless, after the stock has tanked, pessimism may have outdone itself, here. It looks like the time is right to start eyeing an initial purchase.

Back to the big and boring. Phillips 66 was spun off from former parent Conoco Phillips (NYSE:COP) back in 2012 and has done exceptionally well ever since. Its refining services -- which produce everything from small vehicle gasoline to industrial-grade fuels and chemicals -- are nothing to get overly excited about. But the financial results have been fantastic. Shares are up over 200% since Phillips 66 became independent, it has steadily increased its dividend every year, and with the exception of a couple-year run starting in the 2016 post-energy bear market, the company has maintained a return on invested capital in the double-digits. 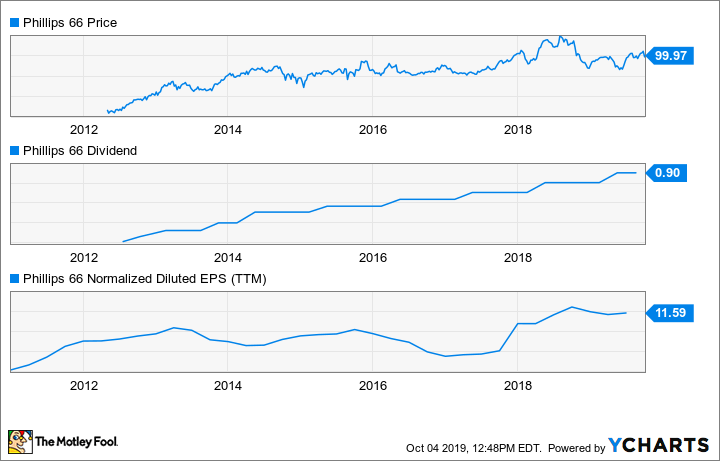 Phillips 66 stock has also recently taken a step back as global growth concerns have weighed on it. But results have continued to move higher in spite of the uncertainty, and the refining giant has found plenty of places to keep investing for future growth. These projects are diverse, from pipeline projects, to increased global distribution of its products, to a lucrative joint venture with Chevron producing plastics. Phillips 66 has many irons in the fire, giving it the diversification to weather all sorts of twists and turns in the energy industry.

More than the growth, though, the dividend itself is the real story, here. Management's goal is to continue slowly but steadily raising the paycheck to shareholders, which it did again after the second quarter. The pay raise paired with the pullback in share price means the stock is currently yielding 3.7% a year.

It may not be a story that grabs any headlines, but I think Phillips 66 stock is still worthy of a look for investors in need of a cushion during stock-market volatility, as well as those looking for a way to supplement retirement income.