In a good year for the stock market overall, McDonald's (NYSE:MCD) has seen a turbulent time in 2019. The fast-food giant had posted huge gains for the year by late summer, but a recent setback has pulled the stock back to a more modest year-to-date rise. That performance has been consistent with what McDonald's produced in 2018 as well.

As important as stock price appreciation has been to longtime shareholders in McDonald's, the Big Mac maker also pays lucrative dividends that have added to overall returns. Ever since disco came into its ascendency, McDonald's has rewarded its investors with ever-increasing dividends. Annual boosts to its dividend payout have become a regular occurrence for McDonald's, and investors want to know whether 2020 is likely to continue the streak. Let's take a closer look at that question.

McDonald's long ago qualified to become part of the well-known Dividend Aristocrat, and the boost to its payout that the fast-food king just made as its 44th straight annual increase. Over the stock's history, McDonald's has remained committed to steady dividend growth, with yearly percentage boosts in high single-digits and up. That growth accelerated after 2000, when the company made a true commitment to returning more of its capital to shareholders. 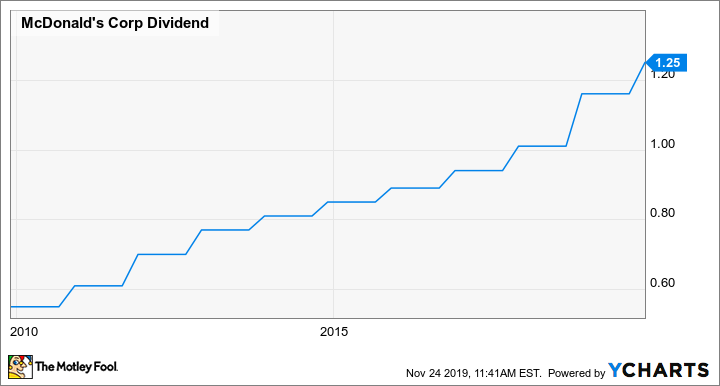 In the more recent past, McDonald's has varied the pace of its dividend growth according to recent financial performance, but it's generally still been generous with its payouts. A 15% increase in 2018 was prompted in part by the reduction in U.S. corporate tax rates, but the more recent 8% boost this fall was more in line with what we've seen from McDonald's over the long run.

Can McDonald's deliver another dividend incresase in 2020?

Yet there's a lot of uncertainty about McDonald's right now. From a fundamental perspective, the fast-food giant didn't make investors very happy in the third quarter of 2019, posting only the smallest of increases in earnings per share year over year. Total net income was actually down from year-ago levels, and it took a falling share count to lift per-share profit figures. Comparable-restaurant sales were strong, but overall revenue was up only marginally from year-earlier figures.

Even more troubling is the recent departure of former CEO Steve Easterbrook, who violated the restaurant chain's corporate policies by entering into a consensual relationship with another McDonald's employee. Given the role that Easterbrook played in reinvigorating McDonald's business, some investors aren't convinced that new CEO Chris Kempczinski will have the same ability to drive the company forward.

That said, much of the work to refresh McDonald's image has already taken place, and there should be a honeymoon period where Kempczinski will merely have to ride McDonald's upward momentum. As long as business stays good in 2020, then boosting the quarterly payout by $0.10 late next year to $1.35 per share would be consistent with past practice. If the business gets weaker, though, then McDonald's might end up having to be more modest in the dividend growth it shares with its investors.

Will McDonald's Raise Its Dividend in 2020? @themotleyfool #stocks $MCD Next Article
Current