Intensifying geopolitical relations in addition to a pro-military administration have been good news for the defense sector -- raising the Spade Defense Index 37% in 2019. Government spending for federal contractors in fiscal 2019 was $1.4 trillion, as it awarded several defense contractors substantial contracts.

Owning defense stocks ahead of elections is risky. However, the three companies below are well-established contractors, each paying a strong and growing dividend while offering diversified revenue streams.

Here's why Lockheed Martin (NYSE:LMT), Raytheon (NYSE:RTN), and General Dynamics (NYSE:GD) are the top defense stocks to buy in January. 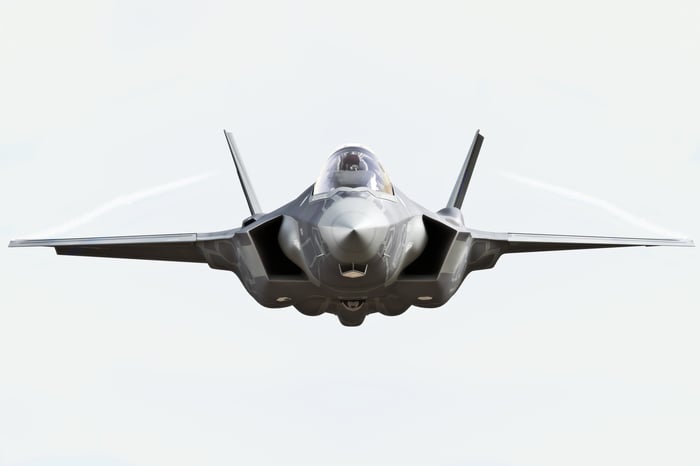 As the global leader in the defense industry, Lockheed Martin is the single largest pure-play defense contractor with substantial ongoing contracts with the United States government. Building and sustaining both the F-22 and F-35 fighter jets -- a trillion-dollar program between Lockheed and subcontractors in addition to a massive backlog of future business -- makes Lockheed a must-own stock.

Lockheed was recently awarded a $1.96 billion contract to build four Multi-Mission Surface Combatant (MMSC) ships for the Saudi Arabian Navy in addition to receiving a $7 billion award to maintain and sustain the U.S. Air Force F-22 Raptor program until December 31, 2032.

Additionally, Lockheed purchased Sikorsky Aircraft from United Technologies for $9 billion in 2015, bidding for Army contracts with recent talks to refresh the helicopter fleet during the 2020s. Lockheed's chief executive Marillyn Hewson is bullish on the growth of Sikorsky during the next decade, noting that Sikorsky is on contract for the CH-53K for the U.S. Marine Corps, the VH-92 U.S. presidential helicopter replacement, and the U.S. Air Force's Combat Rescue Helicopter.

A forward dividend yield of 2.5% with a five-year compound annual growth rate (CAGR) of more than 10% makes Lockheed a compelling income holding in combination with a diversified and growing portfolio.

Following the June 2019 merger announcement with United Technologies aerospace (Pratt & Whitney and Collins Aerospace), Raytheon is on pace to become the second-largest aerospace and defense contractor behind Boeing in terms of revenue.

To complete the spinoff, United Technologies must offload both Otis elevator and Carrier HVAC businesses before combining with Raytheon, forming a new company called Raytheon Technologies with the ticker RTX. The deal is expected to close, pending regulatory approval, during the second half of 2020. The all-stock, $100 billion deal will generate an expected annual revenue of $74 billion.

Focusing on precision weapons, sensors, and electronics, Raytheon is well known for the MIM-104 Patriot surface-to-air missile system in addition to the Maverick, Sidewinder, Tomahawk and the electronics that power the THADD ballistic missile interceptor. Raytheon has the flexibility to sell products overseas, with 50% of the total backlog and one-third of total revenue coming from foreign customers outside the United States.

Raytheon shareholders own 43% of the new spinoff with United Technologies, giving investors a stake in the growth of the turbofan engine on the Airbus A320 NEO from Pratt & Whitney. That, plus a forward dividend yield of 1.7%, makes Raytheon an attractive buy.

The recent launches of the G500 and G600 are driving growth for Gulfstream, as jet sales increased 40% during the fourth quarter of 2018. This is due, in large part, to nine shipments of the G500 during the quarter and the first G600 deliveries during the third quarter of 2019, assisting Gulfstream to deliver 38 aircraft in the recent quarter -- an increase of 11 units year over year.

Trailing Lockheed Martin, General Dynamics' dividend yield is 2.3%, generating a strong narrative for income investors to hit the buy button. In addition, a forward price-to-earnings of less than 15 puts General Dynamics at a discount relative to Lockheed Martin and Raytheon, which offer multiples between 18 and 19. This company is a versatile and stable defense contractor with a compelling valuation, making it a must-own for January.