After a strong 2019 where the S&P 500 gained nearly 30%, many investors are wondering what's next. One solution is to park your money in solid dividend stocks that provide a guaranteed return in any market. These are the top four natural gas stocks to buy in January, which together, offer a balance of income, growth, and long-term upside.

Why invest in natural gas stocks?

As a result of the rise of United States energy independence, the U.S. is now the no. 1 producer of natural gas. Founded in 1977, the U.S. Energy Information Administration (EIA) collects and analyzes energy information for the public good. According to the EIA's December 2019 Short-Term Energy Outlook, "annual U.S. dry natural gas production will average 92.1 billion cubic feet per day (Bcf/d) in 2019, up 10% from 2018 ... natural gas production in 2020 will average 95.1 Bcf/d." 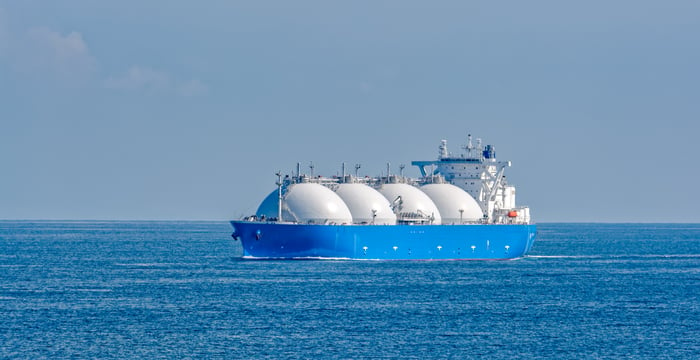 In 2015, Kinder Morgan slashed its dividend by 75% due to the oil market downturn. After a rocky few years, Kinder Morgan is finally looking like it can rekindle investor trust with plans to raise its annual dividend from $1.00 per share to $1.25 per share in 2020. At the current price, the stock would yield close to 6% with a $1.25 dividend.

The best part is that Kinder Morgan is able to raise its dividend without negatively impacting growth. Distributable Cash Flow (DCF), which is the amount of cash flow available for payments to shareholders was $1.60 per common share of Kinder Morgan for the nine months ended Sept. 30, 2019 whereas dividends per common share were just $0.75. That leaves Kinder Morgan with more money to invest in major projects, which is exactly what it has been doing. Two of Kinder Morgan's major growth projects are part ownership of two major pipeline projects, the Gulf Coast Express (GCX) and the Permian Highway Pipeline (PHP). Each is expected to be able to transport around 2 billion cubic feet per day of natural gas.

In late August, Pembina Pipeline (NYSE:PBA), one of the largest Canadian pipeline companies, agreed to buy Kinder Morgan's U.S. portion of its Cochin pipeline and its 70% stake in Kinder Morgan Canada Limited for CA$4.35 billion (US$3.27 billion) in stock and cash. The acquisition should help Pembina widen its full spectrum of midstream and marketing services to the energy sector. Pembina Pipeline is an attractive natural gas dividend stock because its long-term strategy is predicated on financial guardrails, keeping the company in check throughout its expansion process.

Typically, the focus on high-yielding natural gas stocks is on their dividends, but Pembina stock was also able to gain over 16% over the past three years, outperforming both of its Canadian counterparts, Enbridge (NYSE:ENB) and TC Energy (NYSE:TRP).

Pembina's focus in Alberta and British Columbia positions the company well for the possibility to export liquefied natural gas to Asia. In October 2018, energy behemoth Royal Dutch Shell (NYSE:RDS.A) (NYSE:RDS.B) announced its plans to develop LNG Canada, which is expected to be a major liquefied natural gas (LNG) processing and export facility in Western Canada. The conversation of LNG leads us to our next company, Cheniere Energy (NYSEMKT:LNG).

The future prospects of U.S. natural gas production bode well for Cheniere, which is playing the market by investing in massive LNG infrastructure projects consisting of pipelines, liquefaction facilities, export terminals, and production assets. Lacking a dividend, Cheniere is a stock for investors looking for a high risk/high reward play in natural gas. To protect itself from commodity price swings, Cheniere has adopted a long-term, fixed-fee contract model, which is similar to traditional pipeline companies.

Cheniere's main focus is on two major projects, the Sabine Pass LNG Terminal and Liquefaction Project and the Corpus Christi Liquefaction Project. Across the two projects, Cheniere has built seven, out of its planned nine, liquefaction trains. Cheniere's full aspirations aren't expected to come true until at least 2023, so this stock is one that investors should be patient with.

A higher-risk, high-reward option is Tellurian (NASDAQ:TELL), the product of ex-Cheniere management that wanted to do things their own way. Tellurian's main goal is to build its Driftwood LNG Terminal and all-purpose facility capable of exporting 4.0 bcf/d of natural gas, more than Cheniere's Sabine Pass project.

In terms of earnings potential, Tellurian expects Driftwood to generate over $2 billion in cash flow or over $8.51 per share under a five-plant case. It expects to fund the development of the facility by selling a portion of it to its customers. The stock currently trades at less than $7.5 per share, offering a lot of upside but also a lot of risks that aren't expected to pay off until at least 2023. Unlike Cheniere, who has operational trains, Tellurian is still looking to get Driftwood somewhat operational.

Last fall, Tellurian signed the largest-ever LNG deal in U.S. history with the largest Indian importer of LNG, Petronet LNG, a good fit for a small energy start-up in need of reliable buyers and a booming Indian energy market in need of LNG. According to a recent press release, Petronet will secure five out of the total 27.60 million metric tons of LNG per year from Driftwood.

Kinder Morgan, Pembina Pipeline, Cheniere, and Tellurian provide an attractive medley of income and growth for investors looking to get into in the natural gas market. For investors interested in taking 2020 easy after a meteoric rise in 2019, consider leaning toward Kinder Morgan and Pembina. For those with a long-term time horizon and a belief in the U.S. natural gas export market, Cheniere and Tellurian could be worth considering.