Oil stocks are surely caught in one of the worst times ever. The coronavirus pandemic has led many countries to impose travel restrictions, lock-downs, or other measures that have significantly reduced the demand for oil and refined products. On the supply side, while OPEC and other countries have agreed on production cuts, those may not be enough considering the extent of demand destruction. This got reflected in the muted response of oil prices following the agreement. However, it's still a significant development that should help support oil prices over time when demand begins to rise again.

Still, the energy sector is facing significant headwinds. Energy stock prices will likely remain volatile in the short term. But there are attractive opportunities for those looking to invest for the long term and can stomach short-term volatility. Three energy stocks that should do well in the long-term are TC Energy (NYSE:TRP), Enterprise Products Partners (NYSE:EPD), and Phillips 66 (NYSE:PSX). 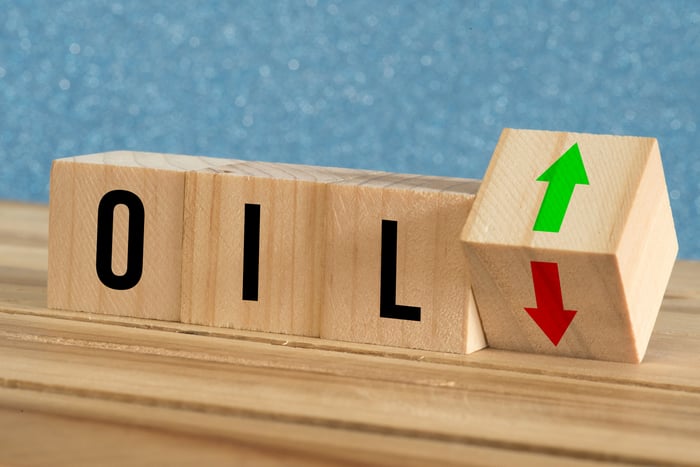 TC Energy has been providing midstream energy services for more than 65 years. The company transports and stores natural gas, crude oil, and liquids, as well as generates power. TC Energy's natural gas pipelines are mostly regulated in all the three countries where it operates -- Canada, the US, and Mexico. Regulated rates allow the company to recover the costs incurred to operate the pipeline network by collecting tolls, which include both a return on capital invested in the assets (called rate base), as well as recovery of the rate base through depreciation. Moreover, most of TC Energy's assets are backed by long-term contracts. Long-term contracts with regulated rates make TC Energy's earnings from such assets quite stable.

One of the key competitive strengths of TC Energy is its pipeline footprints. The company has strong footprint in two key supply regions -- the Western Canada Sedimentary Basin or WCSB in Canada and the Appalachian basin in the US -- connecting them to the demand centers.

Notably, if the oil and gas production levels drop, the volumes on TC Energy's pipelines may drop. The company is also exposed to risks if any producer customers go bankrupt. Moreover, as production dwindles, the competition among existing pipeline operators significantly increases, forcing them to reduce rates. For TC Energy, this is especially important in the US, where the Federal Energy Regulatory Commission approves a maximum rate, and the company contracts at negotiated rates with shippers. So, like other energy companies, TC Energy also faces risks.

However, with its diversified operations, lower-risk business model, and a conservative financial profile, the company is better positioned to both maintain its payouts and grow in the long term. 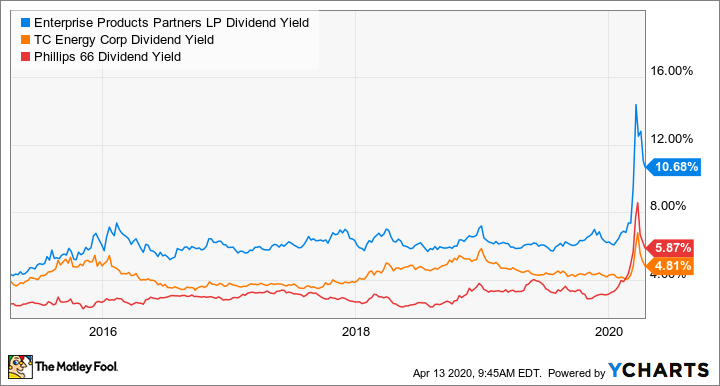 The master limited partnership MLP is evaluating opportunities to defer its capital expenditures in response to lower commodity prices and demand. A competitive and diversified asset base combined with conservative leverage makes Enterprise Products Partners' yield attractive, even though the stock may remain volatile in the near term.

In response to the demand destruction from COVID-19 and lower commodity prices, Phillips 66 has reduced its capital spending for 2020 by $700 million to $3.1 billion. The company has also temporarily suspended share repurchases and has entered into a new $1 billion loan facility. These steps, combined with a conservative debt-to-capital ratio of 30%, should help Phillips 66 maintain its dividend payments.

The company is currently witnessing a 20% to 30% drop in gasoline demand in the US. It expects its refinery utilization in the first quarter to drop to low-to-mid-80%. However, the demand for diesel, used primarily in trucks and heavy vehicles, isn't impacted that much. Similarly, a fall in jet fuel demand shouldn't impact Phillips 66 much. The refiner can shift roughly half of its jet fuel production to gasoline or distillate. It currently makes just around 225,000 barrels/day of jet fuel against 1.8 million barrels/day of its total production.

Phillips 66 Partners (NYSE: PSXP), the MLP subsidiary of Phillips 66, accounts for roughly 60% of its midstream earnings. Around 80% to 85% of the company's midstream revenues from Phillips 66 Partners are protected under minimum volume commitments. Further, around 85% of PSXP's customers are investment grade.  This minimizes the company's counterparty credit risk. At the same time, Phillips 66's petrochemicals business, consisting of CPChem, hasn't seen a huge dip in margins and volumes. All in all, Phillips 66 is one of the top oil stocks to buy for the longer term.