As the oil industry collapses and companies scrape to survive, the renewable energy industry is booming. According to Bloomberg New Energy Finance, between 2010 and 2019, renewable energy capacity quadrupled from 414 gigawatts (GW) to 1,650 GW and solar energy exploded from 25 GW to 663 GW. That growth presents an incredible opportunity for investors if they pick the right stocks.

We asked our energy experts for their top renewable energy picks and First Solar (NASDAQ:FSLR), Brookfield Renewable Partners (NYSE:BEP), Clearway Energy (NYSE:CWEN), NextEra Energy (NYSE:NEE), and Vivint Solar (NYSE:VSLR) all made the cut. They have different angles on the future of renewable energy, but they're all well-positioned for long-term growth as the industry grows. 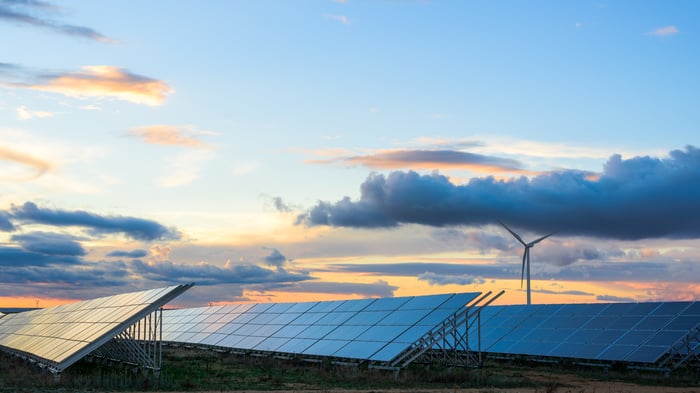 The best-built solar panel maker is on sale

Jason Hall (First Solar): We have seen more consolidation in the solar industry in recent years, and further consolidation should help the industry grow in a more steady and profitable way. First Solar is the best-positioned solar panel maker to profit going forward.

The company's thin-film technology has proven a durable competitive advantage in the utility-scale space. Competitors may have panels with better raw efficiency ratings, but First Solar's technology gives more consistent performance across environmental variables, like temperature and humidity, that negatively affect power output. For power companies, predictability of power generation trumps potential that may not be realistic.

The company's historical gross margins offer some insight into its competitiveness: 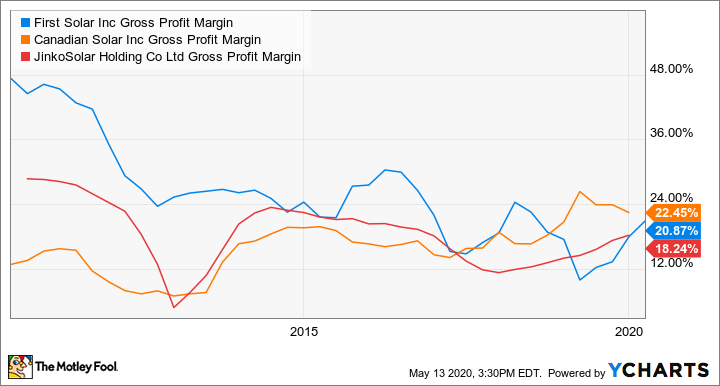 Last year's margins dip was related to investments in bringing its latest product to market, and as you can see, margins recovered to start 2020.

More evidence of First Solar's edge in solar is its balance sheet. While competitors carry billions in debt and less cash, First Solar has over $1 billion in net cash and has carried more cash than debt for almost a decade. This strong balance sheet is a huge advantage, letting management operate from a position of strength across the entire cycle.

At recent prices, First Solar shares are down 35% over the past year, worth buying on the market's uncertainty. That's a fair price to pay for the leader in solar panels, and a much better investment than almost anything you'll find in the oil patch.

Long-term wealth creation is hard, but Brookfield has been getting it done

Tyler Crowe (Brookfield Renewable Partners): For all the accolades we can pour on renewables, the industry doesn't have much of a track record when it comes to creating long term wealth for investors. Technology develops so quickly that companies put in hundreds of millions in research and development for a product that could be obsolete in less than three years.

Fortunately, Brookfield Renewable Partners isn't in the business of developing new technologies and selling them. Rather, the company owns and operates renewable power generating assets under long-term power purchase contracts.

One element that has made Brookfield Renewable a wealth builder is its hydroelectric power assets. These long-life assets have been a tremendous cash engine for Brookfield, helping to support an investment-grade balance sheet and allowing it to reward investors with a growing payout and give management some additional cash to grow the partnership. Another element of Brookfield's success has been its management's ability to find assets selling at steep discounts. These elements have translated into fantastic returns for investors over the past decade. 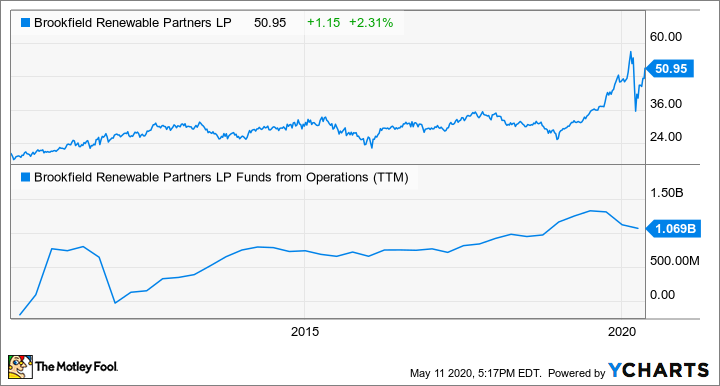 While funds from operations have declined slightly over the past couple of quarters, it's largely from an asset sale. Management has used that asset sale to put some extra cash on the balance sheet, which will likely be used for an acquisition in the future. This has been a common tactic that Brookfield has used to most effectively deploy its capital.

Brookfield's assets are built to handle the ups and downs of the economic cycles, and its management team has been fantastic stewards of shareholder capital. With a distribution yield of 4.4%, that's a compelling offer in the renewable energy industry.

A clear path to dividend growth

Matt DiLallo (Clearway Energy): Renewable energy yieldco Clearway Energy has had its ups and downs over the past few years. One of those disappointments came when its largest customer, California electric utility PG&E (NYSE:PCG), filed for bankruptcy last year. While that company continued to purchase power from Clearway Energy, its lenders restricted its access to that money. Because of that, it had to cut its dividend even as the cash continued to pile up.

In the meantime, Clearway has been busy diversifying its operations. It made several acquisitions last year, which have it on track to generate $310 million in cash available for dividends (CAFD) this year, a 22% increase from 2019's level. That allowed Clearway to boost its reset dividend by 5% earlier this year.

Meanwhile, the company recently agreed to invest $241 million in three wind projects, which will provide it with $23 million in annual CAFD when those transactions close by early next year. Those new additions will give it more power to grow its dividend in the future.

Speaking of the payout, Clearway plans to normalize it once PG&E emerges from bankruptcy, which could come sometime this summer. Add that catalyst to the visible growth it has on the horizon from its wind transactions and other opportunities it has on the pipeline, and Clearway is a great way to invest in renewable energy.

Half renewable, half utility

John Bromels (NextEra Energy): For energy investors looking for reliable investments, the oil industry's not looking so hot right now. Not only have share prices tumbled, but many oil companies have slashed or suspended their dividends. Even massive oil major Royal Dutch Shell just cut its payout!

However, electric utilities are doing just fine, including the world's largest, NextEra Energy. Serving communities in Florida through its Florida Power & Light and Gulf Power subsidiaries, NextEra pulls in a steady -- and steadily growing -- stream of cash.

It uses some of that cash to invest in renewable power generation. NextEra is one of the largest generators of renewable power in the country, with a network of solar and wind farms that stretches from coast to coast. It sends about half of its 46 gigawatts of power generation capacity to its Florida utilities, and sells the rest to other utilities.

NextEra's shares are down about 5.6% so far this year, but it yields a decent 2.3%. Now is a great time to invest in this stable yet growing renewable energy stock. 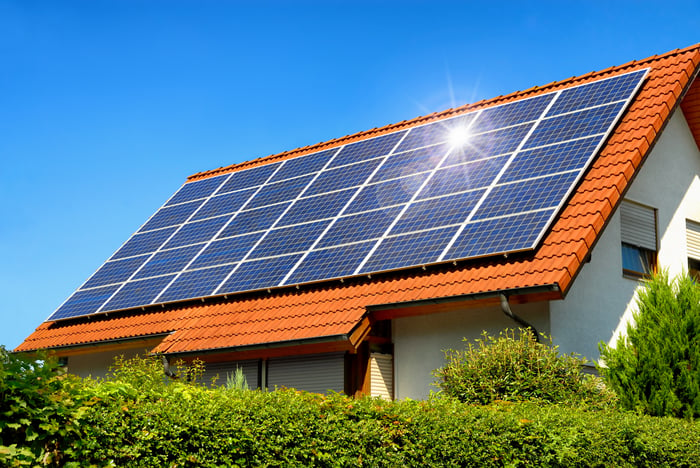 Residential solar is the future

Travis Hoium (Vivint Solar): More than 1 million U.S. homes now have solar energy on their roofs and long term, that number is only going to grow. Rooftop solar energy is now cost-competitive with electricity from the grid for most consumers, and new features like energy storage will make consumers even more energy independent.

One of the country's biggest solar companies is Vivint Solar, which is involved in the sales, installation, and financing of rooftop solar. Its value is in financing solar with a $0 down model for consumers who then agree to pay for the electricity a solar installation provides over the course of 20 years or more. Vivint Solar then packages the solar tax benefits and customer cash flows and sells them to investors, keeping the net value that it calls retained value. As of the end of the first quarter of 2020, the estimated net retained value was $10.00 per share, well above the stock's price of $5.75 as of this writing.

Vivint Solar's stock has value just from what's on the balance sheet, but I like its future position as well. As installers add products like energy storage to solar systems, they will play a role in controlling and generating value for both homeowners and utilities. That'll make the business stickier and more valuable with each installation. There's value in the stock today, but long term, I think that value is going to grow.

Renewable energy is the future

There's little doubt that renewable energy is going to drive the future of energy. Wind and solar are now competitive with fossil fuels in electricity generation, and electric vehicles are disrupting transportation.

Rather than fighting the future with oil stocks, investors should ride this wave of growth with these five renewable energy picks.