When positioning your retirement fund for the long-term horizon, perhaps three or four decades down the road, be sure to save room in your portfolio for environmental, social, and governance (ESG) stocks. Sure, these companies may involve novel strategies and may not be as well tested as other industries, but they are based on growing trends that are becoming more mainstream with each passing day. Taking a long approach based on companies that will drive the way the world is changing is a winning strategy in my opinion. 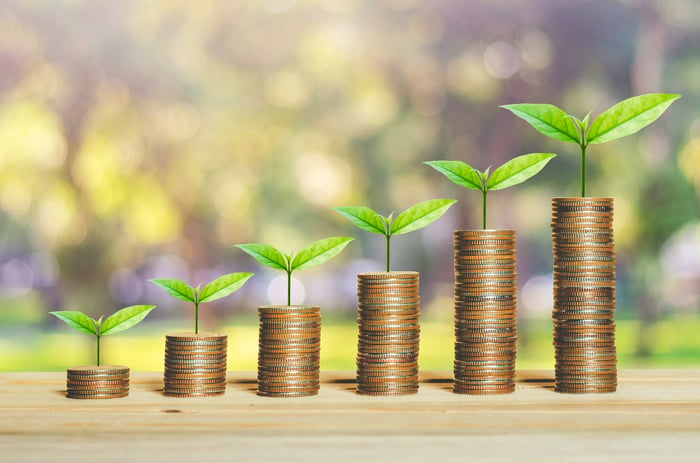 These days, future retirees need to be a little more aggressive in their planning. If you retire at 65, that could still result in a 20-year to 30-year retirement period that requires a lot of money to sustain. The good news is that in the long term, equities and markets generally appreciate. For instance, the S&P 500 Index has an average annual return of roughly 8% between 1957 and 2018. So, you want a portfolio based on industries that will still be around and relevant in the future, as well as industries that can grow.

ESG stocks meet both of these definitions because they are only expected to gain in relevance, and have high growth potential in many cases. Climate change, for instance, is the largest environmental issue facing the world today, and people and politicians have taken notice and vowed to make change.

Last year, the United Nations received pledges from more than 60 countries that will attempt to get their net carbon emissions to zero by 2050 . California and New York have made similar pledges. Achieving these goals in just 30 years will require large-scale investments in electric vehicles and renewable sources of energy such as solar and wind.

A good indicator of the growing trend is that many more established companies are taking on big ESG initiatives. Amazon (NASDAQ:AMZN) leader Jeff Bezos said the e-commerce giant would be net carbon neutral by 2040, and purchase 100,000 electric vehicles as part of that plan .

Even in the mundane industry of banking, Citigroup (NYSE:C) recently announced that by 2030, the bank would have zero exposure to thermal coal mining . Citigroup also recently launched an investment banking division solely dedicated to ESG issues.

There are a few different routes you could go in terms of ESG. While sticking to larger and safer companies that have a history of profitability and paying a dividend, you could invest in companies that directly produce products or services that advance ESG efforts. Examples include NextEra Energy (NYSE:NEE), which is one of the largest energy companies in the world and has a huge wind and solar business, or perhaps Ormat Technologies (NYSE: ORA), a renewable and alternative energy provider.

Both of these companies are big and well-known, but also have huge potential when you consider that renewable energy sources only made up 11% of all U.S. energy used in 2018, according to the University of Michigan .

Then there's the electric carmaker Tesla (NASDAQ:TSLA). The stock already trades at over $1,100 per share as of this writing, but the global electric vehicle count was only 7.2 million in 2019, according to the International Energy Agency. That number could reach 245 million by 2030 . Tesla has never had a profitable year, but being a leader in electric vehicles, it is well positioned to take advantage of what should be a fast-growing segment over the next few years and decades.

But let's say you are skeptical about these 2050 carbon neutral goals, or perhaps think a better source of renewable energy may come along and dethrone wind and solar, or electric cars.

You could still invest in blue chip stocks that are committed to ESG issues. One example is Microsoft (NASDAQ:MSFT), a tech company known for making computers, consumer technology, and other electronics. Its main business may not be ESG, but the company has announced its intention to be carbon negative in just 10 years . Additionally, Microsoft co-founder Bill Gates has dedicated a lot of his wealth to philanthropy. The Bill and Melinda Gates Foundation has donated more than $45 billion since 1994, according to CNBC .

If you want further diversification, invest in an ESG fund, which tracks a number of ESG stocks. American ESG funds performed better than their traditional counterparts in 2019, according to Morningstar .

Strong prospects based on trends

If you're planning for retirement a ways down the road, you want to fill your portfolio with stocks that will grow your savings in the long term. ESG stocks and funds fit this requirement because issues like climate change will not be solved overnight. Not only are many of these stocks in imperative industries, but also in what are expected to be fast-growing industries. A balanced selection of more established companies dedicated to improving ESG issues and those with more direct involvement in ESG should bode well for your portfolio.