The first six months of 2020 have wreaked all kinds of havoc on our retirement plans. Stock market volatility has seen portfolio values plunge, and massive unemployment has led many people to tap their retirement savings early to pay the bills. It's natural for people to seek ways to preserve their savings or even turn the situation to their advantage.

One option worth considering is a Roth IRA conversion. Approximately 10% of people surveyed by TD Ameritrade said they've already done this, and another 17% are considering it. Here's what you need to know to decide if it's the right move for you this year. 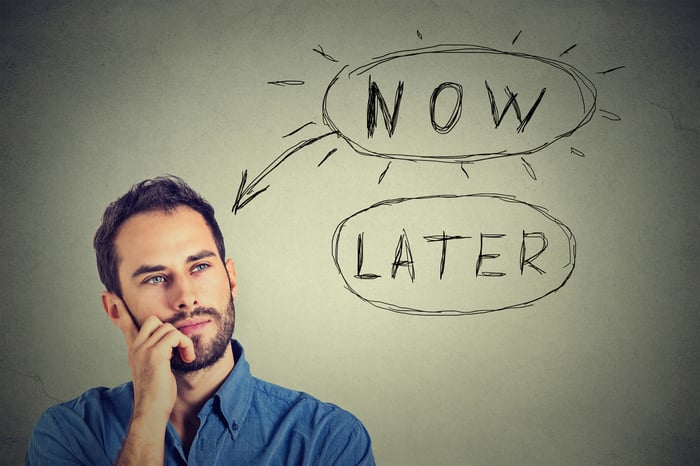 What is a Roth IRA conversion?

A Roth IRA conversion is when you move money from tax-deferred retirement savings in accounts like traditional IRAs and 401(k) plans into a Roth IRA. Traditional IRA and 401(k) contributions lower your taxable income in the year you make them. Roth retirement contributions do not, which makes them seem less attractive at first. But unlike traditional retirement accounts, your Roth savings grows tax-free, and you usually don't have to pay taxes on money you withdraw from your Roth.

You can't convert a Roth to a traditional IRA. You can, however, change traditional IRA or 401(k) retirement plan accounts into Roth savings if you pay taxes on the funds you want to convert. This increases your tax bill in the year of the conversion. You can't tap into any of your retirement savings to help cover the taxes because withdrawing before 59 1/2 usually results in a 10% penalty. The penalty is waived this year due to the pandemic, but withdrawing savings to cover the taxes only sets your retirement savings back, so avoid it if you can.

There's no way to get around owing the taxes, but the unique economic conditions right now could make this conversion a little more affordable this year than it otherwise would be.

There are two key reasons 2020 could be a smart time for a Roth IRA conversion. The first is that many people's investment portfolios are down right now. That's not normally a good thing, but in this case, it is.

Let's say you had $10,000 in a traditional IRA at the end of last year. If you'd wanted to do a Roth IRA conversion then, you would've had to pay taxes on the full $10,000 you converted. But if your assets are now only worth $9,000 due to the market downturn and pandemic recession, you would only have to pay taxes on an extra $9,000 to convert the same amount of assets from traditional retirement accounts to a Roth. That saves you taxes on $1,000.

Hopefully, your retirement savings will begin to recover once you've done the conversion, but at that point, all of your earnings will be tax-free, as long as you wait until you're at least 59 1/2 and have had the account for at least five years before withdrawing the funds.

This year might also be a good time to do a Roth IRA conversion if you were unable to work during the shutdown and earned less on unemployment than you did while working. You'll likely have a smaller tax bill this year than normal. You could even end up in a lower tax bracket where you'll lose a smaller percentage of your income to the government.

Obviously, doing a Roth conversion will raise your tax bill somewhat. But you'll likely still end up paying less in taxes if you do the conversion this year than you would in a year when your income was higher.

A Roth IRA conversion isn't right for everyone. If you're earning more this year than you do in a typical year, doing the conversion now could raise your tax bill even higher. That could cost you more money than waiting to do the conversion in a later year when your earnings are lower.

If you decide to go through with it, you must be prepared for taxes. You won't necessarily owe the government money. You may just get a smaller tax refund. But if you normally owe money or your refund is usually small, you should prepare yourself for a bill this year by setting aside any extra savings you have in a designated savings account.

Is 2020 a Smart Time to Do a Roth IRA Conversion? @themotleyfool #stocks Next Article
Current