Companies can remain undervalued for a very long time, but often, they eventually gravitate toward the price they are worth -- no matter how cheaply they've been trading.

Even though a new bull market cycle has just begun, stocks are already soaring, and there's no end in sight. It could really pay off to grab some of the most undervalued companies right now, while they're still cheap. 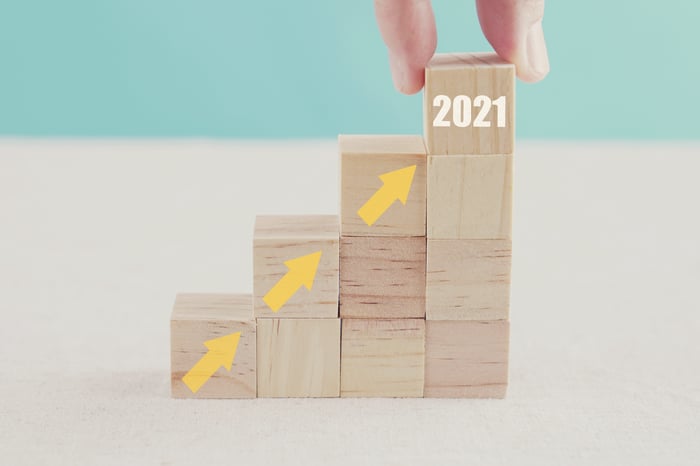 Trading at just 0.4 times revenue, GameStop (NYSE:GME) is severely undervalued because, well, everyone seems to doubt it -- and not for unjustifiable reasons. In fact, over $1.36 billion of the company's $2.19 billion worth of shares are sold short. Many investors see no reason not to bet against a brick-and-mortar retailer that is still selling physical copies of video games when they are nearly universally available online.

If this is your view, you may be surprised to learn that GameStop is still doing pretty well despite its fair share of challenges. During its nine-week holiday sale ended Jan. 2, the company managed to bring in $1.77 billion in revenue, a modest decline of 3.1% from the same period last year. But in the interim, management closed 11% of its stores for being unprofitable; after adjusting for that, sales for the remaining locations actually went up.

GameStop now has a robust e-commerce segment -- it's growing at a stunning rate of 309% year over year, and it accounts for over a third of total revenue. Last year, management signed an agreement with Microsoft to update its stores with the tech giant's software and cloud data solutions. In return, GameStop will be eligible for a commission on all digital revenue (such as video game purchases) generated from Microsoft's Xbox platform.

Given these catalysts, I expect GameStop to turn around its operations in no time. Over the past year, its stock is already up a whopping 683%. Even after an amazing run up, though, its market cap ($2.6 billion) is still less than half its annual revenue ($6.46 billion). That makes for a price-to-sales ratios (P/S) far lower than what most retailers are trading at. If you're looking for stocks with the potential to double over time, consider GameStop.

Criteo (NASDAQ:CRTO) is one of the world's leading ad-retargeting companies, aggregating $2 billion in daily online sales worldwide. Using its proprietary algorithmic engine, the company helps e-commerce firms market their goods to consumers who may be hesitant to buy after an initial impression via strategic advertising.

The problem with Criteo's business model is that it relies on analysis of third-party cookies to predict consumer behavior -- and that gives rise to privacy concerns. In response, major internet browsers such as Chrome, Safari, and Mozilla Firefox are either blocking access to third-party cookies or phasing them out entirely.

All this has hammered Criteo's stock, but the company is rapidly reinventing itself to survive. At the moment, roughly 20% of revenue comes from its new media segment, which offers brand advertisements for direct placement on retailers' platforms, thereby enhancing customer engagement and conversion.

Sales in this new segment are increasing at a rate of over 50% year over year. Even though its former core business of retargeting through cookies is on the decline, Criteo still generates about $186 million in net revenue and $38 million in free cash flow per quarter.

Amazingly, Criteo trades for just 0.5 times sales and 9.2 times net earnings, which is probably as cheap as a tech company gets. Indeed, other sector players are trading for upwards of 15 times revenue and 200 times price-to-earnings (P/E). For these reasons, I think it's safe to call Criteo a bargain tech stock.

Biotech Novavax (NASDAQ:NVAX) is on the verge of developing a successful coronavirus vaccine, but its market cap is only a meager $8.65 billion. Even though the stock shot up a stunning 2,200% over the past twelve months, that valuation is low given that the company has already secured agreements with a contract manufacturing organization to produce 2 billion doses of its coronavirus vaccine candidate, NVX-CoV2373, this year (contingent on regulatory approval).

NVX-CoV2373 is composed of synthetic viral proteins of the SARS-CoV-2 virus. In a peer-reviewed phase 1 clinical trial, 100% of participants who received the experimental vaccine developed neutralizing antibodies against the disease. There were only mild to moderate side effects associated with the vaccine candidate, such as muscle pain, headaches, and fatigue. It is also stable at normal refrigeration temperatures, increasing the ease of transportation and delivery.

Phase 2 testing subsequently reproduced these results, and management expects data from phase 3 data in the first quarter of 2021. So far, Novavax has received over $2 billion in funding from various government agencies and initiatives (including the Trump administration's Operation Warp Speed) to develop its experimental vaccine. It recently finalized an agreement with the government of Australia for the delivery of 51 million doses.

Given the opportunity to make upward of 10 to 11 figures in revenue, assuming NVX-CoV2373 wins approvals, the stock seems ridiculously inexpensive trading at 2.4 times forward sales. I think it would be more fair if Novavax's stock price was two or three times higher than it is today. That would be more in-line with its competitor Moderna's valuation, which is currently at five times forward revenue. If you are a curious healthcare investor looking for undervalued biotechs, I think that Novavax is a safe bet for 2021.